Prince spent the weekend in Paris at a number of fashion shows and performed at Le Grand Paliais in French capital on Sunday night (October 12). 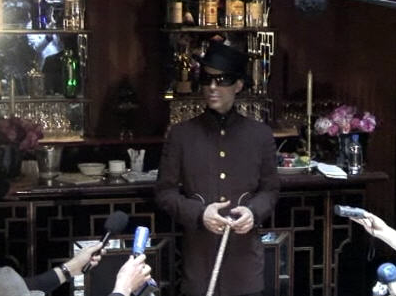 Get bits of an interview with prince below

Watch Prince’s performance video, and hear an interview with the iconic musician.

So does that mean Prince doesn’t even like french fries? -Dr.FB

Prince’s Sunday concerts were last-minute affairs, organised in four to five days, after the 51-year-old artist visited and fell in love with the vast hall on the banks of the Seine river.

On Monday he met a small group of journalists, including AFP, in a chic Paris hotel. Following are excerpts from the hour-long chat.

Q: Why did you choose the Grand Palais?

Prince: When I did “21 nights” in London, the sound of the audience was so powerful that I needed something better and bigger. And when I saw the Chanel fashion show (last week) and Karl (Lagerfeld) came out and there was this roar that came up, I was jealous.

Q: You fell in love with the Grand Palais. Do you fall in love often?

Prince: I needed some place to stay and that was the best that you could do, so…

Q: What did you think about yesterday’s shows?

Prince: They were my favourite so far. I always try to outdo the different shows that I’ve done.

Q: Can you define the pleasure of being on stage and making music?

Prince: I was telling a friend of mine recently that it feels like I’m in a dream and I don’t like to go to sleep anymore, because the dream is never as good as real life.

Q: What did you think about the crowd last night?

Prince: Amazing. It is actually indescribable, that much love. They were very respectful. We asked that no one used camera phones and they honoured that request, unlike Americans who are so obsessed with technology. We don’t like to have our concert filmed that way because it sounds so bad and then you give all the footage to somebody like YouTube who is run by Universal Publishing, and some of those same lawyers.

Q: What about your time in Paris? Does the city bring you inspiration?

Q: When you sing “Dance For Me”, are you thinking about somebody special?

Prince: Yes. I was looking in the mirror when I wrote it.

Q: You struggled a lot for you artistic freedom and now it seems you are totally free. How does it feel?

Prince: These are the days I was looking forward to. It’s hard to sleep because the options are so numerous. It was worth the fight, it was worth the struggle. I advise every artist to go through it if they can. The cream rises to the top anyway. A real free music doesn’t mean that you don’t pay for it, it just means there are no authoritarian figures telling you what you’re supposed to do with it.

Q: Is the Internet opening new doors for you?

Prince: It’s a tool. It’s not a means to an end. My concerts have always been dear to me and it’s almost a shame I got so good at making records because the media is dying now, so until something new happens and we get some laws and restrictions to how the media is used and the revenue is shared, then I’ll just stick with the live stuff and every once in a while I’ll do records.

Q: Are you a happy man today?

Q: If you changed your name again today, what would you change it for?

Prince: I like this name. I think it fits.

Prince: If you can describe it, you ain’t funky.

Q: Are there any questions you want us to ask you?

Prince: Ask me about God. We need him. We all do.