In the ’90s, we all watched The X-Files for the same reason: to see if Mulder and Scully were ever going to sleep together. When not wading through sexual tension, though, we were occasionally amused, frightened, and, yes, even scared out of our minds.

In homage to those bygone days of the young, super-sexy David Duchovny and scorching red-haired Gillian Anderson, we bring you a list of the 12 episodes most likely to build new phobias for the show’s devoted fans. For instance, I never once thought to look down the disgusting porta potty hole until a certain X-Files episode. (Trust me; it’s in your best interest.)

We all feel so safe in our snug houses, with the doors and windows all locked. Enter Eugene Tooms and you’re not so safe anymore. Tooms is a genetic mutant who can stretch to fit through any space. He wakes every 30 years to harvest human livers and then hibernates after killing his fill. In the concluding episode of this horrific character, Mulder faces off with a naked bile-covered Tooms under an escalator and eventually crushes the monster to death using said elevator. Our livers may be intact, but our collective psyche never was again.

So, this fancy team of scientists drills further than anyone in history into the depths of the Arctic ice. Then, they all kill each other. Mulder and Scully hop on a plane to investigate and find themselves trapped. It turns out the drilling team unearthed a parasite that infects the human body and increases the host’s feelings of anger and paranoia. Trapped in the Arctic? I would already feel nervous. Add a murderous parasite? Now, I’m terrified. Mulder and Scully, along with the remaining scientists, have to figure out who’s infected before they all end up dead. Remind me never to be scientifically curious again.

In this episode, a mortuary worker becomes fixated on the nice hair and fingernails of pretty corpses. He soon goes for living victims, but only if his living victims have nice hair and nails. Before murdering women, though, he at least gives them a nice, romantic bath and hair washing. (How sweet.) With Scully’s sassy, red hair, she, of course, becomes a target and Mulder has to save her. The actor who plays psychopath, Donald Pfaster, is creepy enough, but there’s one moment when Scully even thinks she sees Pfaster as a demon. And you thought it was safe to get your nails done! Chew those cuticles, girl, and quick!

People have been going missing in a small, rural town, famous for its chicken processing plant. Mulder and Scully investigate and soon find hundreds of human bones in the nearby river. Turns out, the whole town is full of cannibals who prolong their lives by eating human flesh under the cover of the chicken factory. They even try to eat our beloved agents. Rude. I couldn’t eat meat for a month after this episode, and I still thoroughly investigate all store-bought chicken for human bones and teeth. Can’t be too careful. 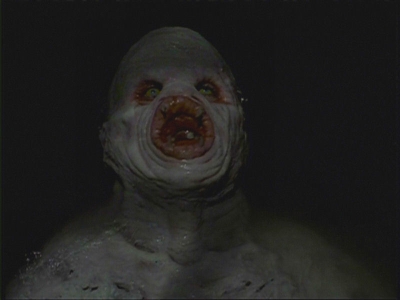 A body shows up in the New Jersey sewers and Mulder goes alone to check things out. He thinks his boss, Skinner, has sent him on a boring assignment. Instead, he finds the Flukeman, a product of the Chernobyl disaster, running amok in the city’s sewers. Remember how I mentioned earlier that I always look down the porta potty before taking a seat? It’s thanks to this episode, where one shot shows the Flukeman looking up from the bottom of an outhouse. No, sir. No, thank you. Porta potties are scary enough; add a murderous human mutant who wants to suck the life out of you? What a nightmare. 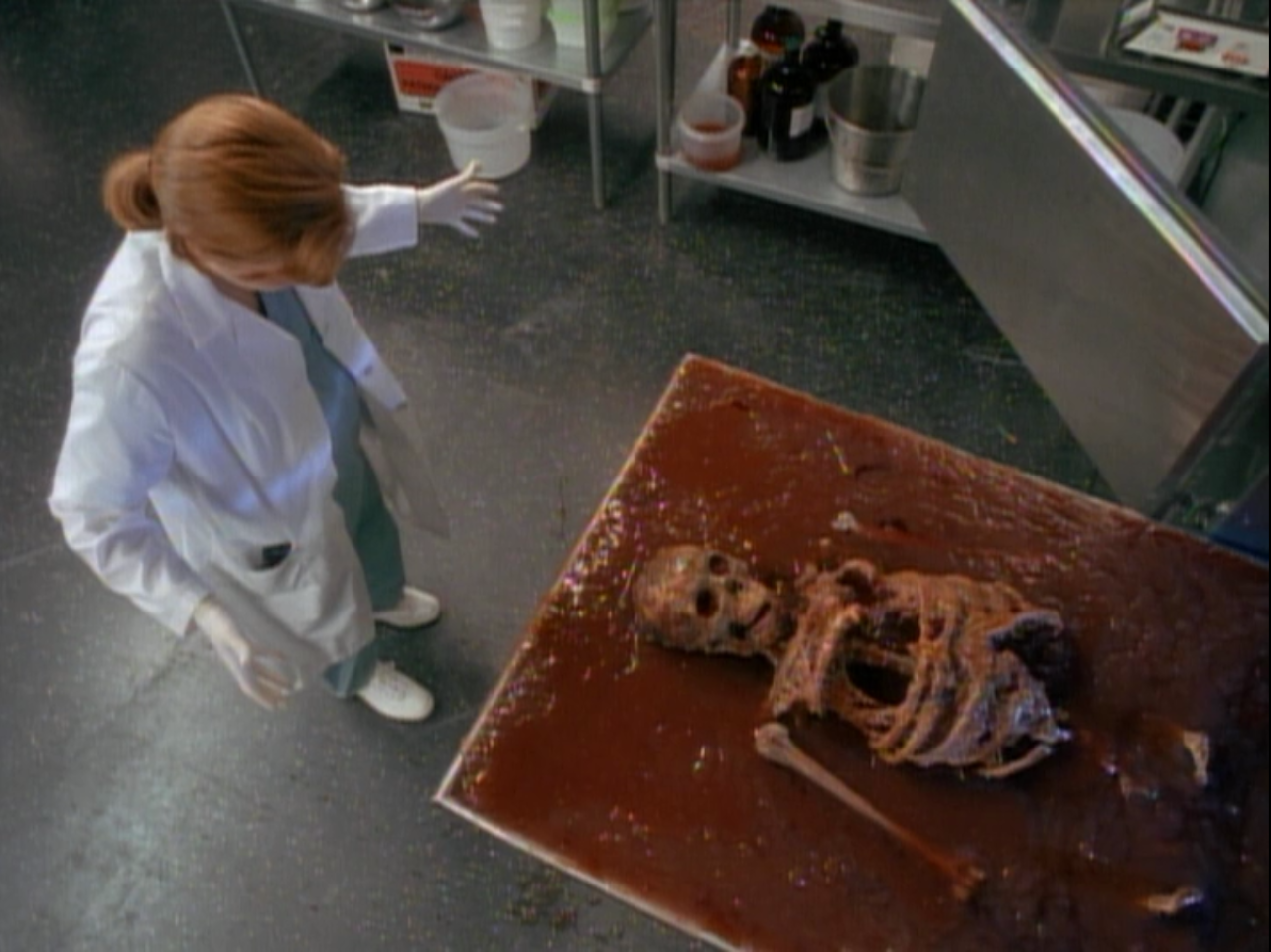 Sure, meeting someone on a blind date isn’t the most fun, but when he wants to murder you by sucking the fat off your body? That’s a bad date. Mulder and Scully hunt a predator who’s seducing chunky women via online chat rooms. He meets them and eats their fat, leaving a gelatinous residue of a human being behind. It’s not his fault, see? He has to digest people to live. Can’t blame the guy. The key lesson here: If your blind date looks anything like a mutant serial killer, get the check and drive yourself home. 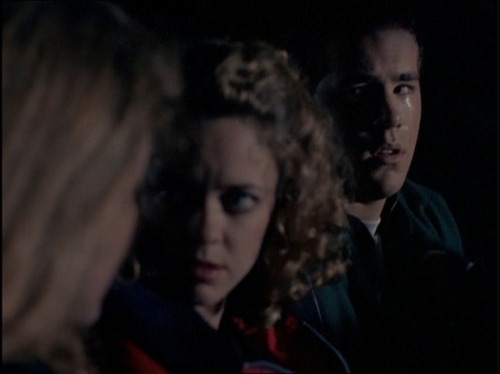 Ryan Reynolds is really young, cute … and gets murdered in this episode, and that’s not even the scariest part. No, two evil high school girls use their seemingly magic powers to kill people they don’t like, even one kid who gets crushed behind stadium bleachers. Turns out, the planets are in some weird alignment, which gives the girls power and makes everyone else act completely mad, including one local female detective who tries to bang Mulder in his hotel room. (Hot.) I’m already wary of teenagers (their insistence on bringing back ’80s styles is only one symptom of their lunacy). After this episode, I steer clear of all high school events when the moon is full.

Gargoyle statues are cool when they’re on the corners of Notre Dame. When they’re stuffed with the corpses of handsome, young men? Not so cool. In this episode, Mulder and Scully question a murderer who claims his crimes were actually committed by an evil gargoyle spirit. Mulder’s former mentor, Patterson, has been on the case for three years when he calls in his protégé, but Mulder is worried his old pal is a little obsessed. Then, Mulder gets obsessed, and Scully worries for his sanity. Rightly so, as the case made Patterson go mad. Turns out, he’s been murdering the young men… perhaps under the power of the gargoyle spirit? Mwahaha!

Are The X-Files‘ Mulder and Scully dating in real life?

For me, this is a well-founded phobia only further proven in “Pusher.” Mulder and Scully are on the case of a man who is able to bend the minds of other people to his will, even when his will is murderous. Modell (the pusher’s real name) develops an unhealthy interest in Mulder and soon uses his mind power to force the FBI agent into a dangerous game of Russian roulette. After watching this, you’ll want to ask Magneto if you can borrow his helmet. It’s no good when a psychopath tinkers with your brain.

Due to its graphic content, “Home” was never again aired on Fox after its initial premiere. Rightly so. It was the first X-Files episode to have a viewer discretion warning. The story: Mulder and Scully head to Pennsylvania to investigate the death of an infant with severe birth defects. There, they meet the Peacock family: a bunch of incestuous brothers who have been making babies with their monstrous mama. The Peacocks are vicious, violent killers and the only thing scarier than their attack scenes are scenes with their mama, who has to be wheeled out from under the bed like the creature she is. In the end, we get no resolution, so for all we know, the Peacocks could be your neighbors. Cheers!

A string of strange attacks occur in a hospital’s plastic surgery ward. It seems the doctors are going quite mad, maiming and murdering patients on the operating table. When Mulder and Scully arrive, they, of course, assume witchcraft. I mean, obviously, Scully. Now, they gotta find the witch before someone else loses a nose. The attack scenes are gross, but most off-putting: the idea that anything can happen to you while you’re in surgery and you are powerless to stop it.

Mulder is taken hostage, along with an entire office staff, by whom we assume is a mad man who thinks his boss is a giant, monster bug. Turns out, the guy isn’t mad, and his boss is a giant, monster bug. When the not-crazy guy dies, Mulder gains his second bite. Now, the insect boss is out to get him. Not only does this episode make the workplace into a place of nightmares, but I sure did look at my boss differently Monday morning. My advice? Check the eyes. If they’re giant and red, take that as a bad sign.

Did we miss anything? What was the episode that scared you the most? Tell us below!