The world’s weirdest feud just got even weirder: Billy Corgan is engaging CNN newsman Anderson Cooper in a full-blown catfight.

“So perhaps Billy Corgan is, I don’t know, off his alternative rocker,” Cooper joked during a bit on The Ridiculist. “But I think maybe there’s more to this, maybe he’s being ironic, or maybe when the cool rock stars start doing less rock-starry things, it kind of makes us face our own morality. See I want R.E.M. to stay just the way I know and love them — I don’t want ‘Everybody Hurts’ to suddenly be used in an Excedrin commercial.”

Anderson Cooper gets punk’d, gets the giggles for the 897th time (VIDEO)

Corgan, who takes his cats Miss Sammi and Mister Thom very seriously, fired back on Twitter.

But the spat did not end there. Corgan has apparently been quietly seething over this cat-astrophe for a month and a half, plotting his revenge against the Silver Fox, waiting to spring it at just the right moment. And the right moment was Thanksgiving.

Corgan debuted some new merchandise at a Smashing Pumpkins concert Thanksgiving night, and shared a pic of it on the Twitter for Madame ZuZu’s Teahouse, which he owns.

Anderson Cooper and Lady Gaga get hammered during an interview 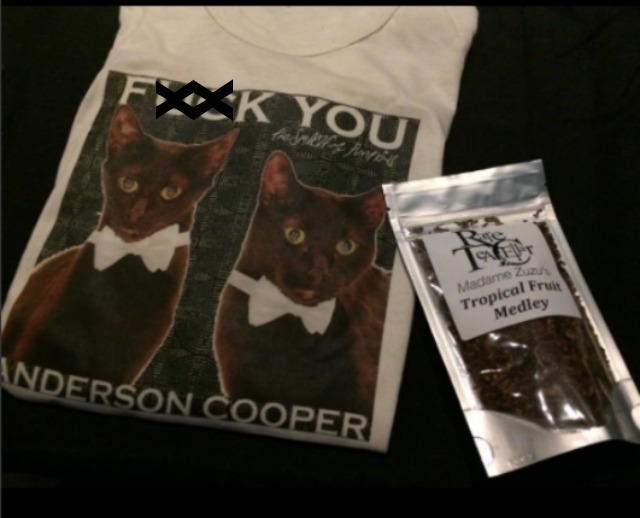