When two celebs go through a breakup, sensitive information is bound to come out, but Floyd Mayweather is taking things to an all-time low.

Mayweather, who is currently in the midst of a nasty breakup and a lawsuit with former fiancée, Shantel Jackson, decided it would be appropriate to post a photo on Instagram of private medical documents concerning Jackson’s alleged abortion earlier this year. Now, Mayweather is claiming that he had the right to post the documents because he’s famous, according to TMZ.

Jackson is suing Mayweather for assault, battery, defamation and invasion of privacy, among other things, because of the photo posted by her ex-love. The post is a screenshot of a document giving the details of the procedure, as well as a photo of an ultrasound. “The real reason me and Shantel Christine Jackson @missjackson broke up was because she got a abortion, and I’m totally against killing babies,” Mayweather wrote in the caption. “She killed our twin babies. #ShantelJackson #FloydMayweather #TheMoneyTeam #TMT.” 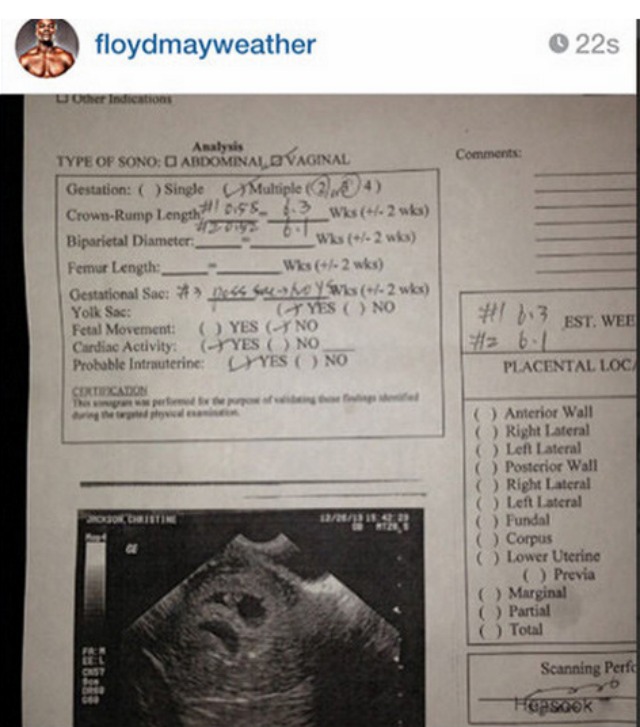 Now, Mayweather, who is also super close with none other than Justin Bieber, is on a mission to get Jackson’s claims dismissed. In court documents obtained by TMZ, Mayweather claims that Jackson was only with him to “get famous” and because he made her famous and they are public figures, he has the right to make anything public. “At age 37 I am an undefeated boxer,” he writes in the documents. “I have been the world champion in five different weight divisions… both parties are public figures. Abortion is a public issue.

Is anyone else disturbed by the hashtags he used in the post to promote his clothing brand, The Money Team? Also, we’re no medical experts, but in the document, the box in front of “Probable Intrauterine” is checked “yes,” which indicates there might have been a larger medical issue. Regardless of whether there was another issue or not, it’s pretty stomach turning that Mayweather would put this out on the internet only to hurt somebody he supposedly loved. It seems extremely immature and punitive.

For her part, Jackson has moved on and seems happy. She’s now dating rapper, Nelly.