Taylor Swift loves Joni Mitchell, but it doesn’t seem like the feeling is mutual.

#Tansel: 9 Sweet nothings Taylor Swift and Ansel Elgort whisper to each other

In 2012, a screenplay adapted from a book titled Girls Like Us was being kicked around Hollywood, according to E! Online. The book chronicles the lives of legendary songstresses Mitchell, Carole King and Carly Simon, and Swift was in talks to portray Mitchell.

Taylor Swift brought Christmas early to this mom and her son

Sounds pretty epic, right? Well, Mitchell doesn’t think so. In fact, she ixnayed Swift’s name from the running and laid the smack down on production of the film, as well. “I squelched that,” Mitchell recently said in an interview with the Sunday Times. “I said to the producer, ‘All you’ve got is a girl with high cheekbones.'”

Ouch. We’re not really sure if Mitchell is dissing Swift’s acting ability or her personal background, but if you compare the legendary Mitchell to Swift (who certainly seems like she’s on the path to being legendary), they have a lot more in common than meets the eye.

1. They are both talented songwriters

Mitchell has been called “one of the greatest songwriters ever” by Rolling Stone magazine and Swift has been writing her own music since she was a teenager. In a world where young pop stars writing their own lyrics is not the norm, there’s something to be said for those who still do.

2. They both pull heavily from their own love lives for inspiration

It’s no secret that if you date Swift, you’re gonna end up in a song. It’s like a parting gift. Like Swifty, Mitchell’s songs are often about love and loss. 1971’s “The Last Time I Saw Richard” is thought to be about her brief marriage to Chuck Mitchell and 1974’s “Help Me” is about falling in love with someone she knows she shouldn’t be with, just to name a few.

3. They both create music that transcends genre

Long before Swift decided that she didn’t want to be pigeonholed into one style of music, Mitchell was cultivating her own eclectic musical style. Like Swift, Mitchell was (and still is) hailed for blurring the lines of pop, jazz, rock, R&B and was even one of the first to dabble in electronic music.

4. Physical appearance (other than high cheekbones)

Swift may not be a dead ringer for Mitchell, but they certainly look like they could at least be related. Both have fair skin, sandy blond hair and similar face structures. 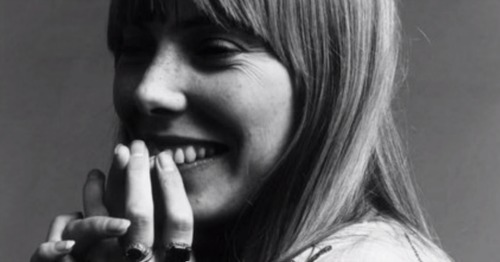 5. They both have a ton of awards

Both are heavily lauded artists. Notably, Mitchell has eight Grammys, while Swift is hot on her heels at seven.

Mitchell worked with jazz greats, Charles Mingus and Herbie Hancock, among others, and Swift has joined forces with Ed Sheeran, Colbie Caillat and B.o.B, to name a few.

7. New York is significant to both of their careers

Mitchell spent time in New York City and played a series of successful engagements that led to the launch of her mainstream career, according to Rolling Stone. Swift says she feels New York is pretty much the best thing that’s ever happened to her.

Though Mitchell and Swift do have quite a few things in common, their one major difference remains: Mitchell’s childhood was brutal, whereas Swift’s was not. But just because Swift didn’t endure the tribulations that Mitchell did, doesn’t mean she’s not sympathetic. In an interview with Rolling Stone, Swift says that her friends know it’s time to cut her off from drinking when she starts “crying for Joni.”