All great film franchises get an update sooner or later, so we’re not surprised to see Annie back at the cinema this Christmas. What we did find puzzling were some of the changes producers Jay Z and Will Smith made to this classic American story. Here are 13 of them.

The 1982 Annie movie and its inspiration, the stage musical Annie, both took place in the 1930s, which was Depression-era America. 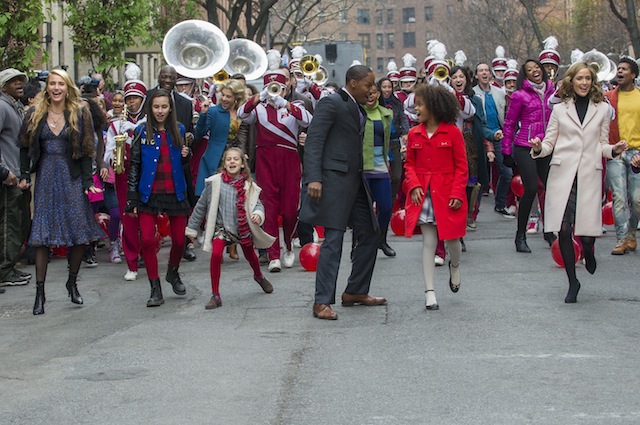 2. Annie no longer an “orphan”

Foster care has widely replaced orphanages in the United States, so it makes sense that Annie in 2014 is now a foster kid, giving her a hip, more urban image.

Aussie songstress Sia collaborated with Greg Kurstin, member of the indie-pop band Bird and the Bee, to write three songs: “Opportunity,” “Who Am I” and “Moonquake Lake.” Sia also paired up with English film composer David Arnold to write “This City’s Yours.”

In the film, Will Stacks takes Annie (Quvenzhané Wallis), to an exciting movie premiere — only the movie is a totally kooky sci-fi flick called Moonquake Lake. They show a scene that stars Mila Kunis and Ashton Kutcher, making for a fun, unexpected cameo. The scene also features a sexy “Fish Goddess.” We couldn’t help but wonder what the heck this had to do with Annie’s story.

During a crucial scene, Annie is asked to read a speech for Will Stacks in front of the media. But she runs out of the charity event because she’s unable to read.

To showcase New York City, Annie and Will Stacks take helicopter rides around the sparkling skyscrapers, making for an exciting visual.

When Annie’s supposed “real” parents come back for her, they have to take a DNA test to ensure that Annie is their biological child. Genetic testing to prove paternity became popular in the United States in the 1960s. 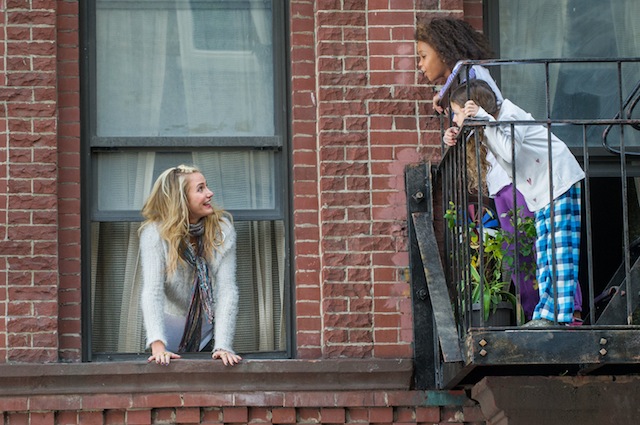 Considering comedy queen Carol Burnett played the orphanage’s den mother in the 1982 version, casting Cameron Diaz in the role is a totally different take on the character. Diaz is fantasic with physical humor and soars as the drunk little-girl hater.

Will Smith’s daughter was originally set to play Annie, but she aged out of the role during development of the script.

In 2012, Will Smith announced that Emma Thompson would pen the Annie screenplay. We’re not sure what happened, but the film’s director Will Gluck is credited as the screenwriter, along with Aline Brosh McKenna.

The film was originally set to release on Christmas Day, but Sony moved the opening day to Dec. 19, probably to avoid competing with the other big holiday musical, Into the Woods.

Toward the end of the film, Will Stacks and Grace (Rose Byrne) search for Annie using social media like Facebook and Twitter. The world sure has changed since the original Annie was written!