Looks like Pierce Brosnan’s son, Dylan, is a real chip off the old block.

His dad is arguably one of the sexiest Bonds to ever grace the big screen and, now, 17-year-old Dylan Brosnan is looking to fill his papa’s really hot shoes.

Dylan was recently signed on to model for luxury brand, Saint Laurent, and the shots from his first campaign ever aren’t too shabby. In fact, he’s looking a little bit like a young Ashton Kutcher.

Here’s a little of what we know about Dylan so far:

1. He’s not using his dad’s name to get ahead

Though nepotism is huge in Hollywood, Dylan was discovered by someone who had no idea who he was, according to style.com. In fact, Dylan was found in the manner that every struggling actor/model dreams of: He was plucked from obscurity off the street by Saint Laurent creative director, Hedi Slimane. Well, he found him on a beach in Malibu, but close enough.

In addition to his newfound affinity for modeling, he also performs in a band. Pierce posted a photo of Dylan singing and strumming his guitar on Thursday. “Dylan T Brosnan performing this weekend in Malibu photo by @bensonlyndie,” he wrote in the caption. 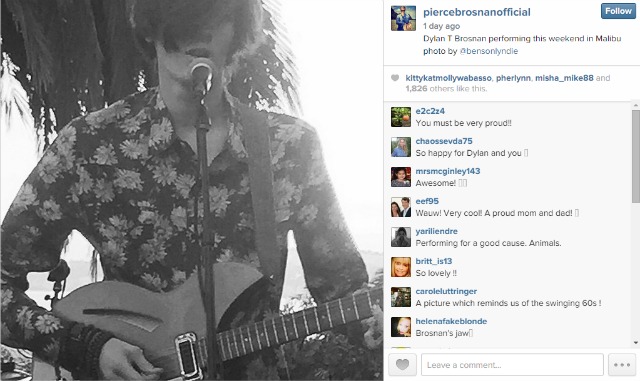 3. He’s got some famous friends

Dylan may not be working the Brosnan name to get ahead in his career, but he certainly is using it to hang out with some other cool Hollywood kids. He is pals with Jack Kilmer, son of another Tinseltown heavyweight, Val Kilmer. Jack is also appearing alongside Dylan in the Saint Laurent campaign.

4. His mom is in show business, too

Dylan’s mother is Keely Shaye Smith. She has been married to Pierce for over 13 years and, although she appeared on shows like Unsolved Mysteries and General Hospital in the ’80s, Smith now works as a journalist, according to IMDb.