Ursula, the villain from the timeless classic The Little Mermaid, took to her own publication, Water, and one-upped Kim Kardashian with a nude photo of her own.

“Break the Ocean Ursula,” is what the caption reads under the giant purple squid image as she smiles for the camera. Ursula perfectly mimics Kardashian by holding up her tentacles just under her super-large bottom, which is in fact about twice as ample as the reality star’s own. The background is painted in all purple, made to match Kardashian’s own rose-colored backdrop in her photo shoot.

How much was Kim Kardashian’s #BreaktheInternet butt Photoshopped? 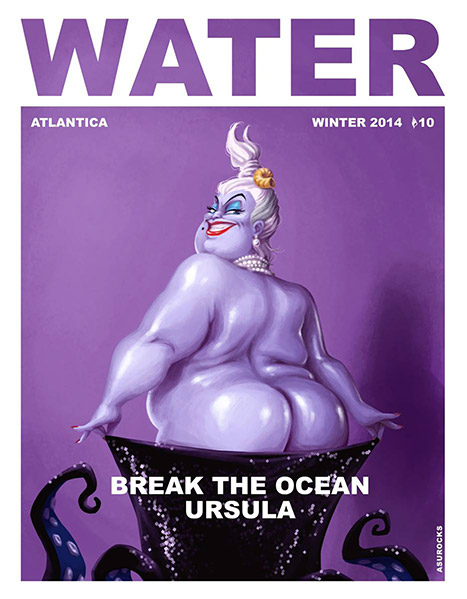 Destined to ruin your and/or your kids’ memories of the famed classic mermaid tale, artist Olga Andriyenko at least spared Water magazine readers the horror of seeing Ursula head-on naked. That could prove to actually break everyone’s eyes, as who knows what lies beneath those curling tentacles of hers.

At least we can be thankful that for The Little Mermaid‘s 25th anniversary, Andriyenko opted to display Ursula’s and not Ariel’s behind, as that would have definitely destroyed our lovable character forever. Whew!

We do think, however, that Ursula definitely does Kim K justice with her pic, and she’s legitimately fair competition for the internet photo-obsessed diva.

This, of course, was not the only #breaktheinternet spoof done of Kardashian’s infamous ass photo. Other famous folks, such as Ellen DeGeneres and wife Portia de Rossi, opted for a hilarious imitation photo of their own, using images of their heads imposed on Kardashian’s behind. And, they may use it as their Christmas card, of all things. Next, not surprisingly, was Chelsea Handler, who actually posted a photo on Instagram of her own bottom.

But, I have to say that the favorite spoof of all goes to Ursula, she really nailed it, hands tentacles down.