t But consider the source. National surveys regularly show that Americans have very little confidence in the ethics and integrity of their political leaders. Yet, somehow we seem to expect more from Kim Kardashian, a woman who found her fame, and came into our collective unconscious, through a sex tape. Let that sink in. She gained fame because America watched her having sex on camera, which she then parlayed into a very, very, lucrative career. We were the ones who got f**ked, not her.

t Frankly, between the sex tape, the nude photos in W Magazine and the current ones in Paper Magazine, we have seen more of Kim Kardashian than her gynecologist. 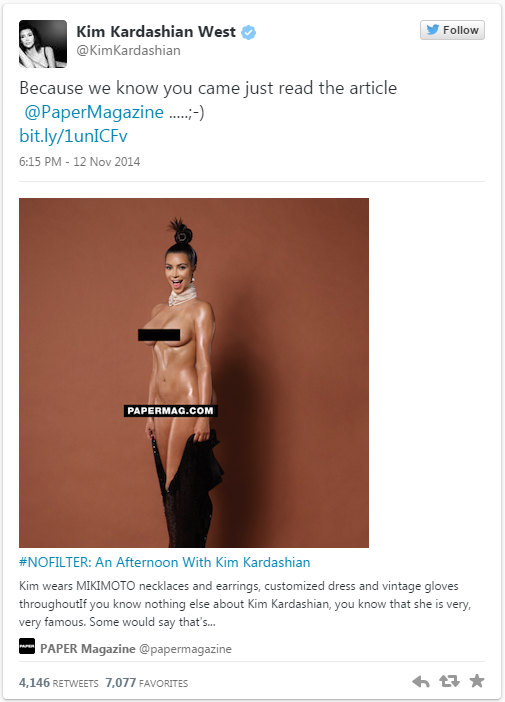 tOne could argue that this the same as women taking back the word “vagina” in comedy, or any marginalized group embracing words and images of hate in order to desensitize the detractor thus disarming them. If you look at enough penises over and over, doesn’t it then become less sexualized? Or better yet, if you look at the same penis over and over, doesn’t that one become less and less exciting? Slacking sexual activity in long-term marriages would suggest so.

t The bigger issue for Kim as a mom is the message she is sending as a role model to her young daughter, to her fans and to the culture, historically. I’m not talking about nudity; if you remember, I’m the “who cares” girl. I’m talking about something more disturbing than pornography and that is her unrelenting, ceaseless, desire for fame at all costs. That’s a crap message to send, because unlike pornography, science has found a connection between desire for fame and narcissism. Yes, she did it successfully, and despite my better judgment I have to say, I like that she embraces her sexuality. I admire women who have a level of comfort with their bodies that make others uncomfortable.

t My only concern about her as a mother is that she is a narcissist creating other narcissists. It’s no secret that her goal was always “fame.” Not to be an actress or a singer, just “to be famous,” confirmed by a recently released video of a 13-year-old Kim. People who like to use the old trope, “she’s famous for being famous” or “she’s famous for nothing” are really missing the point. We created her and some would say, we have created a monster.

t In 2010 that monster had us by the wallet. Sure she was appalled by nudity, then she was desperately trying to step away from her sex tape beginnings and brand herself as a legitimate celebrity. That was the year her career took off internationally when she began aligning herself with brands like Carl’s Jr. and Bebe, making movies and even music. 2010 is also the year that Madame Tussauds unveiled her wax figure. She was famous with a capital “F” and we were spending millions to support her goals.

t During this most recent Paper Magazine controversy, Glee actress Naya Rivera blasted Kim reminding her, “You’re someone’s mother.” A valid point but again, the nudity isn’t the problem, it’s the relentless desire to be famous that has the larger damaging result. Some may call Kim a bad mother, some may say she’s immoral and even shameless… just make sure you also add that she is a hypocrite too. Remember that episode of Kourtney and Kim Take New York I told you about earlier? In it Kim concluded, “I’m never getting naked again… I don’t want people to be, like, all she’s good for is being naked.”