Sorry, television fans. NBC is about to jump the shark with its next live television production, and there may be nothing we can do about it.

As a playwright, I’m the first to applaud theatre-television crossover events. NBC’s live production of The Sound of Music starring Carrie Underwood was by no means perfect, but I loved how enthusiastic the company was about bringing a live theatrical event to viewers. With 22 million viewers tuning in to watch, the event was a huge success for NBC as well as a boon to theatres across the country who (let’s be honest here) can always use a boost.

It’s no surprise, then, that NBC immediately set to recreate the ratings magic with Peter Pan Live!, slated to air Thursday, Dec. 4. The upcoming event stars the ever-impressive (and multitalented) Christopher Walken as Captain Hook with Girls‘ Allison Williams playing Peter Pan. Between those tuning in with genuine enthusiasm for the musical and those tuning in just to hate-watch (not everyone loves the idea of a celebrity tackling iconic theatre roles. Just look at how some people railed against Underwood’s performance), odds are good that NBC will land another ratings bonanza.

Is that you, Christopher Walken? Here’s his first pic from Peter Pan Live!

So why oh why is NBC planning to deviate from the formula by producing a live broadcast of Aaron Sorkin’s stage play of A Few Good Men?

Yes, you read that correctly… A Few Good Men.

The 1992 film adaptation has grossed over $140 million domestically, was nominated for a busload of awards and has become a staple repeat on cable television, but who wants to watch the live stage version in 2014? Our guess? Nobody. And here’s why:

I’m sorry, but no one wants to see anyone besides Tom Cruise and Jack Nicholson square off together in what is probably the most quoted courtroom scene of all time. “You can’t handle the truth!” coming from anyone but Jack Nicholson’s mouth is just plain wrong. Yes, the phrase has been parodied and quoted to death, and yes, I understand that Jack Nicholson doesn’t “own” the role in the truest sense, but for millions of television viewers who have already seen the film, he does.

It’s not a musical

Let’s be honest: American audiences love to watch people sing and dance on TV. Television shows like American Idol, The Voice and Dancing With the Stars are all hugely popular, and putting a handful of celebrities on a sound stage with promises that we’re going to see them sing and dance is completely in line with our zest for spectacle. Add in the factor that they’re doing it live, and we get even more excited, anticipating those inevitable flubs. 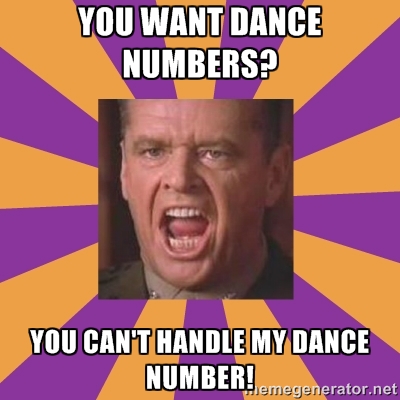 But A Few Good Men is not a musical, there aren’t any big dance numbers, and the costumes are super boring. If television audiences want to watch a courtroom drama, they’ve already got a ton to choose from including Law and Order, The Good Wife, Boston Legal, and of course JAG.

If NBC is hoping to ride the wave of the (presumed) success of Peter Pan Live! into Sorkin Land, they’re going to be sorely upset. The Sound of Music and Peter Pan are both family-friendly fare. A Few Good Men will bore the socks off young children, if they’re even allowed to watch it. The play’s subject matter and use of coarse language is probably too dark for many parents to feel comfortable letting their kids watch it at all.

Plays on TV are boring

I’m probably going to catch some flak for saying this, but stage plays on television are boring. That’s why they get adapted into teleplays or screenplays. It’s why Sorkin’s stage play, A Few Good Men, was turned into a movie. When you walk into a theatre, you embrace the suspension of disbelief that is required to experience the transformation of live theatre. You can see the curtain, the lights, the strings… but you tell yourself it’s OK because it’s theatre. But when you sit down to watch something on TV (or on film), you want things to look really, really real. The musical form can distract us from the artificiality of staging something on film, but a straight character drama “live” is just… meh.

NBC and Sorkin are still in the planning stages for this live broadcast, but you can bet we’ll be keeping our side-eyes on the negotiations.