Palmer was a controversial figure before she raised an unprecedented $1.2 million via Kickstarter to support the production of her music and her band’s tour costs. Despite this massive windfall of cash, Palmer has taken heat for asking opening bands to play for free. The Guardian went so far as to call her a “deluded egoist.”

In 2013, England’s Daily Mail wrote an entire article about how Palmer’s breast escaped her bra at the Glastonbury fest with no mention of the music itself. She responded with a highly viewed and hilarious spur-of-the-moment tune, “Dear Daily Mail,” in which Palmer performs without a stitch of clothing. (Thank you.)

Chelsea Handler cries sexism after her nipples are banned by Instagram

Despite the media behaving like sharks circling fresh chum, Palmer has an international fan base that supports her, loves her and worships her like the X-rated Virgin Mary. “Devoted” is an understatement, evidenced by her insane Twitter following (over 1 million) and her aforementioned Kickstarter campaign. 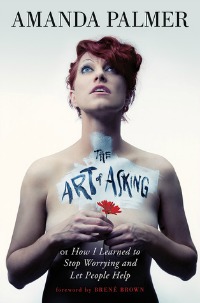 Her most recent addition to the creative world? No, she did not run through the Vatican in pasties. She wrote a memoir, titled The Art of Asking or How I Learned to Stop Worrying and Let People Help, based on her TED talk of the same name.

The book traces Palmer’s path from misunderstood teen (who loved Judy Blume) to the 8-Foot Bride, a human statue routine she performed in Boston after college. She even chronicles the evolution of her eyebrows. During our interview with her, she solved the mystery.

In college, following what she called a “nervous breakdown,” she shaved all her body hair (except her pubes) in “some bid over control of my fate.” She drew in her eyebrows, artfully, each day and received unexpected compliments. Now, she shaves her brows and draws them in every morning with liquid liner, sometimes twice a day.

After Palmer’s statue bride time came the Dresden Dolls, solo tours and albums with the Grand Theft Orchestra. Not to mention her marriage to cult literary icon Neil Gaiman (15 years her elder).

Gaiman features less as a lead character in Palmer’s memoir and more as a charismatic costar. (One of his best lines: “I’ll leave this café. But I won’t leave you. I’m not going anywhere.”) And apparently the sex is pretty phenomenal. Gaiman line-edited Palmer’s manuscript, cutting 50,000 words, including, Palmer said, “some bits about our marriage that weren’t particularly flattering.”

On knowing the faults in your relationships

They’ve learned a lot from each other over the years. She said Neil has learned to be braver, and she has learned to be more compassionate. However, no marriage is all wine and roses. “The hardest part of our relationship is that we’re very similar,” Palmer said. “We’re really selfish in similar ways. We’re generous in similar ways. But sometimes the resonance of our flaws absolutely f***ing spanks us.”

Female singers add their voices to the Miley/Sinead feud

Palmer did the cover of The Art of Asking, unsurprisingly, nude. I asked her about her affection for bare skin and learned the cover was initially planned to be a more social occasion. She said, “The original idea of the book cover was having a bunch of people painting the title on me. We ended up deciding on just having me instead of me… and eight drunk artists.”

On being naked, as a woman

Does Palmer think there is power in the naked female form? Not exactly. However, she did say, “Here and now in this culture, especially for the female, being naked in a situation that’s not explicitly sexual just makes you very vulnerable. I am very fascinated by the ability to push my own boundaries of feeling vulnerable.”

She went on to quote Lena Dunham. “She talks about being naked on Girls all the time. She says that she doesn’t consider it brave to do something that you’re not afraid of. I feel the same way about being naked.” (Again, thank you.)

On not taking things so personally

Palmer doesn’t seem to be very scared of anything, including her critics. When I asked her about some of her more negative reviews, she said criticism is “part of the practice of being a human and a female performer because you are the object of scrutiny and ridicule no matter who you are. Don’t take it personally.”

She’s even been known to post negative comments on her blog. She said, “It’s therapeutic to wave your hate mail in the air.”

Are naked pop stars empowering or degrading to women?

On asking for help

To quote The Art of Asking: “From what I’ve seen, it isn’t so much the act of asking that paralyzes us — it’s what lies beneath: the fear of being vulnerable, the fear of rejection, the fear of looking needy or weak… To ask for help amounts to an admission of failure.”

Palmer has made this admission into a myth, as she not only asked her fans to help with her Kickstarter campaign, but she rarely stays in hotels while on tour. Instead, she uses Twitter to find suitable locales to couch-surf. She has made countless friendships this way. She wants people to understand: “Asking is not just an act. It’s a relationship.”

Amanda Palmer has been called a lot of things: egoist, innovator, shit-starter and yes, artist. In the end, that is how she sees herself. But being an artist isn’t just about creating. Art bridges gaps in ways thoughts, words and physical touch cannot. According to Palmer, “I feel like my calling is going out into the world, experiencing things, sharing how I feel about those things, making other people feel things and hopefully, somehow make the world a better place. I’m digging it.”