Sorry, ladies! It looks like Ed Sheeran is officially off the market.

Ed Sheeran is sorry he called Miley a stripper

OK, not really. But he has definitely proved himself to be one of the sweetest stars out there by accepting an engagement ring from a fan with brain cancer.

According to MTV News, the “All About It” singer said “I do” in Glasgow last Thursday after meeting 19-year-old Katie Papworth, who is fighting an aggressive form of brain cancer. iHeartRadio reports Katie has been fighting the disease for eight years, and that she’s one of Ed Sheeran’s biggest fans.

Katie met Sheeran backstage, where she presented him with an engagement ring engraved with an infinity symbol. And Sheeran graciously accepted before posing for photos and signing autographs for the young fan.

The meeting (and the proposal) was part of an arrangement by the Les Hoey MBE DreamMaker Foundation, an organization similar to Make A Wish in the United States. The foundation posted photos of the meeting on its Facebook page, including one of Sheeran holding the engagement ring next to Katie.

Back off, haters: Ed Sheeran says there’s no shame in pop

“Huge Thanks to Ed Sheeran (a real Superstar )and his fantastic team who made Katies Dream come True Last night,” the Foundation wrote on the photo shared on its Facebook page. “[S]he even proposed and he kept her ring. xx” 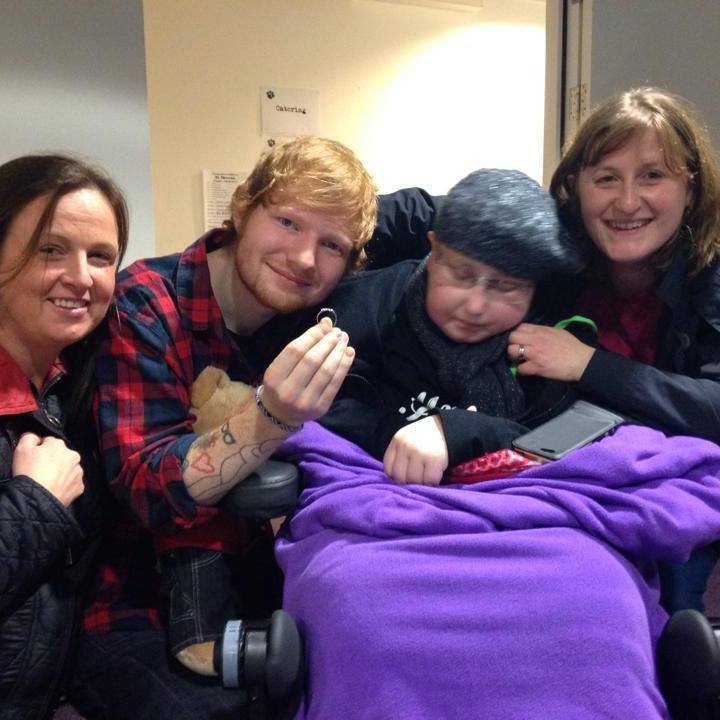 And, according to MTV News, Katie even got a special keepsake from the meeting with her favorite star: Sheeran signed a picture that she drew of him before her illness made her lose her sight.

“Katie, lovely to finally meet my wife,” he wrote on the drawing.

Ed Sheeran isn’t the first star to step up to make an ailing fan’s day, but the way he did it is undeniably one of the sweetest we’ve seen.

What’s your favorite story of a celeb doing something awesome for a fan? If you have something that beats Ed Sheeran’s, we’d love to hear it — tell us in the comments.