Katy Perry might just have won best Halloween costume of all time after the singer stepped out in a super-cheesy and orange getup.

Look out — is that Superman, a street cone, an orange plane? No, it’s Katy Perry dressed as a giant Crunchy Flamin’ Hot Cheeto! Yes, the “Firework” singer opted to forgo the sexy costume craze most celebs go for, and instead went for an unflattering but hilarious flaming orange look.

The hysterical getup consisted of an orange Lycra bodysuit covered by a big lumpy and fluffy orange outfit that covered her torso and head. She also sported matching orange lace-up shoes, orange nail polish, orange lipstick, and carried a bag of Cheetos to complete the ensemble. To add more humor to the very original and imaginative costume, Perry attached handles to the Cheetos bag so she could carry it like a purse. 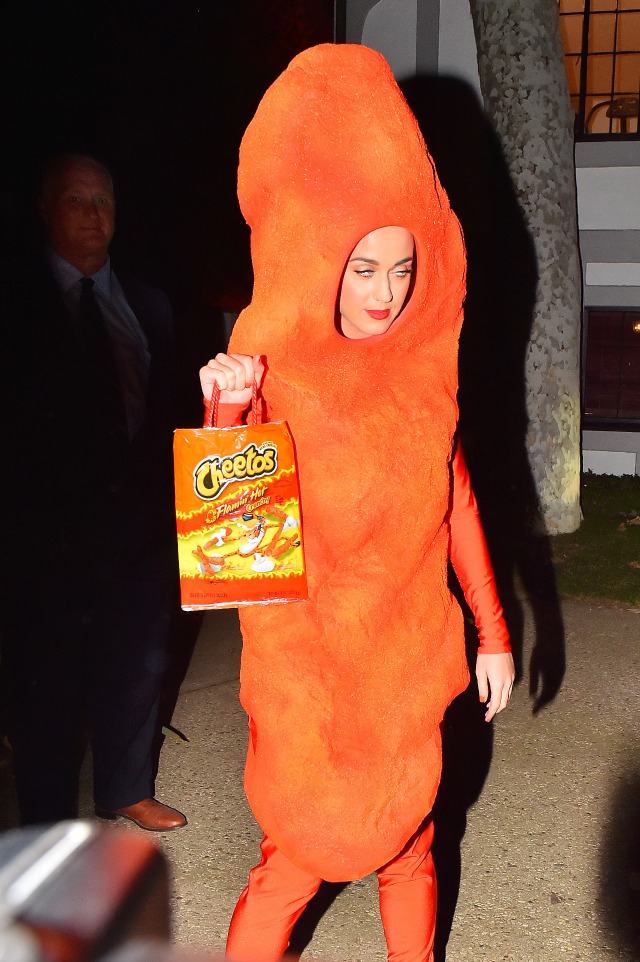 Perry has said in the past that Cheetos are one of her favorite snacks of all time. She also admitted to bingeing on the crunchy yummies as she nursed herself through her infamous divorce with ex Russell Brand.

“There were two weeks of my life after I found out the truth of my marriage where I was like, ‘OK. All right. I can’t feel this. This is too intense right now,'” Perry told Marie Claire in an interview. “I was like, ‘I’m just eating Flamin’ Hot Cheetos and drinking, and that’s it.'”

Fortunately, Perry was able to move on from her painful breakup and is now back to her happy self. Luckily, though, she can still enjoy eating Cheetos, even after she used them as an escape from harder times. Apparently, she loves them enough to actually become one with a Cheeto, even if it’s just for one day.