As an actress, producer, platinum recording artist, author and style icon, 18-year-old Zendaya maintains a dizzying résumé. But this year, the bighearted teen is making time for another important title: Trick-or-Treat for UNICEF’s spokesperson.

For the past 64 years, children have gone door to door every Halloween with traditional orange boxes to collect coins for UNICEF.

On being a “superhero” this Halloween

This year, in her capacity as spokesperson, Zendaya is encouraging kids in the U.S. to make a difference in the lives of other kids by taking part in this special annual program — one that left a lasting impression on the star at an early age.

“I loved Trick-or-Treating for UNICEF when I was younger because it was such an empowering experience to be able to make a difference,” she said. “Kids need more than candy; they need basics like medicine, nutrition and clean drinking water, and millions of them wouldn’t have these things without UNICEF.”

For Zendaya, who considers her role as a Trick-or-Treat “superhero” an honor, one of the facets of the program that impresses her the most is how easy UNICEF makes it for kids to truly make an impact in the lives of those who are less fortunate.

“There’s no such thing as a small donation,” she told us. “It’s amazing how much such a little amount of money can do for people’s health and for basic necessities in general that aren’t available to everyone.” 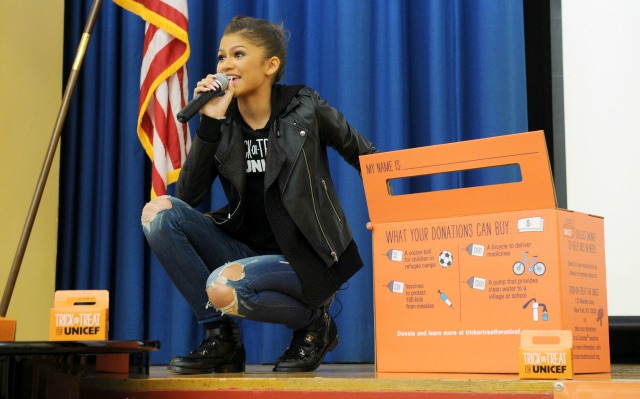 And she’s certainly right about that. For example, with only $2.86, UNICEF can provide 10 children with a measles vaccine — protection against an illness that kills hundreds of children every day. With just $1, it can supply a child with more than a month of clean drinking water.

On the newest evolution of the campaign

One of the longest-running youth volunteer initiatives nationwide, Trick-or-Treat for UNICEF has raised more than $172 million to support UNICEF’s life-saving work globally.

Originally a grassroots campaign, it started in 1950 with boys and girls going door to door with hand-painted milk cartons to collect coins to aid children affected by World War II. Now a national campaign powered by teachers, kids and their parents, Trick-or-Treating for UNICEF evolved in another especially relevant way this year.

In addition to going door to door, kids can now support the campaign virtually — a development Zendaya calls “a really cool feature.”

INTERVIEW: Zendaya on disgusting Zapped prank, Madonna and how she feels about… Canadians?

With a few clicks of their mouse cursors, kids (and their parents) can create Crowdrise fundraising pages to encourage others to contribute, too. They can even use these “donation pages” to turn their Halloween party into a charitable (and, for parents, teachable) moment.

On the importance of educators

This year, kindergarten through eighth-grade teachers can also get involved through the second annual Trick-or-Treat for UNICEF School Challenge.

The competition, which will provide 15 grand-prize winning teachers with $1,000 technology grants, rewards teachers who share the ways they teach their students about global issues affecting children and about the importance of getting involved and giving back.

For Zendaya, it’s a component of the campaign that particularly resonates with her.

When asked if she ever had a mentor or educator who influenced her to do good in the world, the star didn’t hesitate, asserting, “I would say that would be my mother, because she was a fifth-grade and middle school teacher, so I kind of grew up in a classroom.”

Her father also influenced her in this capacity as he was a P.E. teacher.

“Teaching is one of the most important and yet underrated and underpaid jobs out there,” she said. “I saw my mom struggle just to get simple things like a field trip or arts education in her classroom. It definitely makes you aware, and it instills those kind of values in you at a young age.”

On why this all matters to Millennials

It’s exactly those values that keep the Oakland, California-born beauty grounded and motivate her to team up with charitable foundations like UNICEF — and why she believes it’s so important for all young people to step up and make a difference.

“We are the next generation that is going to end up running the world,” she said. “We’re the next business owners, the future president… so I think it’s important that we have causes and things that we are passionate about. We want the world to be a better place,” she said.

Zendaya says she already sees a change in herself due to her work as the Trick-or-Treat for UNICEF spokesperson.

“I think a lot of people don’t understand what’s going on in the world. We’re kind of confined to our own little bubble, and we don’t know what’s going on here half the time,” she admitted.

“I think this whole experience has really opened my eyes. I think for me it’s really put things in perspective, and you just kind of have a different take on everything.” 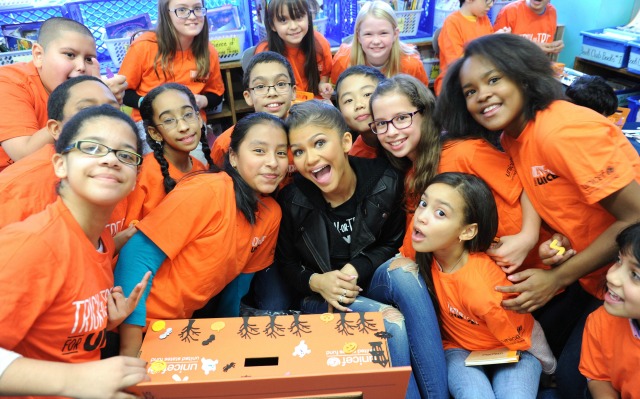 To order boxes, fundraising materials or set up a Crowdrise page, visit www.trickortreatforunicef.org.