Marriage is the most intense, personal relationship you’ll ever have, and even though the movies would have us believe everything will be just perfect once we wear the white dress… that’s not quite the reality.

Too often, love in a marriage gets buried beneath bills, house cleaning, kids and our own selfish inclinations. In the United States, 41 percent of marriages end in divorce. (That’s one divorce every 36 seconds.) Scary, right? So why do we do it? Why do we get married in the first place? When you’re busy folding your husband’s laundry when you’d rather be out on the town, this can be a nagging question. 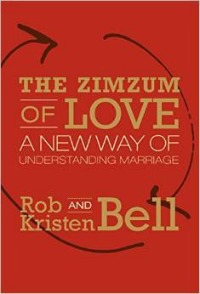 Christian couple Rob and Kristen Bell have had their share of marriage difficulties. They’ve been through the dreaded dry spells, and they’ve often forgotten what it’s like to simply be in love. Well, remember that feeling you got when you first met your man? The butterflies, the excitement, the almost obsession: You can get all of that back, according to a new book titled, The Zimzum of Love.

5 Things you should never say to your spouse

OK, so what the heck is a zimzum? It’s a Hebrew word used to describe creation. Follow me on this: Before there was anything, there was God. To make the world, God had to create space that wasn’t God’s. To make this space, God withdrew from a certain space to make something new. “Zimzum” is the word used for this withdrawal or contraction.

The same idea applies when you meet the person you want to spend the rest of your life with. Forever, it’s just been you. Now, you have to make room in your life for someone else, and that can be daunting. Maybe you don’t want to give up your weird habits of eating ice cream by the pint and watching British television every night. Maybe you don’t want to share the space, but you’re willing to, because you’re in love and then, you’re married.

Of course, you’re not the only one making space; your spouse must make space, as well, and this give-and-take is the foundation of zimzum.

Sure, there will be those days when you look at your husband and think, “What kind of crazy person did I marry?” There will be days when your marriage brings pain instead of joy. But you take the bad with the good. You zimzum.

In their new book, Rob and Kristen share all sorts of amusing and heartwarming personal anecdotes about their own challenges in zimzum territory. Like the time when Kristen put the kibosh on a favorite clothing item of Rob’s or the spellbinding experience of realizing, suddenly, that Rob was the man Kristen wanted to spend her life with, no matter the cost.

They also share the four definitions of the space between two couples as being responsive, dynamic, exclusive and sacred. Although Rob is a widely known Christian teacher and speaker (and one of Time magazine’s 100 Most Influential People of 2011), this book is written for every denomination. It’s not clinical; it’s not a how-to. The Zimzum of Love is really about connection.

For me, the book was a reminder of things so easily overlooked in day-to-day married life. First, we need to remember to take care of ourselves as women because we can’t very well take care of our marriages if we’re complete emotional wrecks. Secondly, marriage involves sacrifice, and oh, don’t we hate that word? Thirdly, never stop talking. Never stop communicating. So many problems, at their root, are due to our own fear of confrontation. If you’re upset, say it.

When you get married, you are no longer just you. You are now a wife; your sexy man is now a husband. How easily we forget about love in the midst of work, chores and daily life. The Zimzum of Love is a nice reminder of what it means to truly love someone and to be willing to give your life for that person.

If your marriage needs some gentle prodding (or even a kick in the pants), learn to zimzum. Share your space, and your heart will follow.