But it wasn’t the actress’s chic black frock or even the super-sweet displays of affection between Zellweger and musician boyfriend Doyle Bramhall II that caught everyone’s attention.

14 Actresses who have dramatically transformed for roles

Rather, it was Zellweger’s face, which sites like MoviePilot.com are calling “virtually unrecognizable.”

And while we concede that Zellweger does look markedly different from the Zellweger we remember from films like Jerry Maguire and Bridget Jones’s Diary, we’re not convinced — like other sites are — that the actress has gone under the knife for cosmetic tweaking. 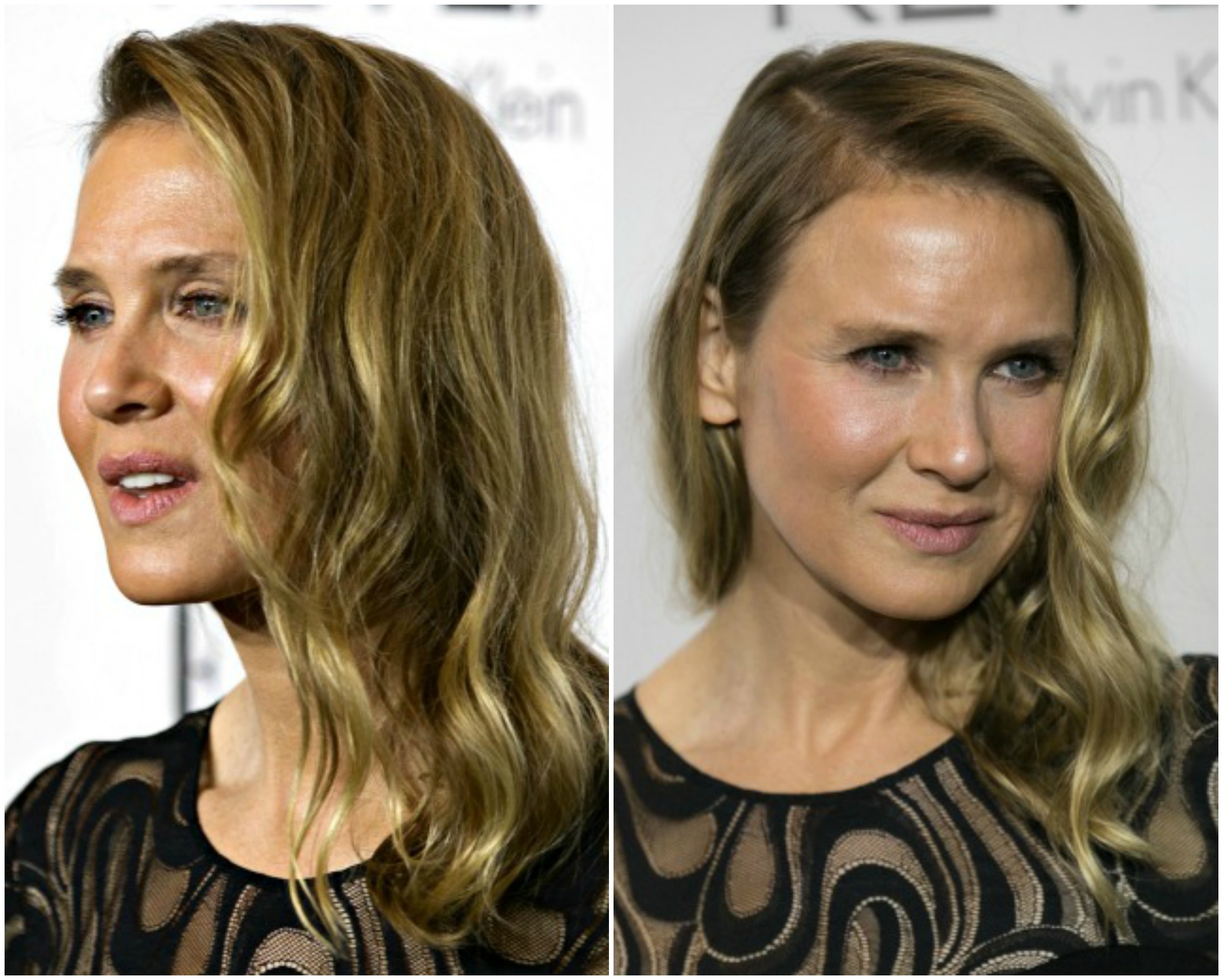 Here are a few possible explanations for Zellweger’s new look.

“The change in her face shape may be due to weight loss, although there may be some fillers or fat placed in her upper cheeks to define her cheekbones and help elongate her face,” says SheKnows Expert Dr. Matthew Schulman, a top New York City board-certified plastic, reconstructive and cosmetic surgeon.

Zellweger’s career has been punctuated by highly publicized periods of yo-yo dieting. After all, who can forget the roller coaster of calories she consumed during her Bridget Jones years? The actress packed on 30 pounds each time she tackled the role.

Bradley Cooper’s weight gain: He can do it, but women can’t?

This kind of drastic up-and-down weight loss — or weight cycling — puts stress on the skin’s elasticity, which can cause a noticeable and sometimes dramatic difference in appearance over time.

OK, so we aren’t ruling out that Zellweger may have gotten a minor face lift, upper eye lift or some form of cosmetic lift. It’s a possibility. People who fall in this camp (of believing Zellweger went under the knife) point to the actress’ taut skin and noticeably fuller face as proof.

“Her eyes appear to be the result of surgery,” says Dr. Schulman. “She no longer has the upper eyelid hooding that we have associated with her since her early Hollywood days. The upper eyelid skin was likely removed during surgery, giving her eyes a more rounded and open appearance. She may have had some excess skin removed from her lower eyelids as well. Her chin and lower jawline appear slightly different as well, so placement of a chin implant is also a possible explanation.”

But here’s the thing. If you have those kinds of plastic surgery procedures, isn’t the point to get rid of pesky wrinkles, lines and imperfections for good? Zellweger’s skin isn’t entirely smooth — she has plenty of fine lines around her eyes that illustrate that point. And, although some say her forehead is line-free, we can’t be alone in noticing the small creases.

It looks like Renée Zellweger has herself a new man

Could Zellweger just look so different because, well, she is different? She turned 45 in April. She’s getting older. Is it possible we’re so unfamiliar with what aging gracefully in Hollywood looks like that we don’t recognize it?

“Aging can certainly change the appearance of her face, but aging makes you look older — not younger,” says Dr. Schulman. “As you age, the upper eyelid droops more and the hooding of the upper eyelids increases. The changes we are seeing in her recent photos is the opposite of what I would expect with aging.”

Zellweger’s face may not be entirely imperfection-free, but it is still quite a bit smoother than the faces of many “regular” 45-year-old women. So maybe she couldn’t commit to plastic surgery but decided to have Samantha from Sex and the City‘s favorite afternoon indulgence of a little “mani-pedi-Botox.” Because her jaws and cheeks appear softer and fuller, it’s possible Zellweger experimented with injections of Botox or other fillers.

Although Zellweger doesn’t necessarily have a reputation for being a hard partier, she has enjoyed a string of relationships with men who do — namely musicians like Kenny Chesney, Jack White and current beau Bramhall. Oh, and let’s not forget Bradley Cooper. Could years of partying alongside her wild guys have finally caught up with her face? Since alcohol is a hepatotoxin (it damages the liver), it causes skin to take on a sallow, pasty appearance.

Between that and the fact that alcohol dehydrates the skin, it makes pores look huge. Cigarettes, which deprive the skin of oxygen and nutrients, are also categorically bad for anyone who hopes to stay fresh-faced. Does Zellweger smoke? We can’t be sure, but it would explain some of her skin’s pebbly texture.

“It is true that alcohol, a heavy workload and too little sleep may contribute to why people look ‘older,'” says Dr. Schulman. “She claims to have a ‘healthy’ lifestyle now, and this may be part of the reason why she looks younger, but again, these changes seem to be the result of surgical correction and not lifestyle modification.” 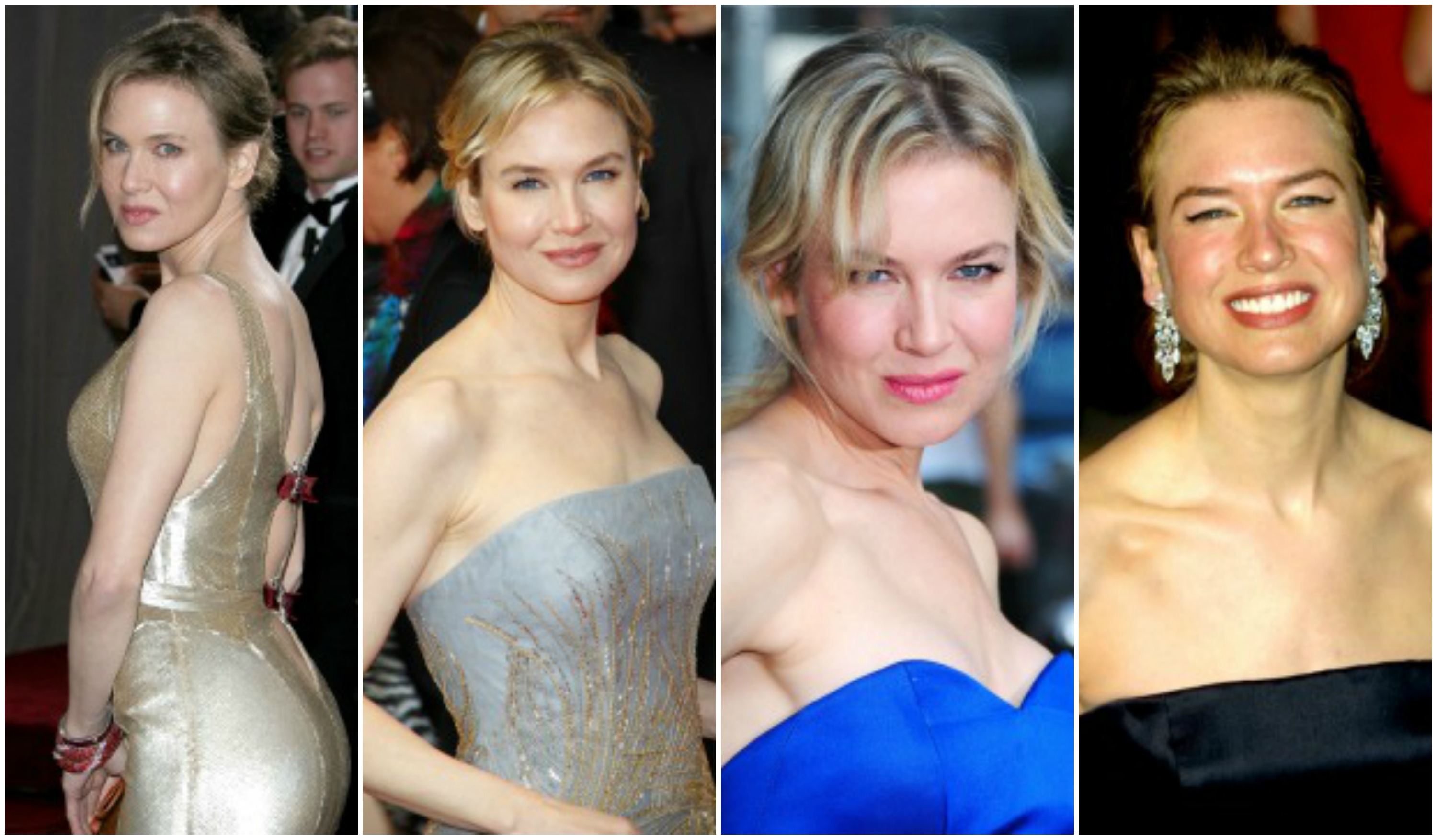 What do you think? Has Zellweger lost her classic Zellweger look? Do you think her new appearance is courtesy of plastic surgery or simply a matter of aging?