Foxcatcher is based on the true but weird story of an Olympic wrestler whose life gets hijacked by an eccentric and lonely rich dude. While we enjoyed the promise of the quirky premise and the great performances, the movie didn’t quite live up to all the hype. Here’s why.

Steve Carell plays John Eleuthère du Pont, yes from the wealthy East Coast du Pont family who earned their fortune manufacturing and selling gun powder during America’s early wars. In the 1980s, du Pont developed a fascination for the sport of wrestling and decided to “adopt” the United States Olympic Wrestling Team, despite not having any expertise in the sport. 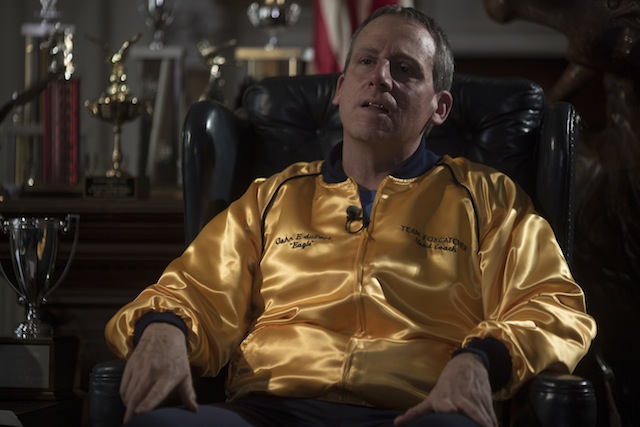 Here’s a list of what we think the filmmakers did right.

1) The sheer madness of Foxcatcher Farm

John du Pont lived on a sprawling East Coast estate with his cold, horse-obsessed mother, Jean (Vanessa Redgrave). When he brought the U.S. wrestling team to live and train with him, they took the name Team Foxcatcher. Wrestler Mark Schultz (Channing Tatum) evolves into du Pont’s glorified pool boy, the two traveling by private jet together, snorting coke and doing all the other strange things people with too much money on their hands do.

Known for comedy, Carell is just starting to explore his dramatic side in films. To accurately play the idiosyncratic John du Pont, he not only wore a prosthetic nose, but also watched hundreds of hours of du Pont’s real coaching videos. “I listened to [du Pont’s] cadence. Not only how he spoke physically, but the actual words he chose to express himself,” Carell said. We think it paid off.

Early in the film, brothers Dave (Mark Ruffalo) and Mark Schultz practice wrestling moves, alone in their gym. The scene has a dancelike quality to it with Dave gently correcting his little brother Mark when he makes a mistake. “There’s a real tenderness between them and so much unspoken communication. It’s as intimate as two men can be without being lovers,” Ruffalo said. Quickly, however, Mark’s envy of his brother takes over, and he inflicts some non-brotherly violence on Dave, reflecting the overall arc of the movie. 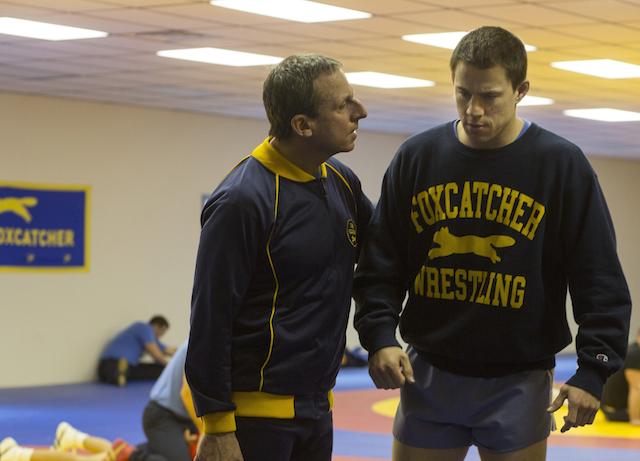 Here are some of the things we think the filmmakers got wrong.

While Redgrave is fabulous in the few scenes she has, there simply aren’t enough of them, and the ice queen mother’s absence leaves a hole in the story. So much of John du Pont’s arrested development was as a result of his relationship with his mother, but we get to see very little of that in the movie. If she’s truly the evil witch, we want to see more. Instead, we are left to guess at the details of their dynamics beyond the fact that Jean loved her horses more than her son.

We think the intention of the director Bennett Miller was probably to create a slow burn in this film, possibly in hopes of replicating the style of many movies made in the 1970s like Badlands or Taxi Driver. But the movie is way too meditative for a sports film that promises rough physicality. OK, so it’s not a traditional sports film, but neither was The Wrestler with Mickey Rourke, but its pacing was incredibly dynamic. At two hours and 14 minutes, Foxcatcher could seriously stand to lose a good 30 minutes.

We love Ruffalo, particularly in films like The Kids Are All Right. But we didn’t quite buy him as the famed gold-medal winning Dave Schultz — and neither did the current U.S. wrestling team, many of whom were hired as extras on the film. In fact, several real wrestlers approached Ruffalo and told him so. To persuade the real wrestlers to get on board with Ruffalo, the director had the actor suit up and wrestle with them. “This was actually an audition for me to win them over — I knew I couldn’t blow it,” said Ruffalo, who did finally impress them with his moves. We just think Bradley Cooper, Gerard Butler or Joe Manganiello would have been more believable choices.

When du Pont befriends Mark, it’s clear du Pont is an incredibly lonely man, struggling to give meaning to his own life. Because of his difficult childhood, young Mark is in need of a father figure. But du Pont almost seems to be obsessed with Mark, making us wonder if he was sexually attracted to the wrestler. We’re not saying we need to know if du Pont was explicitly gay or straight or somewhere in the middle. We just wish we had a bigger window into his motivations and desires.

5) Lack of creative license with the story

All really compelling biopics, like A Beautiful Mind or Amadeus, take a specific point of view about their subject and make assumptions about the inner workings of that person’s mind. Oftentimes, however, filmmakers are too afraid to invent any information, leaving the story, as a whole, unsatisfying.