We love him as Shane Walsh on TV’s The Walking Dead, but it wasn’t until we saw him in the box office-leading film Fury that we realized how truly talented this man is.

Jon Bernthal is sexy in that rough and rugged, tough-guy kind of way. He’s gritty and salty, but despite his hard exterior, it seems like he’s possibly got a soft spot somewhere underneath all that grime.

In Fury, Bernthal plays the American soldier Grady “Coon-Ass” Travis with shocking fortitude, even if some of his intensions are morally questionable. The movie’s writer/director, David Ayer, had this to say about about Grady Travis.

“He crawled out of a swamp. He’s the kind of guy who was a Depression-era child, grew up without shoes on his feet, working since the age of eight on farms and he’s just not equipped for the adventure he’s been forced into by circumstances.” 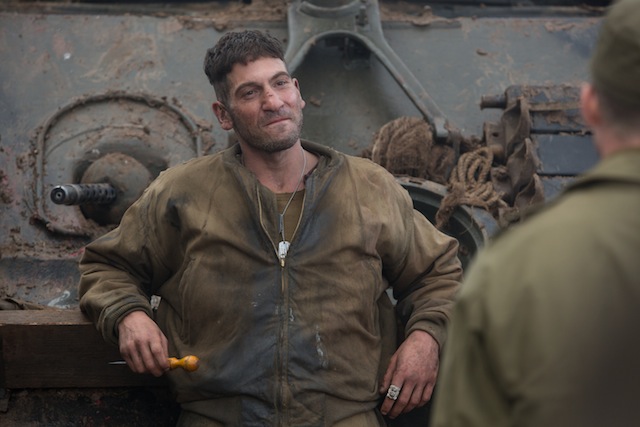 Wardaddy (Brad Pitt) is the leader of this tight-knit group of soldiers and has tons of experience to help his men survive yet one more day of this insidious war. But Wardaddy relies heavily on Grady to have the guts and drive to follow through on his sometime gruesome commands.

A key member of the Fury set asks, “Who the hell is Brad Pitt?”

Boyd “Bible” Swan (Shia LaBeouf) is the gunner inside the tank and serves as the moral compass for the crew. But Boyd and Grady have a surprisingly close relationship in the story since Grady is the loader, which means he’s the one loading ammunition into the tank’s weapons system.

Bernthal said that Grady and Boyd’s dependence goes beyond work. “Grady thinks of Boyd as the ‘mother’ of the group,” said Bernthal. “Grady has unbelievable respect for Boyd as the spiritual and ethical center of the group. With Boyd, he keeps his connection to something higher and to God.

“The loader/gunner relationship is incredibly interesting as they absolutely depend on each other. You’d think there would be a split between them and one guy who’s very much about Christ and preaching and the Bible, and then the other who is all about killing and women. But the two characters absolutely melded as one. We’re just two sides of almost the same person.”

It takes a lot of depth for a man to channel his inner killer and be at peace with that on- and off-screen. But taking risks like this will no doubt earn Bernthal an Oscar nomination, if not for Fury, then for something else very soon.