Damn, at 50 years old, Rob Lowe still looks super good… except for that badly cut and bleeding knee of his!

The Parks and Recreation actor is an avid surfer, and he was enjoying the California waves on Sunday — and looking really good in red swim shorts — when the ocean was not so kind to him. He emerged from the water with a nasty gash to his knee.

Taking to Twitter on Sunday, Lowe shared a snap of himself holding his surfboard, with his right leg covered in blood from the knee downward. Ouch!

And it turns out the cut was pretty serious because it required the attention of some local physicians. Lowe took to Instagram to share a pic of his not-so-wonderful day, captioning it, “My day so far. I will live. #SurfStitches.” 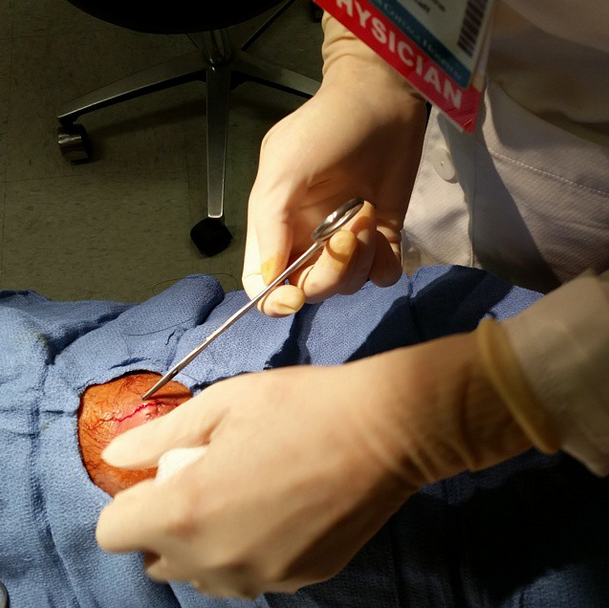 The actor also shared the news of his cut via Twitter, telling fans he was astonished by the amount of blood the human body can produce.

The amount of blood that can unwantedly come out of one's body is amazing.

However, Lowe understands the ocean is a dangerous place, and he has a deep respect for it, as he previously revealed during an interview with The Huffington Post last year.

“I love the ocean, I’m in it all the time — I surf every free day I have, I fish, you know, I’ve always been connected to the water and to the environment,” he told the publication, adding that he’s surfed some of the world’s most exotic surfing spots.

“I’ve surfed in Nicaragua, Panama, Indonesia, the north shore of Hawaii, in Mexico, so I think I’m probably going to go with some pretty remote islands in Indonesia,” he revealed.

But Lowe is very careful to avoid beaches that are notorious for shark attacks.

“Well, there is a very notorious beach very close to where I surf called Surf Beach, and two people have been killed over the past two years. Um, I don’t go to that beach,” he explained. “I’m aware of it, I’ve seen sharks in the water — I’ve seen a great white while surfing. And it’s part of the ecosystem, you know, it’s their home.”

But you definitely don’t want to be swimming in their home and dripping with blood! Just as Lowe’s earlier caption suggested, it’s #SoSharky.