By now you probably already know Snoop Dogg and Iggy Azalea have beef. What started off with the “Drop It Like It’s Hot” rapper mocking Azalea’s appearance with a derogatory meme (after he spotted a picture of her wearing no makeup) has now turned super-ugly.

So ugly in fact that the “Fancy” hit maker’s boyfriend, Los Angeles Lakers star Nick Young, has decided to shed some light on the situation.

Early on Wednesday morning, Oct. 15, the NBA player took to Twitter to defend his girlfriend, and call out Snoop, by saying no one is concerned with what Snoop Lion aka Snoop Dogg has to say, and he’s just going through a midlife crisis.

In a series of Instagram posts where Snoop has called Azalea some pretty nasty things, including frequently using the word bitch, it appears he was also baiting Young, although not by name.

Iggy Azalea confesses her love for her man Nick Young

However, it looks as though the feud may now be over, at least on Snoop’s part, because he’s just posted a video in which he says, “I just got off the phone with my homeboy TIP, the king of Atlanta, and it’s officially over. No more bad talk, I apologize. I apologize and I won’t do it again.”

He also posted this snap to Instagram, which reads “beef over!” Snoop captioned the post, “Done deal. Now bac to mi vida loca!!!!” 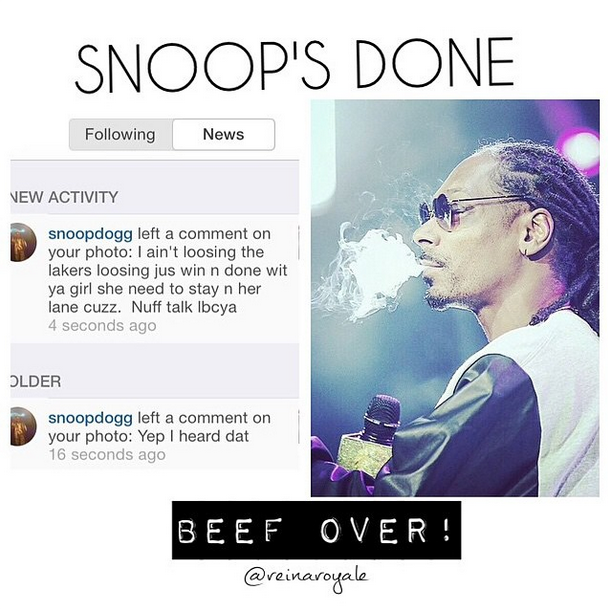 We’re glad that it’s all over.