This might be the video of the week, because it will give you the warm fuzzies after viewing the cutest proposal ever. Demi Lovato was in Moline, Illinois, on Saturday when she got the question of a lifetime from a most unlikely source.

A 5-year-old fan named Grant decided to take his love for the pop singer to the next level by asking her a very big question onstage in front of thousands of fans. The Camp Rock star had brought him onstage after seeing his sign in the audience, which read, “Demi, I have a ring for you.”

Grant needed a little prompting on proposal etiquette, so Demi instructed him to get down on one knee. That’s when he popped the question, “Demi, will you marry me?”

Her response? “I will!” Grant also took the opportunity to kiss the “Really Don’t Care” singer on the cheek.

The best part of the short video was watching how excited Demi was in the moment. She made a young fan feel so special. 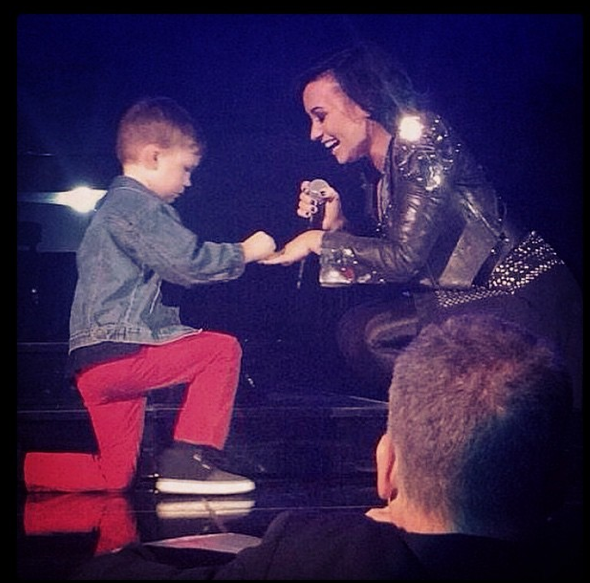 There’s no word if her longtime boyfriend, Wilmer Valderrama, had anything to say about a younger man stealing his girlfriend. Although, he did post an interesting tweet on Oct. 13. Could he be sending a message to his 5-year-old competition?

While the star has nothing to worry about with Grant, the fan might have put a marriage bug in Demi’s head. Let’s see if there are real wedding bells in the former X Factor judge’s future.

Watch Demi Lovato get engaged to the fan in the video below.