Duck Dynasty‘s John Luke Robertson has just gotten engaged to his girlfriend, Mary Kate McEacharn. The reality TV star popped the question to the love of his life on his 19th birthday, Oct. 11, and she said yes.

Duck Dynasty’s Phil Robertson has a plan for ISIS (VIDEO)

Obviously, Robertson is super-excited about becoming an engaged man, and he released a statement to Us Weekly expressing his happiness.

“I am so excited to marry my best friend,” he told the publication. “I know my parents married young as well, and they have always been examples of what ‘could be’ to me. Fast-forward 22 years and they are more in love than ever, and I hope Mary Kate and I are the same way in the years to come. God has truly blessed us.”

But how does his sister Sadie feel about her brother getting engaged? Especially since the lady he’s going to be marrying is her best friend.

Dancing With the Stars offers up eclectic cast for Season 19

E! News caught up with Sadie backstage at Dancing with the Stars and asked her to share her thoughts on the engagement.

“My brother got engaged to my best friend!” Sadie said, but it turns out she’s not jealous to be sharing her bestie with her brother, because she added, “That’s super-exciting!

“I knew it was going to happen. Like I said, she’s my best friend, and she’s been my best friend since before they started dating, and I had [known] it was coming, and I was super-excited!” she added.

Robertson and McEacharn shared their engagement excitement with fans via Instagram, too. On Sunday, Oct. 12, the bride-to-be posted a very cute snap with herself and her beau, who was holding a sign that read, “Future Mrs. Robertson.” 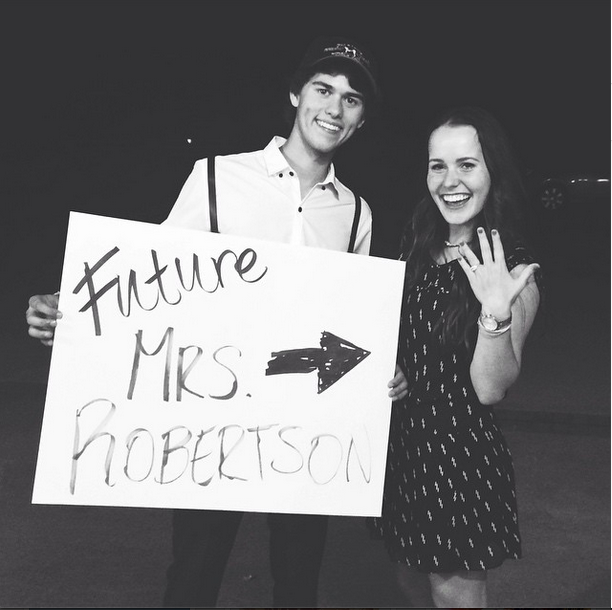 McEacharn captioned the snap, “Happy Birthday to the boy I’m going to marry.”