Justin Timbelake might have taken two years after he got married to post a photo on Instagram of his wife, Jessica Biel, but the sweet shot proves the pair is happier than ever.

The romantic singer shared what is his first ever picture of Biel on Monday, just six days short of their second wedding anniversary. The very rare shot features the handsome couple sitting on a wooden bench overlooking the water from a cliff in New Zealand. 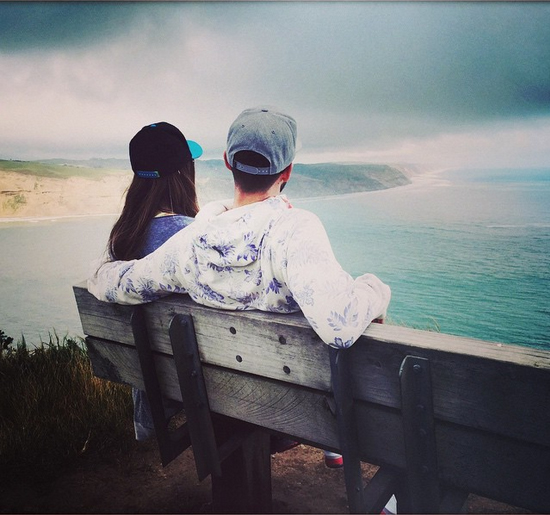 The sweet photo, which Timberlake captioned with a famous quote from the 1986 movie, Ferris Bueller’s Day Off, was taken during a break from the “Not a Bad Thing” star’s down under leg of his 20/20 Experience tour.

Biel has decided to join her husband during his latest world tour, which also dispels any rumors that there is trouble in paradise for the fan-favorite couple.

Timberlake and Biel’s tendency to be so secretive and private about their relationship has led to many rumors that they may be having marital issues. However, the pair seems to be getting along just fine, even if they are rarely ever seen in public together.

One of their few public outings together took place this past June, when Timberlake was photographed at Lakeside Golf Club as he putted away with some buddies, while Biel sweetly looked on from a golf caddy. Then, some time after their wedding, the two gushed about each other in separate appearances on The Ellen DeGeneres Show. Biel told DeGeneres how happy she was to finally be able to call Timberlake her husband, while, a few months later, the former ‘N Sync front man revealed how right it felt to have married the actress.

“Every once in a while I can catch a glimpse of her when she doesn’t see me looking,” Timberlake told DeGeneres. “And I have this moment where I’m like, ‘If you ever make a good decision… if you only make bad decisions for the rest of your life, you made one really good decision.'”