Wow, who knew Snoop Dogg could be so mean?

The rapper always seemed like a chill dude until he went after Iggy Azalea on Instagram, mocking recent images that surfaced of the singer without makeup on. The photo Snoop posted over the weekend showed an albino-looking woman with cornrows. 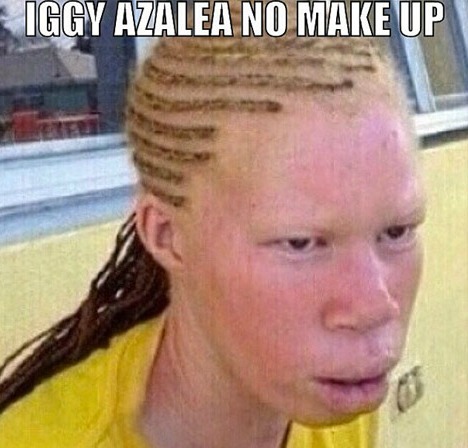 According to TMZ, the Fancy singer took to Twitter after seeing the picture on Monday. “…why would you post such a mean pic on insta when you send your body guards to ask me for pictures every time we are at shows.”

She continued, “I’m disappointed you’d be such an ass for no reason.”

Azalea has since removed her Twitter rant, but not before the internet caught wind of the bad blood between the two rappers.

Snoop has yet to respond or take the photo down, though he’s been posting his usual plethora of Instagram images all day today.

We don’t think Azalea let Snoop’s rude post get under her skin for long. After all, the singer has quite the reason to celebrate. It was just announced that Azalea leads the pack for American Music Award nominations.

Most notably, she is up for the categories of Favorite Female Artist, Favorite Artist (Rap/Hip-Hop) and Favorite Album (Rap/Hip-Hop). We don’t think there is any Twitter response necessary other than Azalea’s success. Take that, Snoop!

Snoop fans have since commented on the photo, defending his post as a joke, but is it ever OK to joke at someone else’s expense? It just sounds like bullying to us. We think Snoop should man up and apologize.