I thought last week’s episode of Scandal would be tough to top.

And, well, it was. I mean, we had Harrison’s funeral, Olivia’s curly hair and Genius Bar Huck. Not too much could top all of that. And while I don’t think it was as good as last week’s, there were still some highlights, the best of which was Olivia Pope keeping her fabulous boots on while… well, I won’t spoil it for you. (Hint, it’s No. 6 on the list).

1. Case of the week: Livvie took on a boring case based on a war hero and his wife, who was shot and paralyzed in a school shooting based loosely on real-life events

It turns out these America’s sweethearts, slated to attend President Grant’s SOTU address in which he advocates for gun control, actually hate each other. I mean, really, really, hate each other. At the beginning of the episode, the couple is fighting, and the husband yells out: “I was tortured by the Taliban, and it was better than this.”

2. David Rosen grew a pair, and I almost stood up and clapped

In my living room. In my PJs. As an honorary law-enforcement officer (a title that I’ve bestowed upon myself) I’m not one for cheering when someone breaks the law. But after having a girlfriend (Abby) who helped a coworker (Harrison, R.I.P.) set up a false domestic abuse accusation, losing your job to become a teacher to the brattiest high-schoolers known to man and seeing your colleagues and the Chief of Staff’s husband shot by the head of a secret government organization — let’s just say Rosen needed a win. And this time he got one.

Watson: “This is blackmail.”

Rosen: “I like to think of it as winning.”

3. Cyrus shows us that he does, in fact, have somewhat of a heart

As a mom, I’ve totally thought about my children dying before me. And as much as I would have loved to have stood by Mellie (my God, how could you not stand by a woman who has ordered Southern fried chicken from the White House’s chef?), Cyrus brought it all home after she said he couldn’t compare losing his husband to her losing her teenage son. 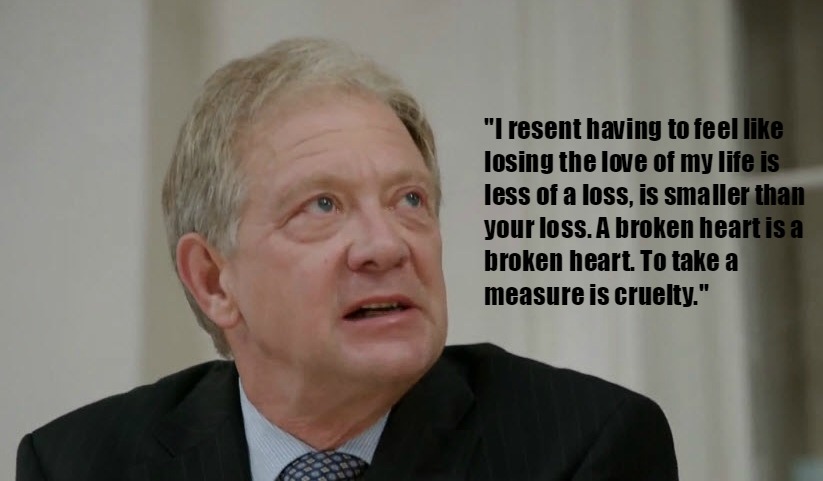 According to the Twitters, there are lots of folks out there who are #TeamMellie. Anybody who knows me knows that I have a hard time being on the side of someone who wears sweatpants and Uggs at the same time. But I empathize with her situation. No lie, if something happened to my kids, I would be laid out across the gravestones, too. But it’s sad that it took this moment for her to finally stop playing second fiddle to her husband, the president, who is actually just a cheating a-hole, if you ask me. After Fitz and Cyrus confronted her with news clippings of her at her son’s grave site, she threw out a version of the Southern standard “bless your heart” so fast it would make your head spin. 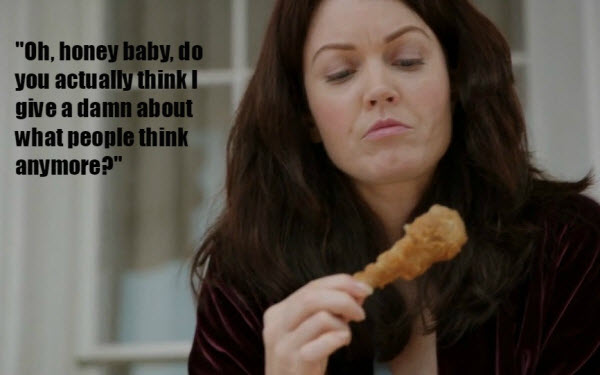 5. Abby finally made a speech that didn’t annoy me

Abby is fine. Not as awesome as Olivia, but not nearly as annoying as Quinn. But still. Her monologues were not what I would call “the business.” But she stepped her game up and got a still-grieving (and rightfully so) Mellie Grant to attend the SOTU address with a monologue that bordered just on insensitivity and insubordination without stepping over the line. Sorry for all the condensing, but trust me, this was a loong rant and probably the most important two minutes Abby has ever had.

Abby: “…if Jackie Kennedy could be in a car with her husband’s brains splattered across her lap one minute, and standing next to L.B.J. … just 99 minutes later, you can put on a dress … and show all the people… that the first family is devastated … but has not forgotten the American people.”

She shows up to Jake’s hotel room with what is undoubtedly a rare and expensive bottle of wine, reads him and drops her (flawless) trench coat, where she, of course, is wearing nothing underneath. ‘Nuff said. 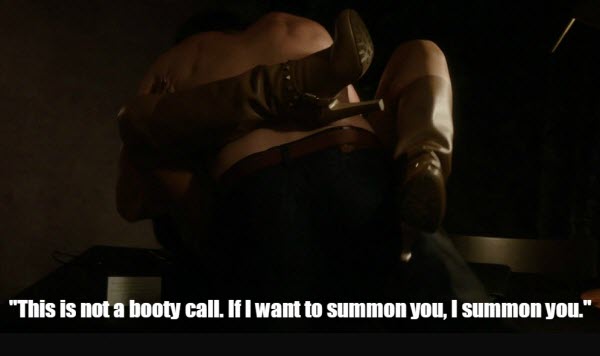 In the end, Fitz gave a heartfelt, if not completely unlikely, speech advocating for gun control, Huck and Quinn almost kissed (or more!) again and Cyrus ended up taking a male prostitute up to his room in a move that is some kind of setup perpetuated by a shrewd Portia de Rossi, who is playing Fitz’s campaign manager.

So what moments did I miss? Is Cyrus going to fall for the pro? Will Olivia and Fitz spend more than five minutes alone? Will we please never be forced to watch another Huck/Quinn sex scene again? Let us know in the comments.