One Directioners have been suggesting a love story between bandmates Harry and Louis for years. But is “Larry” really a thing? We investigated.

It’s hard to know how to feel about the rumors that One Direction members Harry Styles and Louis Tomlinson are in love. On the one hand, fan reaction is so overwhelmingly giddy about the possible relationship that it makes us proud of the next generation for being so open-minded. On the other, it’s hard to contain our crushes on Styles and Tomlinson, which means there’s a part of us that is dying to know if they’re swinging for the other team… or if any of us ladies stand a chance of tousling those locks. So, we did what any red-blooded, post-pubescent girl would do and what many 1Ders have been doing for years: we investigated.

Have you seen the video for 1D’s new perfume?

All “his” little things

The most recent evidence of a Larry pairing is sketchy at best. Take this speaker-busting video of One Direction performing “Little Things” in Charlotte, North Carolina, recently. The fan behind the camera begs for and then swears the line sung live is “All his little things” instead of “these.” As soon as the line is sung, she goes into meltdown. Still, as one comment points out, it still sounds a lot like he’s singing the original lyrics. Wishful thinking, maybe? Or is it just not as clear in the video as it is in person?

One Direction fans’ biggest support for the Larry cause, though, are all the videos of interviews they’ve spent so much time analyzing. There are whole Tumblr pages and a hashtag devoted to supporting Larry evidence and in some instances, it’s easy to question. In one GIF, Harry and Louis do some pretty intense staring into each other’s eyes. Another moment, though, involved Louis chugging on a bottle of water and stroking a well-placed microphone. While that’s certainly suggestive, we wouldn’t go so far as to call it proof that the boys are hooking up. Just proof that even boy-band members enjoy a good dick joke.

Another big issue we have with the Larry shippers: their concerns with how cuddly the two mates are. We think it’s sweet how much they root for these two guys but we need to get a grip on obsessing over water-bottle sharing and any sort of touching. First and foremost, this gang shares some pretty tight quarters. It’s as if they weren’t already used to sharing with siblings, they’ve since gotten used to sharing with one another. Watch any touring band close enough and you can witness bandmates sharing not only water bottles but burritos, cigarettes and toothbrushes. Seriously. As for the cuddling: Again, they’re used to be in tight spaces together and piling on top of one another and used to being one another’s only real friends on the road. They’re also European. We’re not sure why American dudes are so homophobic about being close with their pals, but we promise this is not the norm. European guys are infinitely more affectionate with each other than anyone else. Proof: 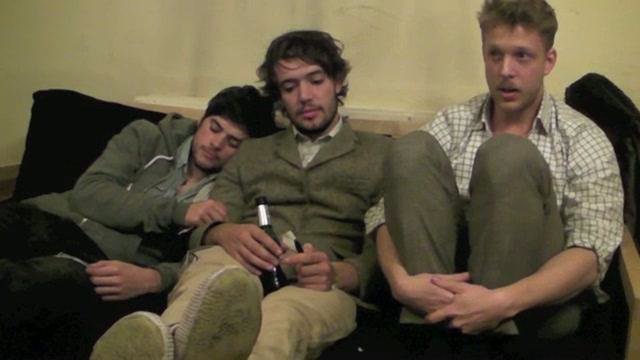 And, side note: Why is it “gay” if two boys lean on each other but totally acceptable and straight for girls to form cuddle puddles? No one questioned Lena Dunham’s sexuality when she bathed with her buddy on Girls. We’ll never understand this double standard.

The crotch grabbing, though? Very suspicious!

All that said, the boys are pretty handsy. It’s one thing to pile on a couch with someone or smack your pal’s bum. It’s quite another to continually grab at his family jewels. What’s with all the crotch grabbing? If ever there was a sign of some mixed feelings, it’s that.

So, after delving into the deep, dark world of Larry shippers, we’re still just as unsure as we started out. One thing is for sure, though: We remain utterly impressed with the devotion 1Ders give to supporting their favorite band and love you for being so 100 percent cool with whatever your favorite boys choose. Well played, ladies. Now, let’s go score some crotch grabs of our own!

Want more music news and insights? Sign up for our newsletter