As a longtime writer for London’s Times and author of the award-winning How to Be a Woman, Moran’s not afraid of shock value. The opening page of her new novel features young Johanna Morrigan as she wanks in bed beside her sleeping little brother. Yes, this is semi-autobiographical.

“When I was a teenager, I masturbated furiously,” said Moran. “All over the place. I remember doing it in ridiculous places like up a tree or in a wardrobe.” Sex is, initially, the main drive of fictional Johanna. She really just wants someone to get her naked, but there are roadblocks. She feels like the odd, fat, outcast; plus, there aren’t any doable men in her small English town of Wolverhampton. 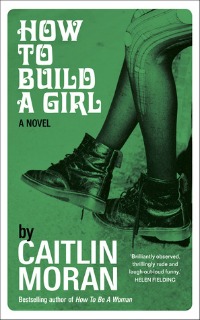 To escape to London, Johanna builds a personality: Dolly Wilde, music critic. Moran recalled her own chubby years, spent dancing to Stevie Wonder in the dark. “A lot of teenage girls are just really lonely,” she said. “That’s why Johanna created Dolly Wilde. She’s her crazy friend. I want teenage girls to know it’s OK to be alone. You can make friends with yourself. You won’t die of loneliness.”

As you may expect, being a teenager in the music biz can get you in a bit of trouble, as Johanna discovers the hard way in How to Build a Girl. Once she finds the right job, she keeps on building her image and soon becomes the feared, top hat-wearing meanie slut of the music scene.

Moran began her early writing career with Melody Maker, and, well… guilty! “There [were] about six months when I was working at Melody Maker when I began writing increasingly bad reviews. I was pretending to be a bit of a c***.” Thankfully, she soon came to a realization that would shape the rest of her life: “The world is joyful and fantastic!”

Must-read: How to Be a Woman by Caitlin Moran

Despite her exuberance over the mere mention of breakfast, Moran is still considered somewhat controversial, but it’s never been her plan. She said, “I never start writing something with the intention of saying, ‘Hey, you’re all wrong, you asshats! Let me lay the truth on you.’ I don’t want to have an argument, but I do want to change people’s minds. I’m just a gay-loving, Marxist, Benedict Cumberbatch fan.”

She’s had a long-term fantasy affair with the British hottie ever since Sherlock premiered in 2010. The night of Episode 1, she had a few drinks and invaded Twitter. “The first couple tweets were like, ‘As you can see, this is a very quality drama,'” she said. “Then, the fifth one was, ‘I would climb him like a tree. I would do him until security pulled me off, and then, I would wank at him from behind a door.’ I was becoming increasingly hysterical, because he was so beautiful.”

What she didn’t know at the time was that Steven Moffat (the show’s creator) was sharing each and every tweet with Cumberbatch in real time. Understandably, when Moran first met “Sherlock” on set, Cumberbatch looked a little nervous, although she can now proudly say that if you get him drunk, he’ll do impressions of Smaug, the dragon from The Hobbit. And yes, he lets her call him “Benny.”

Speaking of dreamy dudes, Moran created one heck of a guy in fictional rocker John Kite, young Johanna’s obsession for good reason. Moran said, “I invented him and want to have sex with him. Is that crazy?” Nope. I completely agree. He’s an amalgamation of rockers she interviewed over the years, and yet, he’s his own man.

SK Confessional: I’m obsessed with Benedict Cumberbatch, and here’s why

Kite is completely different from all the other romantic interests in How to Build a Girl, and this was on purpose. Moran said, “We accept that men are just animalistic dicks that will f*** us because we fancy them, so I wanted to show a working-class boy with honor. Oh, I love that man.”

There’s already a movie in the works, set to start filming this time next year. Moran is most nervous about casting Kite. “Casting John Kite? Nervous? Yeah,” she said. “In my head, he’s a young Richard Burton. I want that kind of unconventional beauty. I guess we could dig up Richard Burton and reanimate him.”

So there’s a film and two more books on the way with Johanna at the helm. When we first meet her, she’s 14. When the first book ends, she’s 17 and well bedded. But, according to Moran, Johanna has a long way to go and a lot of important things to do. “We seem to think now that people can’t change anything, so I wanted to write a trilogy in which you follow a girl from 14. You know her and know she didn’t come from a privileged background. You see her build herself, and by the end, she takes power.”

Moran continued, “I really want to show women that they can take power. You could start a revolution. You could change the world. But there’ll be a lot of sex in the books, of course. Revolution and a lot of f***ing.”

Why I’m raising a feminist

Johanna is a strong, brave female protagonist, and well she should be, as Moran identifies herself as a proud feminist. She has a pretty broad definition of feminism, really. “If you’re a woman expressing yourself and making money and having power, then you’re a feminist.” Moran is very proud of her own accomplishments and of the accomplishments of her fellow females. Still, she recognizes a fatal flaw in the feminist agenda.

She said, “A lot of feminists get angry, and I understand that’s because they’ve been shat on. The thing is, when you communicate in anger, what people generally pick up on is the sound of your voice and will just be angry back at you. If you really want people to hear what you’re saying, it’s best to be calm and humorous, because then, everyone’s butt has been unclenched. You start having a reasonable debate.”

As much as her critics might want to cast Moran as a cynic or figure of controversy, she seems more likely a woman of joy. “You’re supposed to enjoy your f***ing life,” she said, “and find as much happiness as you can. You’re here for a very short amount of time. It’s our right and our duty to try to enjoy our lives as much as possible.”