Rachelle Lefevre is busy these days. From starring in the hit show, Under the Dome, to playing opposite John Cusack and Ryan Phillippe in the new thriller, Reclaim, she somehow managed to find time to share a few exciting details with us.

Rachelle Lefevre stars in the new film, Reclaim, along with Ryan Phillippe and a shockingly creepy John Cusack. We asked the intelligent and beautiful Lefevre what we can expect from this new thriller.

“It’s about a couple who go to Puerto Rico to adopt a child from what they think is an international adoption organization. They have what they think is the beginning of a really great family, but it all goes terribly wrong. They become embroiled in a terrible scam. Ultimately, they decide they’ll do whatever it takes to get their daughter back.”

Lefevre says playing the role of Shannon was personal to her. “As a woman, I think a lot about being a mom — that’s something I really want to do someday. But I’m not a mom and I had to really think about what was at stake. What does it mean to be a mother and what is that connection. It’s an instantaneous transformation — whether you adopt or you’re pregnant, you wake up one morning and you don’t have a child, then you wake up the next day and you do. Your entire identity shifts.”

We wanted to know if the Under the Dome actress learned anything about herself by playing Ryan. “I learned that I’m comfortable in the role as mom, giving up everything that matters to me for someone else. If you’re not prepared to not come first, you probably shouldn’t be a parent.”

John Cusack plays Benjamin, a dirty scam artist who’s so creepy, he makes our skin crawl. Lefevre said he was lovely off the set, however, and she really enjoyed working with him. 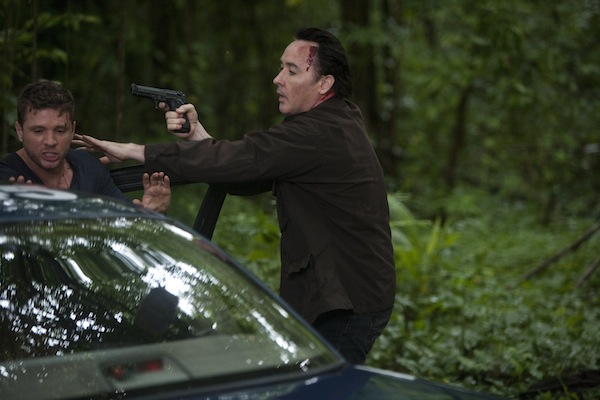 “My favorite thing about working with John Cusack is that he does a lot of improv. He’ll follow the scene wherever it wants to go. It’s really fun to play. Sometimes, he would start with the end of the scene and then we’d play all the beats backwards, so you have to be really ready to see where it goes.”

As of late, Lefevre has earned a reputation for being outspoken when it comes to how women are portrayed on television. We asked her why.

“Unfortunately, there’s still something in our time where we’re comfortable with women being as smart and as strong as men as long as they’re willing to apologize for their intelligence. As long as they’re not making anyone uncomfortable. A woman can’t disagree the same way a man disagrees. It’s not, ‘I think you’re wrong, here’s why.’ It’s, ‘I’m sorry, but I don’t agree with you.’ It’s a different tone.

“Women are often portrayed as overly fragile and not as capable as I think they should be. And this is not all women, some are fragile and some men are fragile. I don’t think the portrayal should be one-dimensional, only that there’s an even spread. Thankfully, it’s getting so much better. We just need to make sure it stays that way.”