Normally, we don’t really draw any clues from TV cast posters, but the just-released photo for The Vampire Diaries Season 6 is different. We definitely couldn’t help but notice a few things that appear to be key hints at what’s to come in the new season.

1. Elena and Stefan are holding hands but looking in different directions

Obviously, these two will be banding together to reverse the spell on Mystic Falls that doesn’t allow vampires into the city. But we don’t thinks this means the two will be rekindling anything other than a close friendship. After all, Elena (Nina Dobrev) seems pretty set on not moving on from Damon (Ian Somerhalder).

2. Everyone is in black, except Bonnie

The color scheme for clothes is definitely black, yet Bonnie is wearing a plum-colored dress. It could just be that it’s because she is definitely rocking that outfit, or maybe it means something deeper. Could Bonnie be a central figure in this upcoming season even though she’s dead?

3. Damon and Bonnie are linking arms

These two traditionally hate each other, but as they walked into the light together last season, there was a moment of respect where they faced the unknown together. Perhaps they have been linked through that experience and we’ll see a different relationship form as they struggle to return to the land of the living.

4. Caroline is sitting on the ground alone

Executive producer Julie Plec told E! Online, “Caroline isn’t going to let Stefan off the hook very easily. In fact, his determination to move on and start a new life after the loss of his brother may ultimately ruin the friendship he’s built with her over the years.”

The show was pushing Steroline pretty hard at the end of last season, but now it looks like Caroline’s (Candice Accola) love will become unrequited, which explains that sad look on her face.

Hiss all you want: Caroline and Klaus’ love is eternal >>

5. Enzo is standing behind and between Elena and Stefan

Since Enzo’s entrance in the show, he’s been the guy we want to trust but just really, really don’t. Will he finally prove himself this season by banding together with Stefan (Paul Wesley) and Elena? Or is he going to make a mess of things as they fight to fix everything that went wrong at the end of last season?

This could refer to one of two things: Either the fact that the supernatural limbo is gone because Bonnie died, or the traveler’s spell over Mystic Falls. Maybe both? We know things will not be good when we return to the show, but perhaps this phrase refers to the good that’s to come in the next season instead of more bad? We can hope, at least. 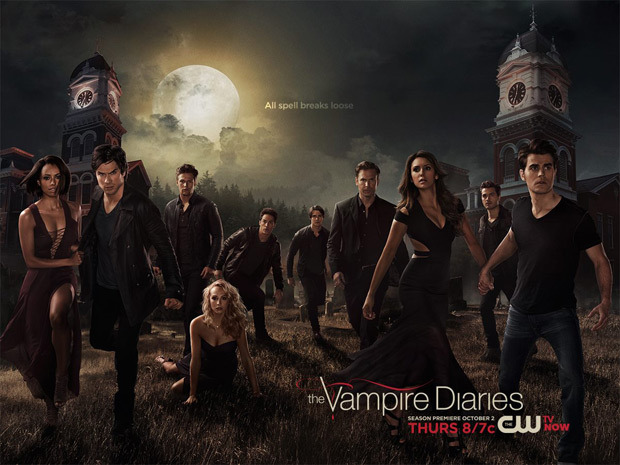 7. The mirrored clocks show one light, one dark

8. It’s a full moon, which means Tyler should have turned

We’re pretty convinced that after Tyler’s ordeal on the other side, he’s returned different somehow. And we’re happy for it, too. We were really getting sick of hybrid Tyler. But he’s still far from one of our favorites on the show, especially after seeing the sneak peek for the first episode. He and Liv seem to have some sexual tension brewing. He sure has a thing for blondes. Since we don’t really like her either, though, maybe they’re the perfect match.

9. Matt, Tyler and Jeremy are all standing close to one another

We loved this three musketeers-style bromance last season, and we hope the fact that they’re all standing near one another suggests that it means the friendship will continue to develop. We could definitely see a story line where these three decide to fight some supernatural crime.

10. The front two couples are the only ones touching

Season 6 of The Vampire Diaries premieres Oct. 6 on The CW.

What other clues did you find in the Season 6 poster?