When Westley from The Princess Bride calls your phone, it’s only natural to start screaming. Actor Cary Elwes even told me to just let it out. I didn’t. I kept things professional, although I did giggle like a little girl.

Let’s face it: If you know movies exist, you know about The Princess Bride, a timeless tale of love and pirates, directed by Rob Reiner. The film was first released in 1987 at the Toronto Film Festival, and although it had a slow start, the VHS market bolstered the small budget fairy tale to immortal fame.

It has now become one of the most quotable films of all time. Inconceivable, you say? … Ha, see what I did there?

In the introduction to his new book, As You Wish: Inconceivable Tales from the Making of The Princess Bride, Cary Elwes (made forever famous for his role as farm boy turned sexy pirate) lists just a few of the immortal lines: “Have fun storming the castle,” “Rest well, and dream of large women,” “Get used to disappointment,” and the list goes on.

His personal favorite? “Anybody want a peanut?”

As you wish! The Princess Bride cast reunites >>

Inspired by the recent 25th anniversary of the film’s creation, Elwes decided to write about his experience, he said, “before my memory fades too quickly.” He was practically a kid when Reiner chose to cast him in the pivotal role of Westley. 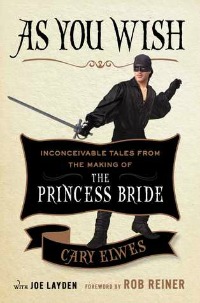 Elwes read the book, The Princess Bride, by William Goldman, when he was just 13. The script (also written by Goldman) fell through the filmmaking cracks several times in Hollywood before Reiner made the plan a go.

When Elwes first read the script, he said, “I thought it was brilliant. It captured the essence of the book, which is a really hard book to adapt. The only person who could have done it was Bill. It was his favorite book and his favorite screenplay, so he was nervous about us making the film.”

Goldman certainly was. There’s even an anecdote in As You Wish about the frightened screenwriter ruining the sound in a scene because he was praying on set.

Not entirely true. Elwes knew he was clumsy, and he knew he had a heck of a sword fight scene to film. On top of the Cliffs of Insanity, The Man in Black must face Inigo Montoya in what Reiner called “the greatest sword fight in modern history.” Easy, right? Uhh….

“Two months of training for me; four for Mandy,” Elwes said. “Every day for two months, even while I was shooting, the trainers would be right there.” (All this with a broken toe, by the way.)

The action sequences could be considered easy compared to working with Billy Crystal. Both Reiner and Elwes were banned at one point because they couldn’t stop laughing. It was the scene where Westley is “mostly dead,” and Miracle Max brings him back to life. Elwes said, “When Billy started doing his Yiddish stand up, I was done for. No one had warned me. He started, and that was that. Both Rob and I had to be removed from the set.”

As You Wish is a labor of love. You can feel the adoration for gentle giant Andre and Elwes’ crush on co-star Robin Wright. The book not only gives a behind-the-scenes look at a Hollywood classic, but there are insightful comments and interviews with Elwes’ co-stars and creators of the film. It’s a must-have for any Princess Bride enthusiast, and there are many of us.

See, I’m not the only girl who screams at the mention of Cary Elwes. One of his weirdest moments made a very permanent impression on a fan. As Elwes explained, “I met a young fan who lifted her hair and showed me that on the back of her neck she had ‘as you wish’ tattooed in rather large letters. She handed me a Sharpie and said, ‘Would you sign it so I can get your signature tattooed?’ Her mother was standing right there and said, ‘Go ahead, do it!’ Well, if the mother insists, what was I going to say? So somewhere, there’s a girl walking around with my name on her neck.”

He has also met full families named after Princess Bride characters. Gotta feel bad for the girl who has to go through life as “Buttercup.”

Reiner’s masterpiece is timeless, and Elwes chalks this up to a good time. “It was made with a lot of heart,” he said. “We all had so much fun making it, so I think there’s something to be said for that. It’s a tale about love. It’s a fun movie about princesses and pirates.”

Elwes himself is just as charming as his fangirls would hope, with his easy-to-recognize voice and a contagious laugh that never stops. As You Wish is his ode, practically a love letter, to the movie and people involved. There is something magical about The Princess Bride. We true believers know it. As Westley says, “This is true love. You think this happens every day?”