It’s been more than 10 years since we last spent a weekly half hour with our favorite sextet, and that time has been ample for us to conclude many things.

Related story Costco Is Selling a ‘Friends’-Themed Advent Calendar & Could We BE Any More Excited?!

There is probably still a worldwide shortage of hair gel given how much of it Ross used during the show’s 10-year run, Joey was at his hottest during season five and, while we are hesitant to play favorites with the six friends, if a gun was being held to our heads, Monica Geller would be the obvious choice for Friends MVP.

Sure, Phoebe was the wacky one, Ross was the smart one, Chandler was the quick-witted one, Rachel was the self-involved one and Joey was the dumb one — and all of those characters were developed both early on and in incredibly clever ways. But Monica’s character quirks were developed to a tee and they were often the source of gut-wrenching laughter. She didn’t just have one defining aspect; she had many, and they were all equally hilarious. Not to mention, her ambition and vulnerability resulted in some of the show’s most touching and heartbreaking moments.

In fact, it’s downright criminal that Courteney Cox received nary an Emmy nomination during the show’s run and, to be honest with you, whenever I’m reminded of this, the only way for me to cope is to have some alone time, which is usually spent wallowing unconstructively (what can I say? I’m very affected by injustice in this world). This time, however, I put this alone time to good use and, so, I present to you five reasons you should be ashamed of yourself if Monica isn’t your favorite Friends character.

1. Her obsession with cleanliness and order

Full disclosure: I’m the kind of person who dusts her vacuum cleaner and it’s unlikely you’ve known rage unless you’ve come into my house, picked something up and then dared to put it back at an angle different to that in which you found it. So, it should come as no shock that Monica’s anal retentiveness is, in my opinion, a key part of the charm that is Monica Geller. Even Monica’s mess is ordered (see “The One With the Secret Closet”) and Chandler’s attempt to make her life less stressful by hiring a maid only increased her stress (“I hope by ‘maid’, you mean ‘mistress,’ because if some other woman was here cleaning… “). Let’s just be real here: Many a TV show has tried to milk a character’s obsessive cleanliness for laughs and none of those characters are remotely as hilarious as our little harMonica.

Everything Friends taught us about love >>

2. She could always be counted on to tell it like it is

I would like to present as evidence the following quote: “Judge all you want, but… married a lesbian, left a man at the altar, fell in love with a gay ice dancer, threw a girl’s wooden leg in a fire, living in a box!” I rest my case.

3. Her hair couldn’t cope with humidity

During season nine’s trip to Barbados, Monica’s hair expanded to such a width that she couldn’t hear through it, tried unsuccessfully to keep it down with a simple baseball cap (she looked ridiculous), resorted to cornrows as a solution (she looked even more ridiculous) and ended up getting stuck to a shower curtain. I’m going to be honest, this two-part season finale wasn’t Friends’ best, but Courteney Cox’s hair performance was a thing of beauty, so much so that she was nominated for Best Supporting Hair — Television Series Musical or Comedy at the 2004 Golden Globes ceremony. (OK, not really, but I’m still trying to numb the pain of that Emmys snub. Would it surprise anyone if the Golden Globes did have such a category, though?) It’s no surprise that Monica having hair big enough to house a family of four during a hurricane is what has me watching these episodes over and over again and laughing harder and harder every single time.

4. She knew what she wanted the whole time and she got it 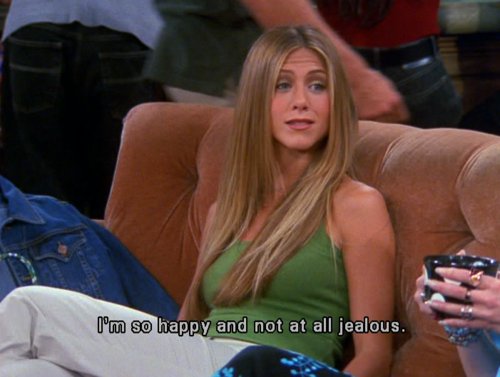 Monica Geller is nothing if not a lesson in perseverance paying off. Right from the get-go, Monica had a pretty clear view about how she wanted her life to turn out and she wasn’t prepared to settle for anything less. Although clearly infatuated with Richard during the show’s early run, she broke up with the walking mustache because she wanted kids and he didn’t. When Chandler had his inevitable freak-out in the early days of their relationship, she laid down the law and told him she wasn’t going to be in a relationship with someone who didn’t want to be in one. Although she was prepared to follow Chandler to Tulsa, she elected not to turn down an amazing job opportunity and, instead, stayed in New York and made the long-distance relationship work (even offering to “get in a tub and thrash” to accommodate a shark fetish she thought Chandler had). And, after many heartbreaking attempts to get pregnant, Monica finally got the family she’d wanted all along when she and Chandler adopted little Erica and Jack in the series finale. Monica Geller: the very definition of winning at life.

5. She really was the heart of the group

When they weren’t enjoying leisurely cups of coffee at Central Perk in the middle of the workday, the group congregated at Monica’s, and there’s a reason for that: Monica was the heart and soul of the group and, therefore, so was her apartment. Everyone’s concerns about her moving to Westchester serves as crystal-clear evidence that, without Monica, the group lost its central force. Monica was the ultimate caretaker and that empty apartment in the show’s final episode is symbolic of how empty our lives would be without Monica. (Insert pause for dramatic effect.)

Want more witty television, music and celebrity commentary? Sign up for our newsletter >>