It seems that The Voice judges this season can’t say enough nice things about newcomers, Gwen Stefani and Pharrell Williams. But one relationship stood out above the rest.

Though all the judges were exceedingly complimentary of one another (with some playful edges of competition thrown in for good measure), Pharrell‘s budding relationship with Levine was the one that caught our eye.

“I knew Adam [Levine] before,” Pharrell said. “We knew each other, and we talked, but, like I didn’t know him in this way that I know him and, like, I knew he was a good person, but an amazing person is how I would define him now, and Blake [Shelton] the same way. This has just been…” Pharrell tapered off, but we’re assuming you can fill in the blank with some more words of praise for the experience.

“Thanks, bro. Blake [Shelton] never said s*** like that to me,” Levine responded. 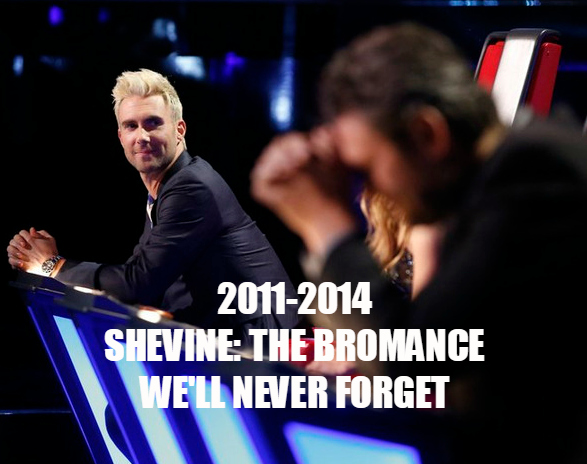 It’s confirmed: Gwen Stefani is the new judge on The Voice >>

And, for the record, Levine hates that couple name. “Time out. Time out. I’ve got to nix that. I can’t do that with the ‘Shevine’ s***. We’ve got to come up with something better. Let’s workshop it.

Don’t worry, we’re calling it. Now it’s all about Phavine. Maybe he’ll like that one more?

“I like it, and I want it to stay,” Shelton said, speaking of his couple name with Levine. But we can’t help but wonder if he was speaking also of the fading bromance between he and Levine.

“Can I just say some nice things about you real quick?” Levine asked Pharrell at one point in the interview. “He’s so talented, Pharrell, that he writes the kind of songs that you know when you hear something, you hear a song and you start humming the tune when you walk away — his songs are so crazy that you don’t even need to hear it to start humming it. You can just be in the middle of your day and you could have heard the song five years ago… and you’ll just be like, ‘Beautiful,’ and, like, that’s how catchy and memorable they are.”

Another thing we noticed during the interview was the amazing banter that flowed so easily between all of the judges. It’s clear to see their personalities will shine through without a problem on camera.

“It’s time for someone else to win,” Stefani said of her competitiveness for the upcoming season.

“No, it’s not,” Levine quickly, but casually, responded, defending his title as reigning Voice judge champion. He’s won the most seasons of anyone.

Blake Shelton and Adam Levine have a fiery bromance >>

Stefani cut in on that one, “He’s offensive to me sometimes. He is so inappropriate and I have been in a band for my whole life and I know inappropriate. He’s just to another level.”

Levine didn’t even try to deny it. “I set new bars for inappropriateness,” he agreed.

At one point, Levine was answering a question about his career success when the reporter who asked began talking with someone else. Levine was quick to call her out, “Stay with me,” he said. “Now I feel bad. I’m very insecure.”

So, it seems that while Pharrell will have Levine’s back in the upcoming season. Stefani will be the challenger, always keeping these boys in check. If the dynamic is half as fun as their interview was, we’re in for a good Season 7 of The Voice.