DC has heard our pleas for a tougher, less boob-alicious superhero and they’ve answered with a Batgirl redesign. She’s younger, hipper and totally badass.

What happens when you give a chick free reign on a comic book? You get the game-changing redesign of Batgirl, thanks to Babs Tarr. She’s as gorgeous as ever, but Tarr’s artwork just might make Batgirl the kind of superhero we’ve truly been waiting for. This isn’t a spandex-clad babe that exists to keep boys interested. This is a selfie-taking, plaid-wearing, butt-kicking chick set to be your new best friend… or your most worrisome foe. She rocks our world and seems like a decent role model for your daughter, too.

Female superheroes and villains almost always have one thing in common: a heaving bosom held just barely in place with excessive amounts of spandex. We get it: the comic book demographics are still being led by male buyers and boys want to see boobs. There are cool chicks out there, though, who enjoy reading about superheroes, and they doesn’t need bouncing breasts to draw them in. The new Batgirl is the answer to that issue. With her super-cool leather motorcycle jacket zipped up, she’s no less pretty than her predecessor… but she’s more badass than bombshell. As women, we enjoy the idea of a “costume” that puts an emphasis on function rather than foxiness while keeping its style and sophistication. 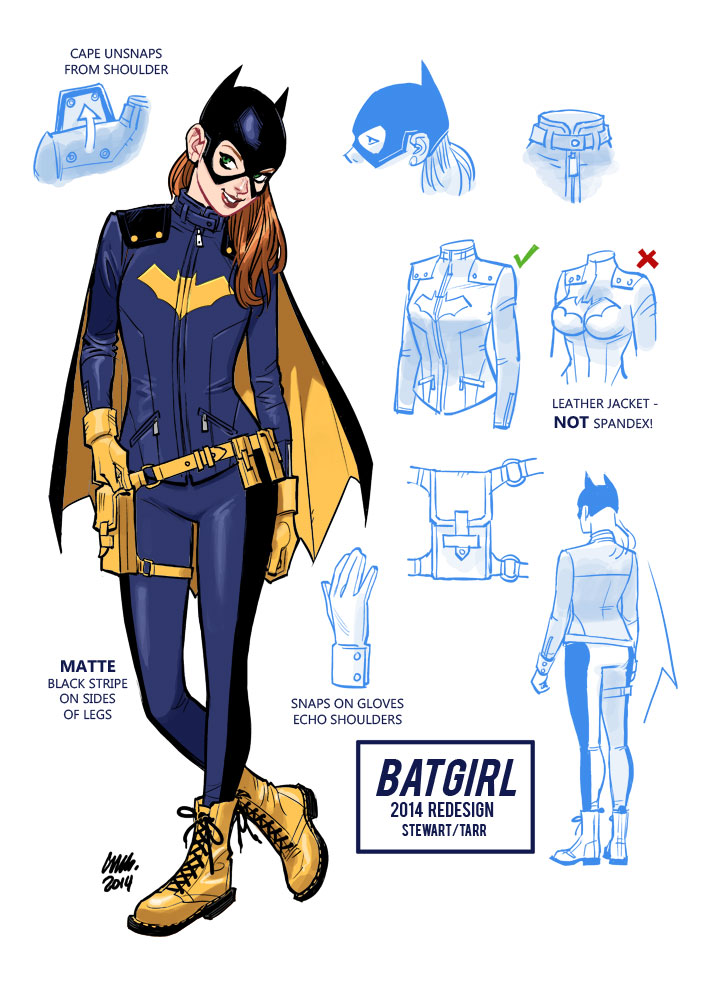 We also appreciate the message the leather jacket delivers to any kid who picks up Batgirl #35. For boys, it suggests a cool, tough girl who is worthy of taking them on adventures. For girls, it shows that there’s more to life than pretty skirts and showing off your figure. Batgirl is gorgeous, but she’s not overtly sexy. She’s the girl we want our daughters looking up to.

And about those boots

We’ve seen our superheroes rock some seriously painful-looking footwear in their day. Wonder Woman wore knee-high boots. Catwoman torments Batman in her stilettos. It’s as unrealistic as Carrie Bradshaw spending her days strutting around New York City in Jimmy Choos. Batgirl’s Doc Martins, though? That’s some solid crime-fighting footwear. The yellow is a fashion statement, but the structure screams practicality. Her feet are staying dry, her ankles are protected and the grip will keep her firmly planted as she skulks across I beams or waits in line to get into a bar. 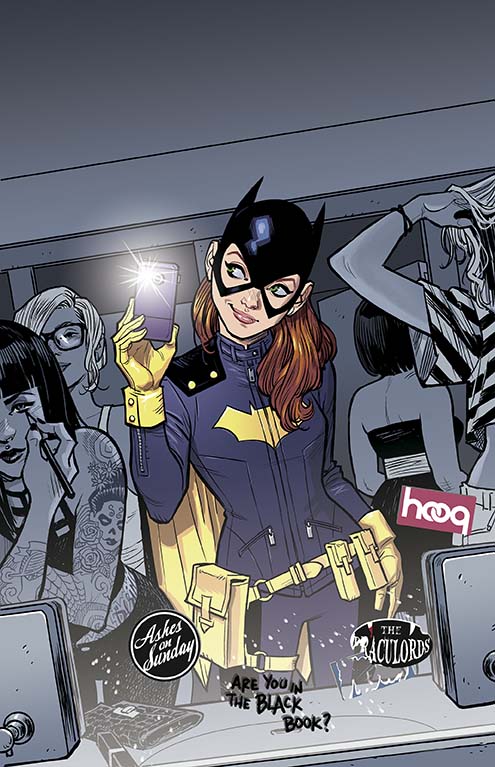 Because she will go out

When we last saw Batgirl/Barbara Gordon in issue #34, her world was looking pretty bleak. After teaming with Huntress and Black Canary to defeat Obscura, her personal life is in shambles. Batgirl #35 shows Barbara picking up the pieces. Leaving the darkness of Gotham proper, Barbara will settle in the hipster neighborhood of Burnside (think: Williamsburg). Batgirl wants and needs a fresh start. Enter the costume change, a brighter outlook and a whole new set of friends. Just as DC has redefined the series with its new creative team (which also includes writers Cameron Stewart and Brenden Fletcher), Batgirl sets out to redefine herself in a (slightly) new locale.

How will it go? It’s safe to say Batgirl will still find trouble wherever she lands. Batgirl #35 hits shelves Oct. 8. Call your local comic book mecca and ask them to hold a copy.