The return of Scandal on Sept. 25 seemingly can’t come fast enough, and we for one are not ashamed to admit that our impatience for the fall premiere has a lot to do with the show’s resident hunk, Scott Foley.

But perk up, fellow Gladiators, ’cause we’ve sure got a sight for your sore eyes. 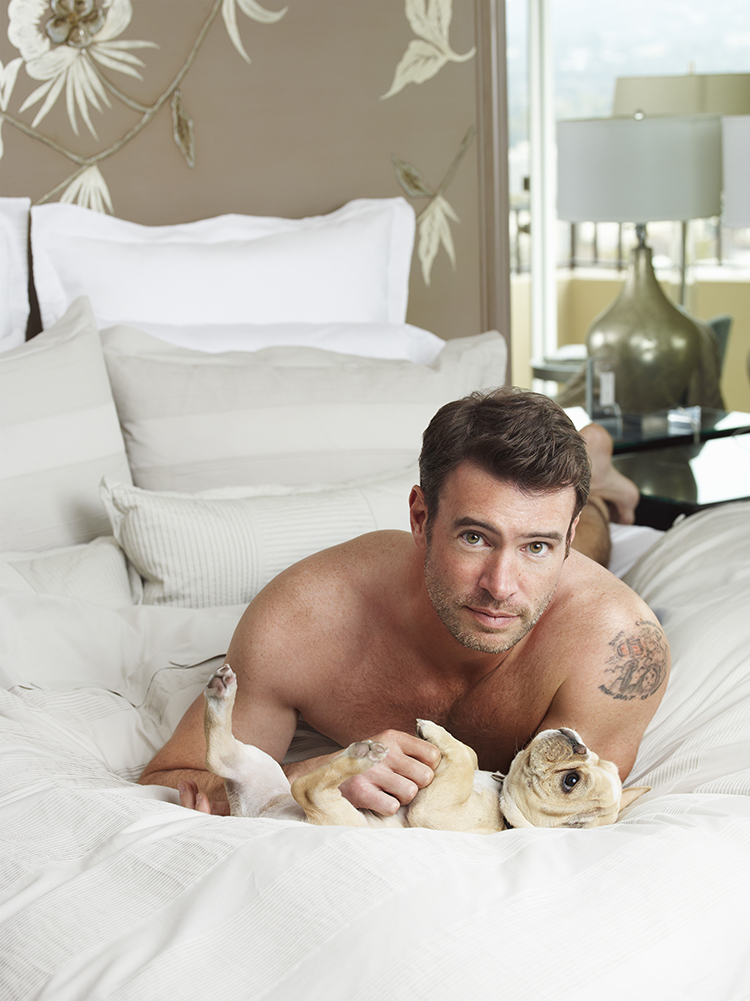 Photo credit: all images, GIFs and video courtesy of Charisma

That’s right. Scott Foley, shirtless, snuggling in an oversized bed with a ridiculously cute puppy. Swoon! In what may be the most brilliant marketing tactic ever, luxury home brand Charisma enlisted the actor to star (for the second time, no less) in their Fall/Winter campaign.

Foley — who plays Jake Ballard on the hit ABC drama Scandal — took a break from his serious show alter ego to playfully pose atop a lavish Charisma bed with precious French Bulldog pups. Also, you know, wrapped in a towel and steaming up the bathroom mirror.

The campaign is set to debut in November issues of newsstand favorites such as Elle Decor, InStyle and more, so it looks like we’ll be loading up on lifestyle and shelter mags in a few months.

Until then, we did the only rational thing we could think to do in this situation: use the behind-the-scenes footage to create dreamy slow-mo images we can ogle until Scandal starts back up.

“I challenge you to wrap yourself in some Charisma sheets and not feel luxurious,” said Foley. “My family and I have Charisma bedding at home, and my wife refuses to sleep on anything else.” Hey, we don’t blame you, Marika. If there was a Scott Foley wrapped up in our Charisma sheets, we’d refuse to sleep anywhere else too.

Oh, you know, just sittin’ around lookin’ sexy and enjoying the feel of this Charisma throw against his bare skin. Bare skin. Bearskin. Scott Foley on a bearskin rug. Charisma, we may have stumbled upon your Fall/Winter 2015 campaign premise.

It’s not often we’re envious of terrycloth, but… We kid, we kid. OK, kind of.

Scott Foley remains craving-free with baby No. 3 on the way >>

Seriously, though — those towels do look incredibly plush and absorbent. If they’re good enough to caress Foley’s face, we’re in. This campaign is off to a good start.

Oh my. This might actually be too cute. Hold on. Let’s look at it from another angle.

Yep, the cute factor is at an all-time high here. Throw a baby in that picture and we’d elect this man to be president. And/or buy a lifetime supply of Charisma bedding.

Don’t sell yourself short, Foley. You’d make a great (-looking) politico, and Scandal has taught you all the Capitol Hill lingo you need. Wait… what’s going on underneath those Charisma sheets?

Too much? Sorry — we meant no disrespect. Let’s get serious, here.

Or not. Errr, nice… towels. Yep, that’s what we’re going to go with.

“My wife has told me that I am sexy, and people on Twitter tell me that I’m sexy, so there must be something there, right?” asked the star, admitting he never actually feels sexy.

Let’s just put this to bed (pun intended) right now. Foley, you are damn sexy. And the fact that you don’t know it? That just makes you even sexier. Well, that and this French Bulldog.

So there you have it. Happy Hump Day, people! And, as if these GIFs weren’t enough, feast your eyes on the full behind-the-scenes sizzle clip below.

www.youtube.com/embed/AGyWoXupcgk?rel=0
You are so welcome.