In classic noir fashion, Oscar- and Pulitzer-winning writer/illustrator Jules Feiffer creates a cast of female characters who won’t take “no” for an answer. In fact, they’ll probably just shoot you.

Kill My Mother must have been a grand undertaking. The book itself is the size of a box of printer paper, and every page is covered with Feiffer’s stunning four-color illustrations. That’s not to mention a story that’s like a roller-coaster ride through hell.

Meet Annie, a teenager whose policeman father was murdered, the suspect never caught. Her mother, Elsie, takes a job working for her dead husband’s best pal, a drunken private investigator, in the hopes that together, they will find her husband’s killer. Meanwhile (in classic film noir setup), a mysterious woman approaches the PI in search of her missing sister.

Fight Club 2: Why a comic book series is the perfect medium >> 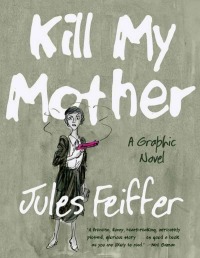 As time passes, we meet Annie’s hopeless pal, Artie, who eventually becomes a World War II soldier. We meet an ex-boxer-turned-tap-dancer named Eddie Longo. The mysterious woman turns out to be Longo’s gal, Mae, who wears the pants (and carries the gun) in their relationship. Finally, there’s sexy movie star Hugh Patton, who develops a liking for Elsie.

The story culminates when our characters go on a USO tour on a war-torn South Pacific island. Let’s just say everything goes to hell.

There is something truly Tarantino-esque about the imagery and plot line of Kill My Mother. A lot of people get murdered, and the characters are all at least a tad despicable. The difference? Tarantino rarely uses enough strong female characters. Feiffer’s females are the strong. They are the most macho characters in the book.

Not only has Feiffer created women to root for, but he has created a story that will confound you until the very end, when you’re bound to break out in a dark, victorious guffaw. Kill My Mother was inspired by Feiffer’s love of films from the 1930s and ’40s. This adoration comes through on the page, because as soon as you open the cover, you’re there, in the story, fighting for your life.

Feiffer is known for his long-run comic strip called Feiffer. He won the Pulitzer for his work with The Village Voice. He won an Academy Award for a short film called Munro. I can see why. He uses messy lines to create the perfect character expressions. His use of shading makes you look closely and pay attention. My favorite part, though? The way Feiffer draws death. The man has a knack for corpses.

In Kill My Mother, normal housewives go Dirty Harry. Whiney men get what’s coming to them. Flaws are as interesting as positive attributes, and you’re not entirely sure who you’re rooting for. I guess you’re rooting for Feiffer, because with this new graphic novel, he has added to a long list of award-worthy work.