The cast of Orange Is the New Black created quite a buzz on the Primetime Emmys red carpet, so, in the spirit of the prison yard, we decided to pit them against each other in a battle royale for best dressed. Who do you think cleans up the best? 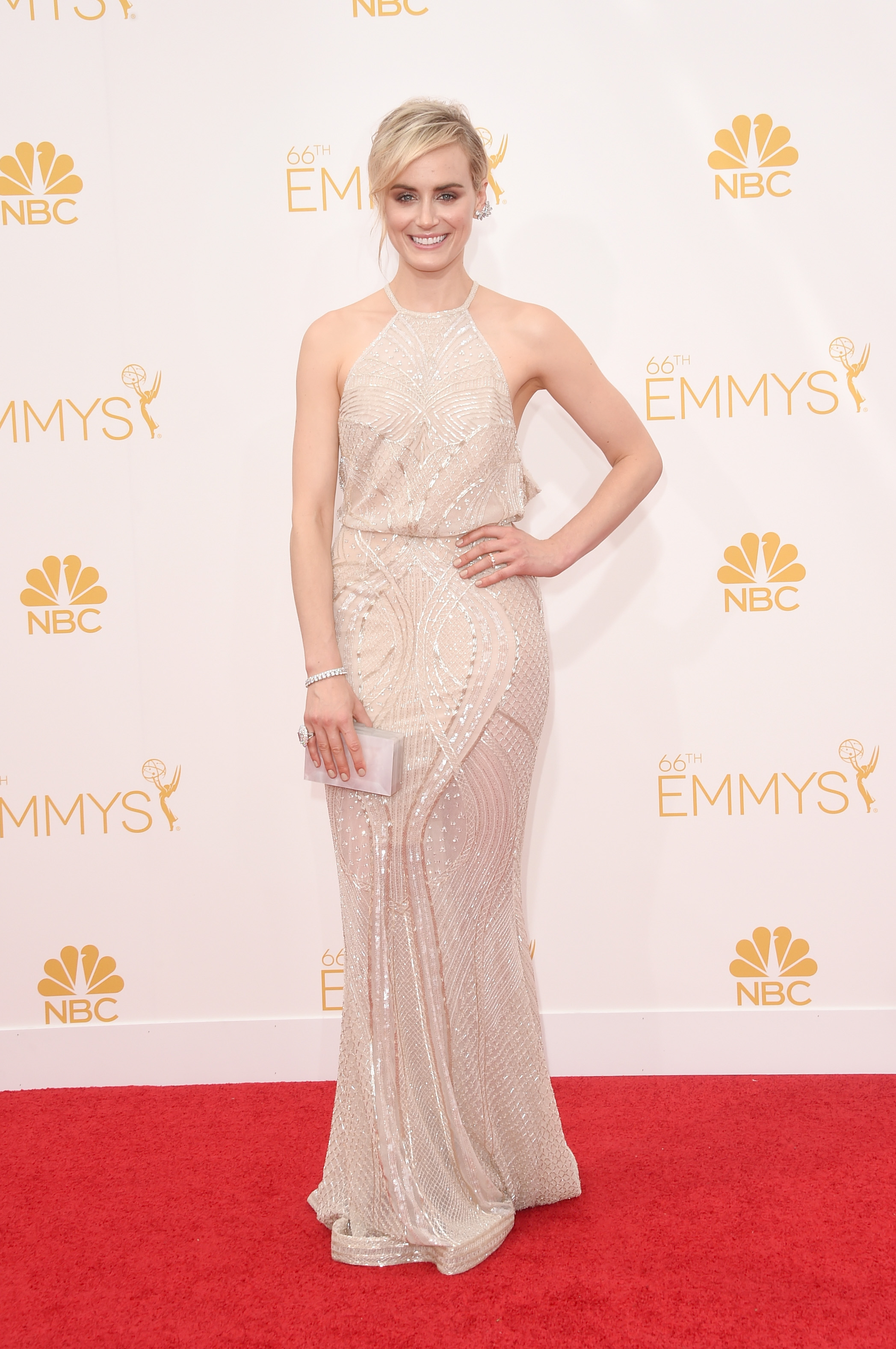 Walking the red carpet in a beaded Zuhair Murad Couture gown, Taylor Schilling said she felt “classic” in the nude-hued stunner. Not many people can pull off that kind of non-color — or an orange jumpsuit, for that matter — but Schilling positively glows.

Primetime Emmys: Melissa McCarthy tears up on the red carpet >> 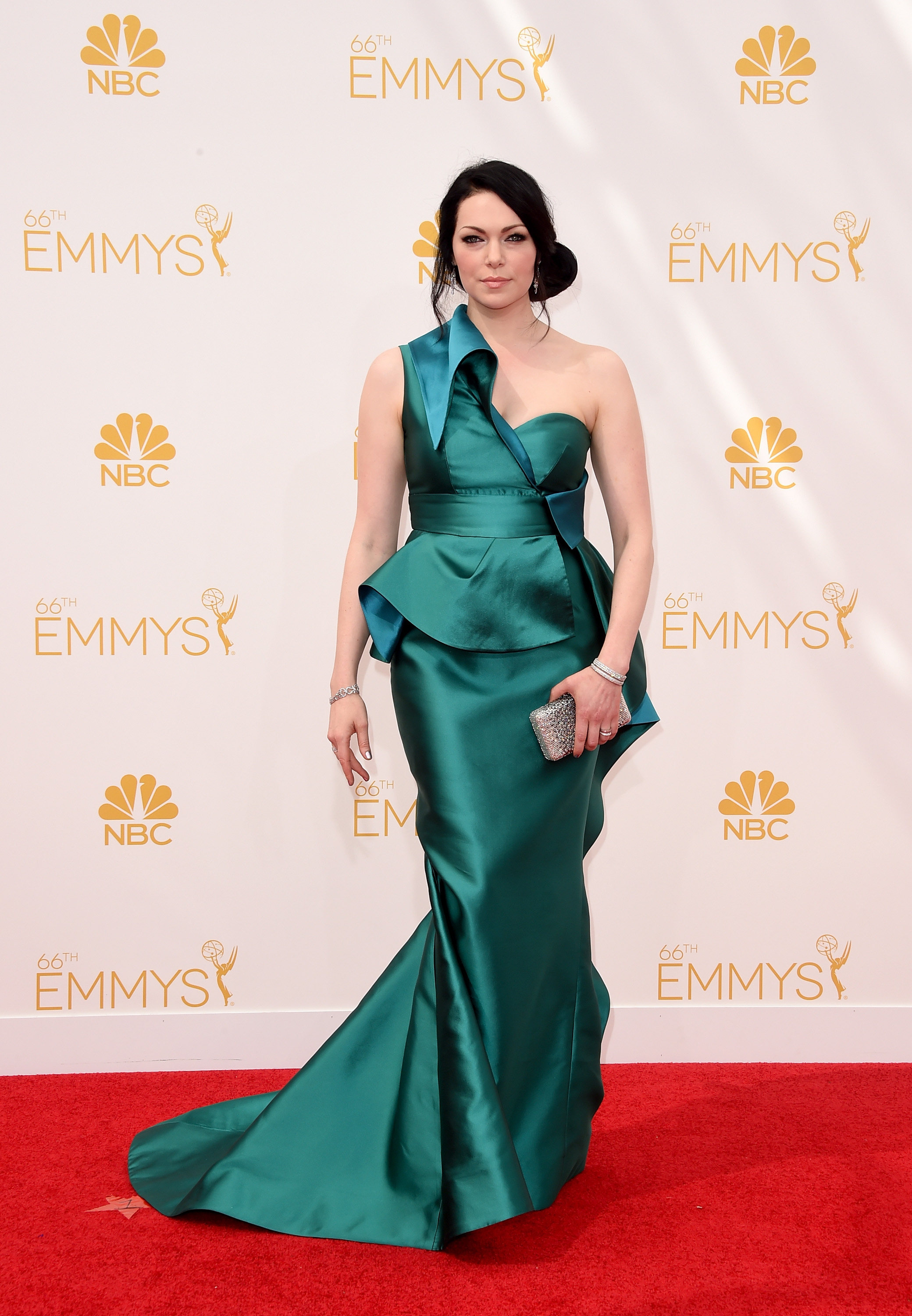 Much like their characters on the show, Schilling and Prepon sport wildly different looks. While Schilling goes subtle in a nude hue, Prepon rocks a deep jewel-toned gown with a peplum waist, sweetheart neckline and sweeping train. 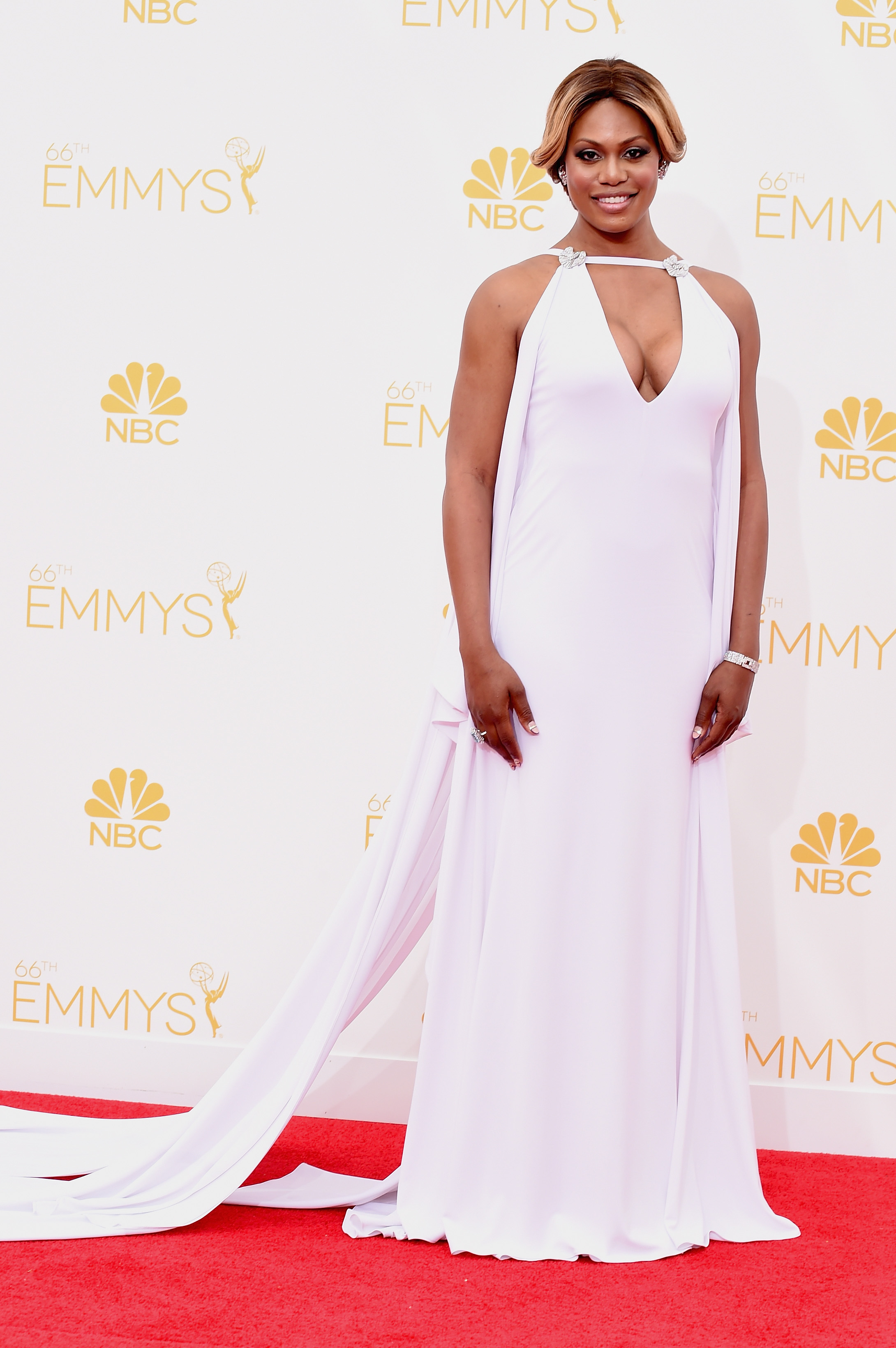 Laverne Cox looks like a goddess on the red carpet in a white-hot Marc Bouwer dress with a plunging neckline and dazzling embellishments. “I am wearing Marc Bouwer, custom Marc Bouwer,” she shared with E! News’ Giuliana Rancic. “He didn’t even sketch, he draped it on my body.” And can we say, wow! 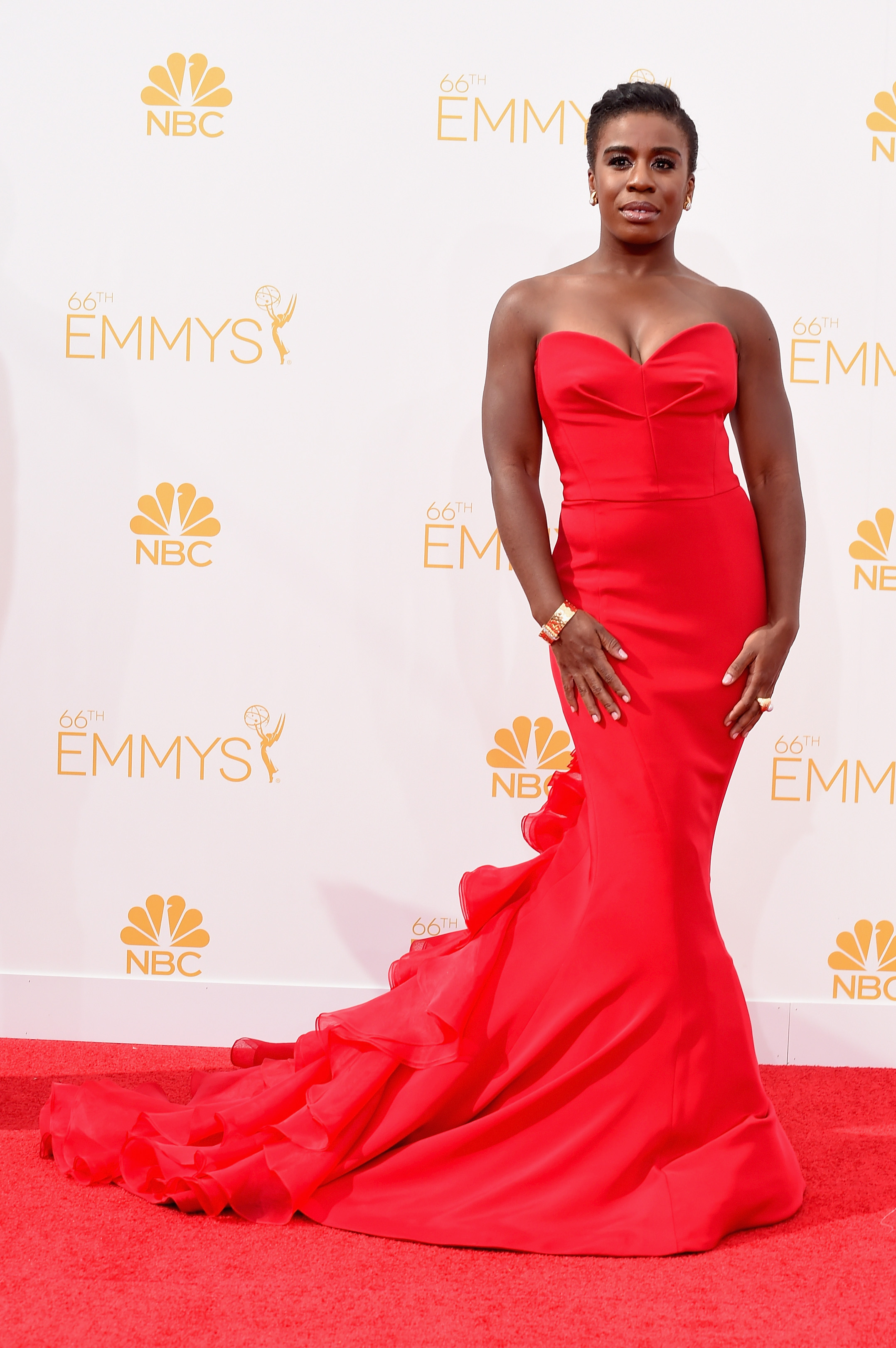 She might be called “Crazy Eyes” on Orange Is the New Black, but Uzo Aduba looks crazy good in a form-fitting strapless gown, which — despite being the same color as the red carpet — totally stood out on the Creative Arts Emmy Award-winning Aduba.

Jimmy Kimmel takes the metro to the Emmys >> 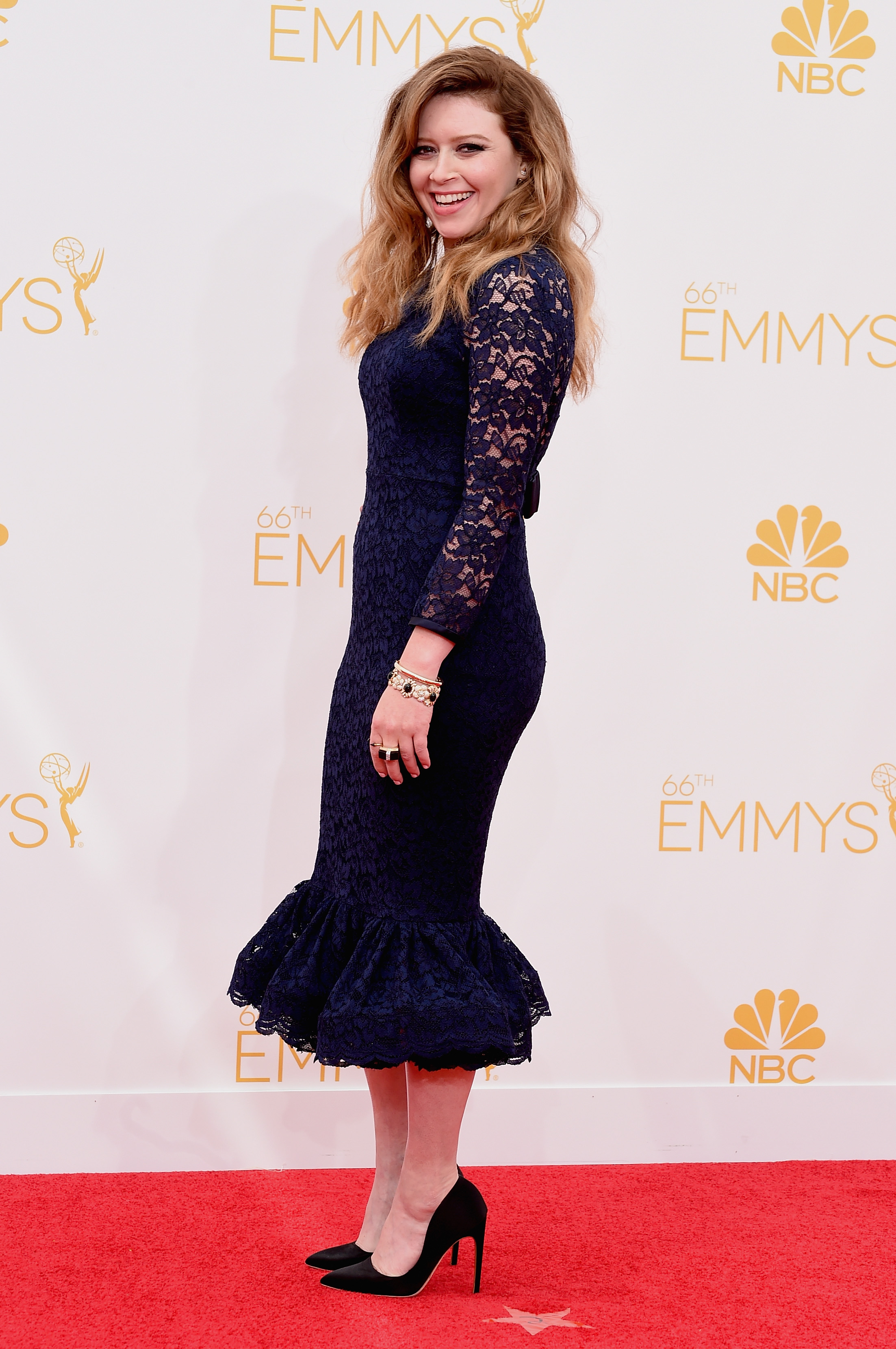 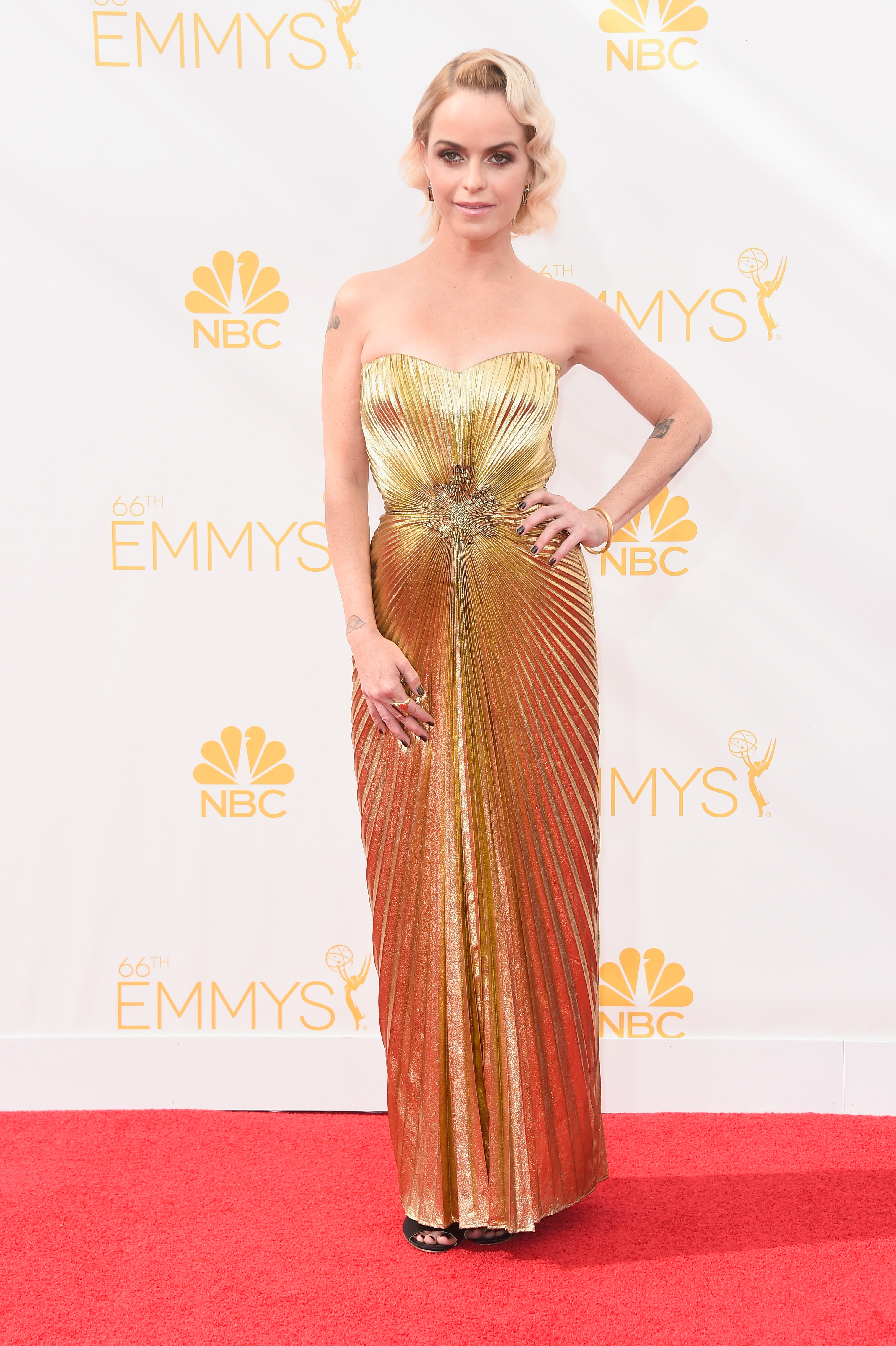 This can’t be Pennsatucky, can it? They say seeing is believing, but we’re looking and we still can’t believe it. Wearing a scene-stealing gold gown paired with Jerome C. Rousseau shoes, Manning is a far cry from her, um, not-so-classy character. 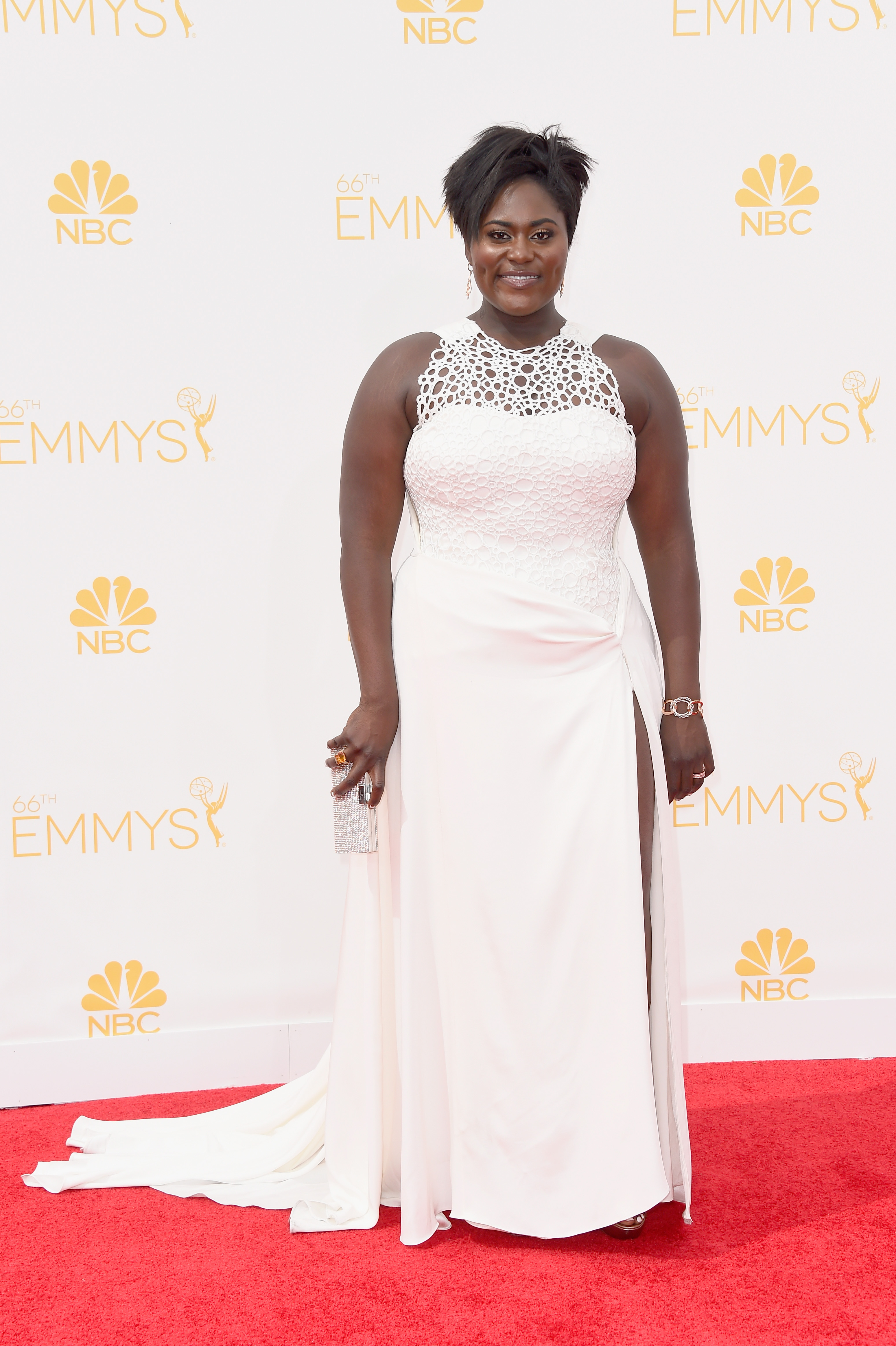 Like Cox, Brooks chose to wear white to the Emmys. Her ensemble — which includes a Nathaniel Paul gown, Open Heart earrings and a Brumani bracelet — is both figure flattering and chic, don’t you think? 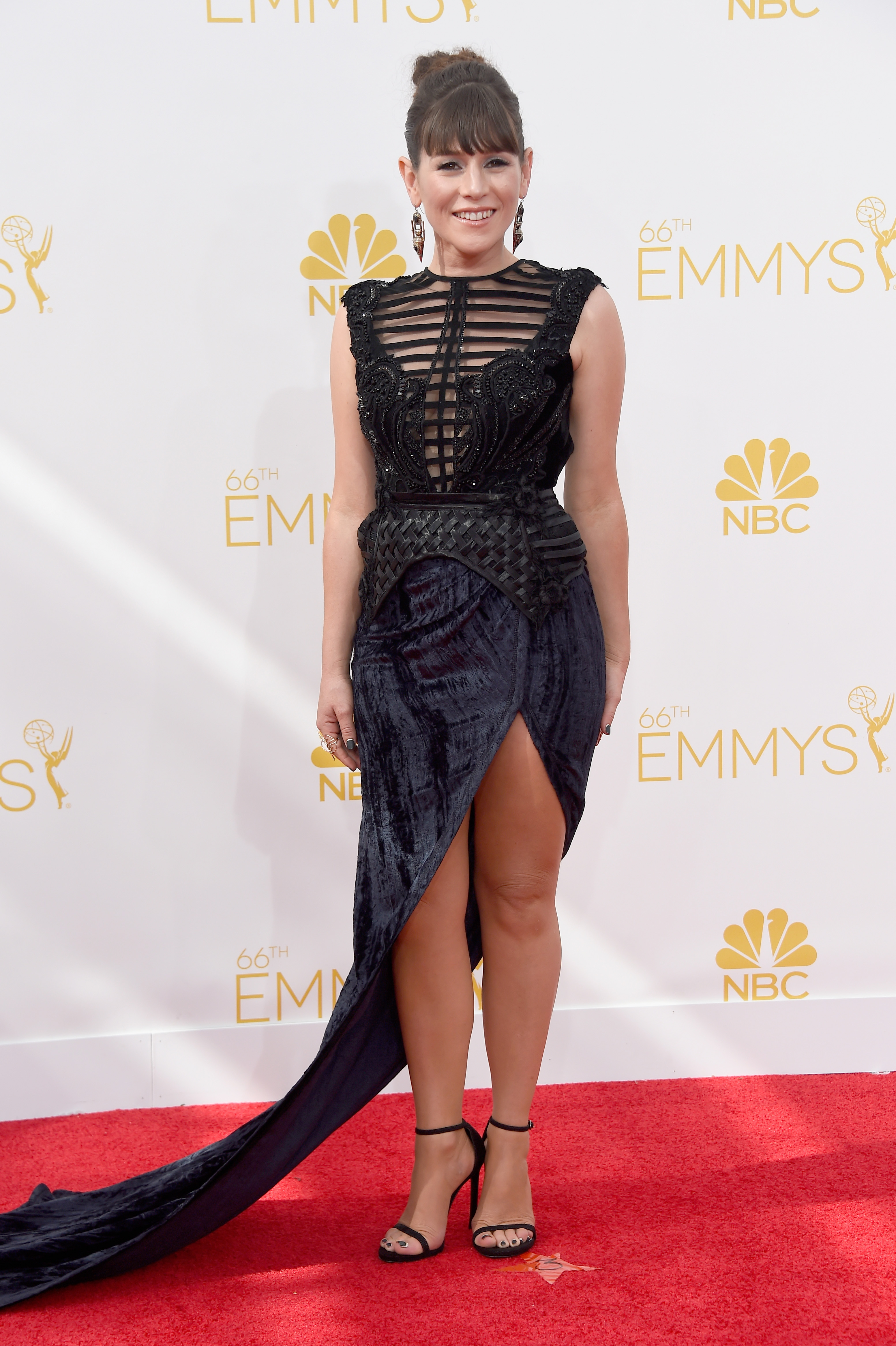 Yael Stone looks hot, y’all! The petite actress strayed from the pack of white, red and metallic, opting instead for a strappy little black number — complete with a bold split in front. Stone complemented the gown with a sophisticated updo and elegant chandeliers. 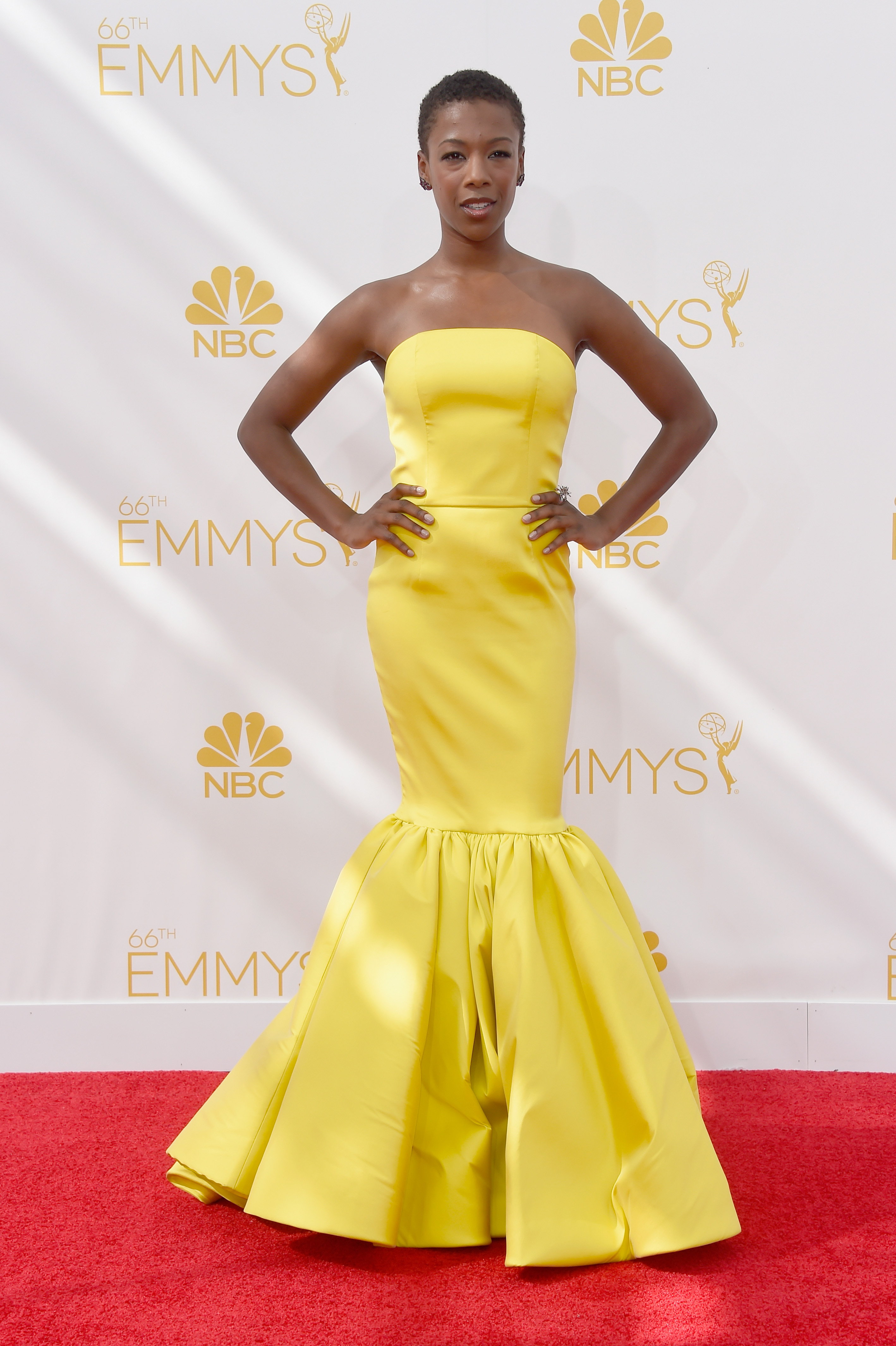 Samira Wiley goes for the wow factor on the red carpet in a canary yellow gown. She smartly skips a ton of heavy embellishments in favor of minimal accessories, allowing her dress the spotlight it deserves. We don’t think she’ll be making any hooch in that ensemble. 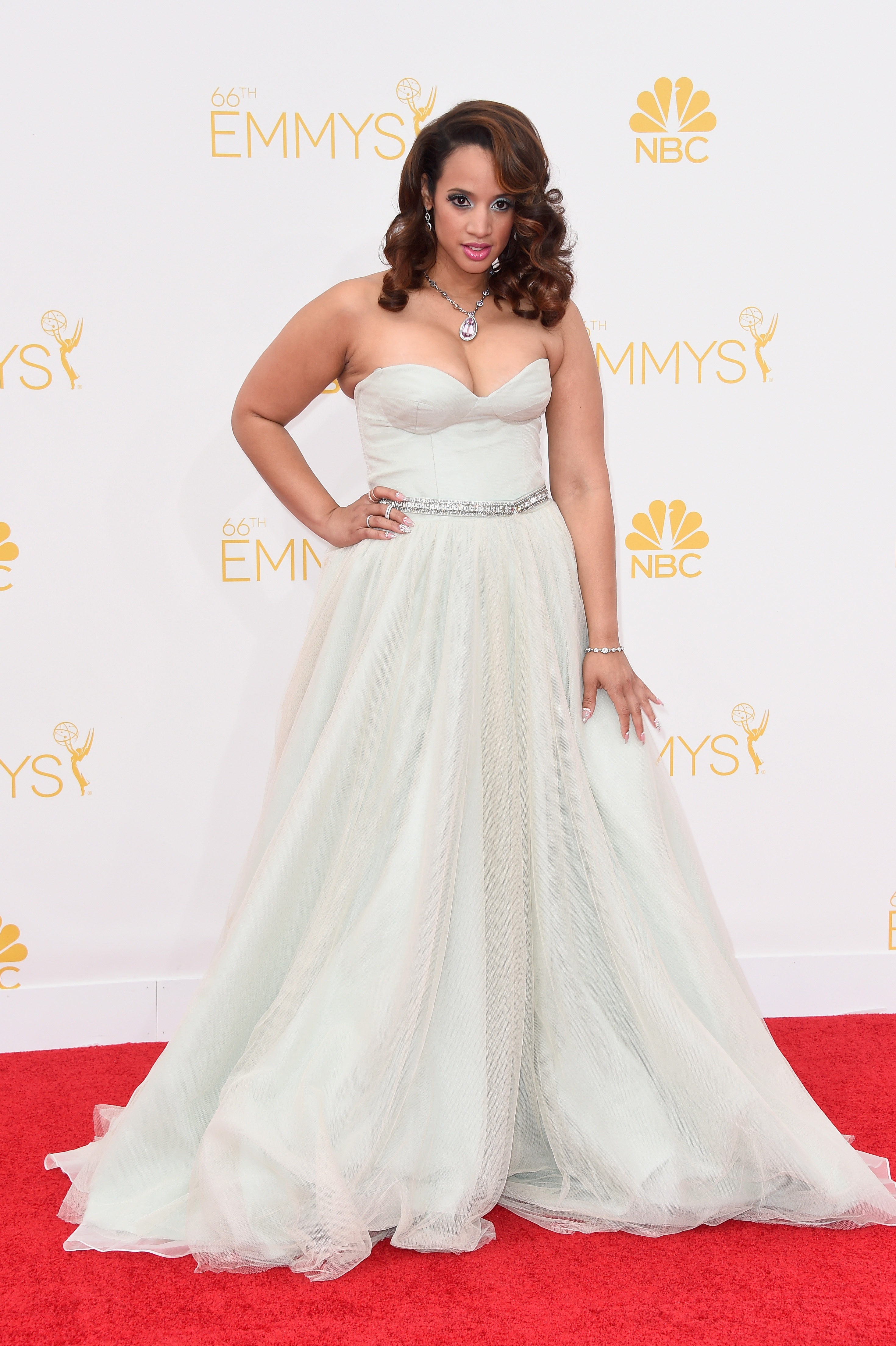 Aw, if only Bennett could see her now! In a flowy, floor-sweeping gown, Dascha Polanco is positively ethereal. Our only concern? The top appears dangerously close to a wardrobe malfunction. 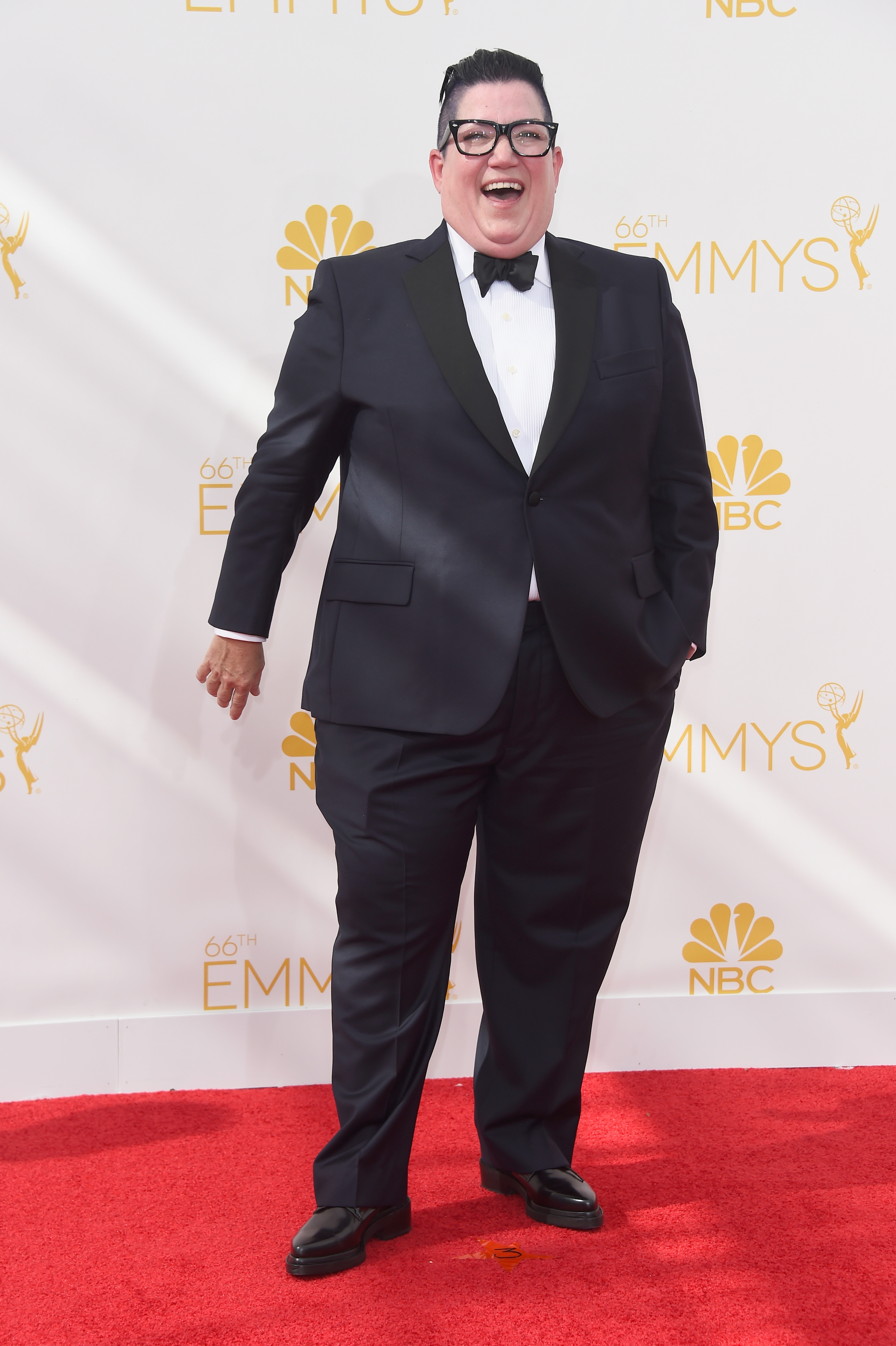 Lookin’ sharp in a suit, bow tie and thick frames, Lea DeLaria makes a keen style statement. We love that, even though she’s dressed to the nines, she still has that irreverent Big Boo vibe. She — and her character — are fabulous. 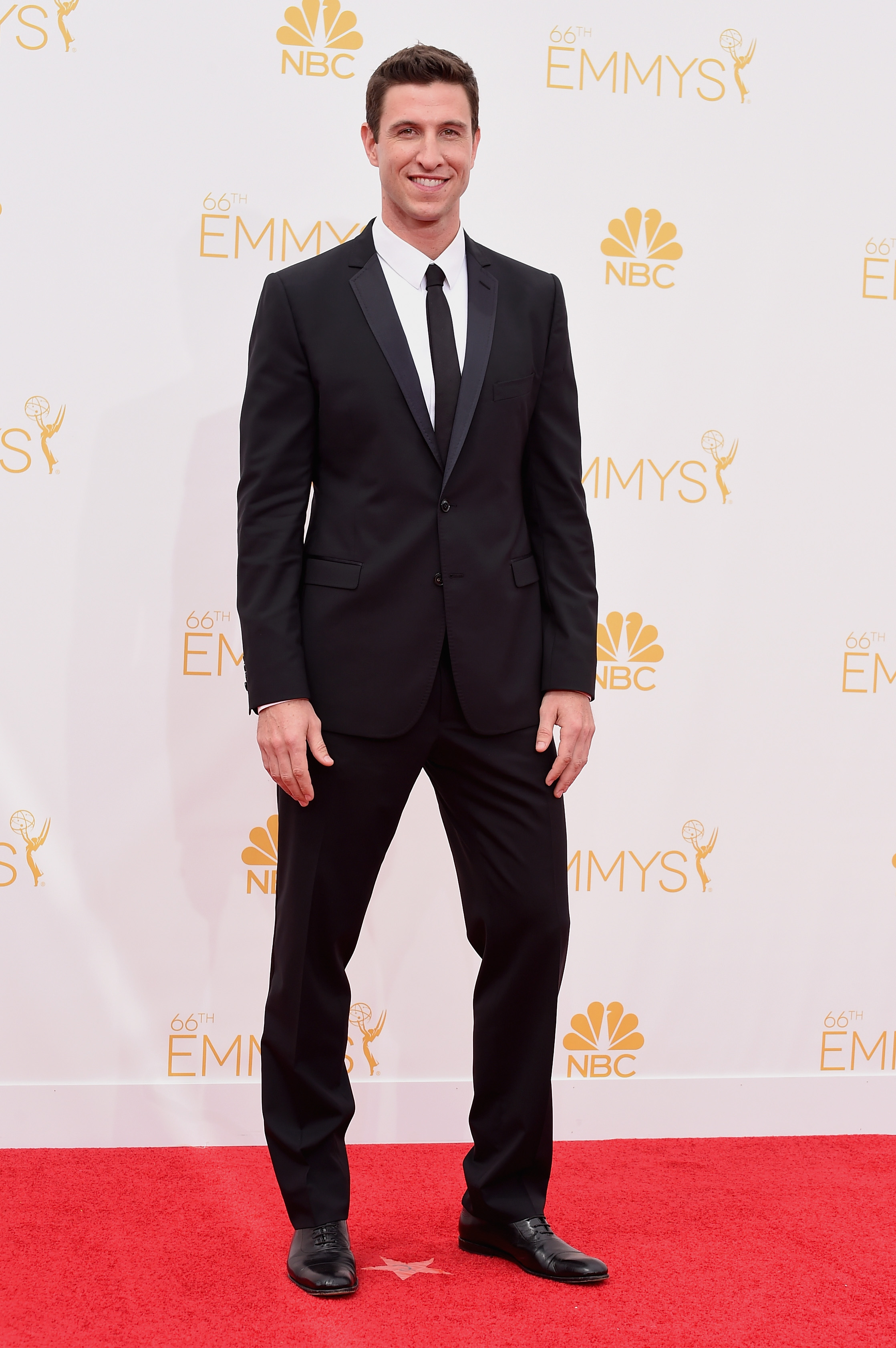 If you watch the show, your jaw is likely on the floor right now. This cannot be uncouth prison guard George Mendez or — as he is better known — Pornstache. My, my, my… he is looking so fine minus the ‘stache and plus that suit that we’re tempted to commit a couple of minor infractions.

6 hrs ago
by Tabby Kibugi