Television fans will tell you: This might be the biggest, best fall premiere season in years. We’re experiencing an onslaught of new shows and an intense increase in excitement as September looms and we try to navigate our way through DVRing as many of these new shows as possible. To help you decide what to watch, we’re sharing our picks for each month. Enjoy!

Coming soon: The adorableness of A to Z >>

Don’t let the start of school ruin your entertainment fun. There are some awesome programs being delivered straight to your living room.

Whether you’re obsessed with the great escape artist, or magic, or not is irrelevant. Houdini is the story of the man and the marriage behind the curtain. It’s equal parts dramatic and sexy. And it’s everything you need to start your September off properly.

The ultimate reality show? 15 Americans pack up and move to an isolated area where, for an entire year, they work together to create an ideal society amongst themselves. Is this Fox’s answer to the popularity of dystopian entertainment… or is it just a social experiment on television? Tune in to find out.

Not your average medical drama. RBS follows a group of kids whom fate has decided must spend the majority of their lives within the walls of a hospital’s pediatric wing. The dramedy pairs the teens and near-teens with caring but lighthearted staff eager to help the group make the best life possible, well aware that some of those lives might not last beyond adolescence. Yes, there will be depressing moments. But expect plenty of humor as well.

How to Get Away with Murder, Sept. 25

Should anyone ever teach a class called “How to get away with murder?” Survey says: terrible idea. The proof lies in this new ABC show about the professor teaching this class and the four law students who may or may not have taken her advice. Will her lessons actually help anyone escape imprisonment… or will the professor pay the ultimate price for what she taught her students?

Incest is hot, right? Game of Thrones has explored the subject with great success, and now MTV is doing the same with Happyland. Except, instead of a story revolving around violence and an iron throne, Happyland follows the lives of the people working at a theme park. Not quite carnies… but not necessarily the best representation of our society, either.

Interested? Right click and select “view image” on the calendar below to see a larger, printer-friendly version of the full calendar. 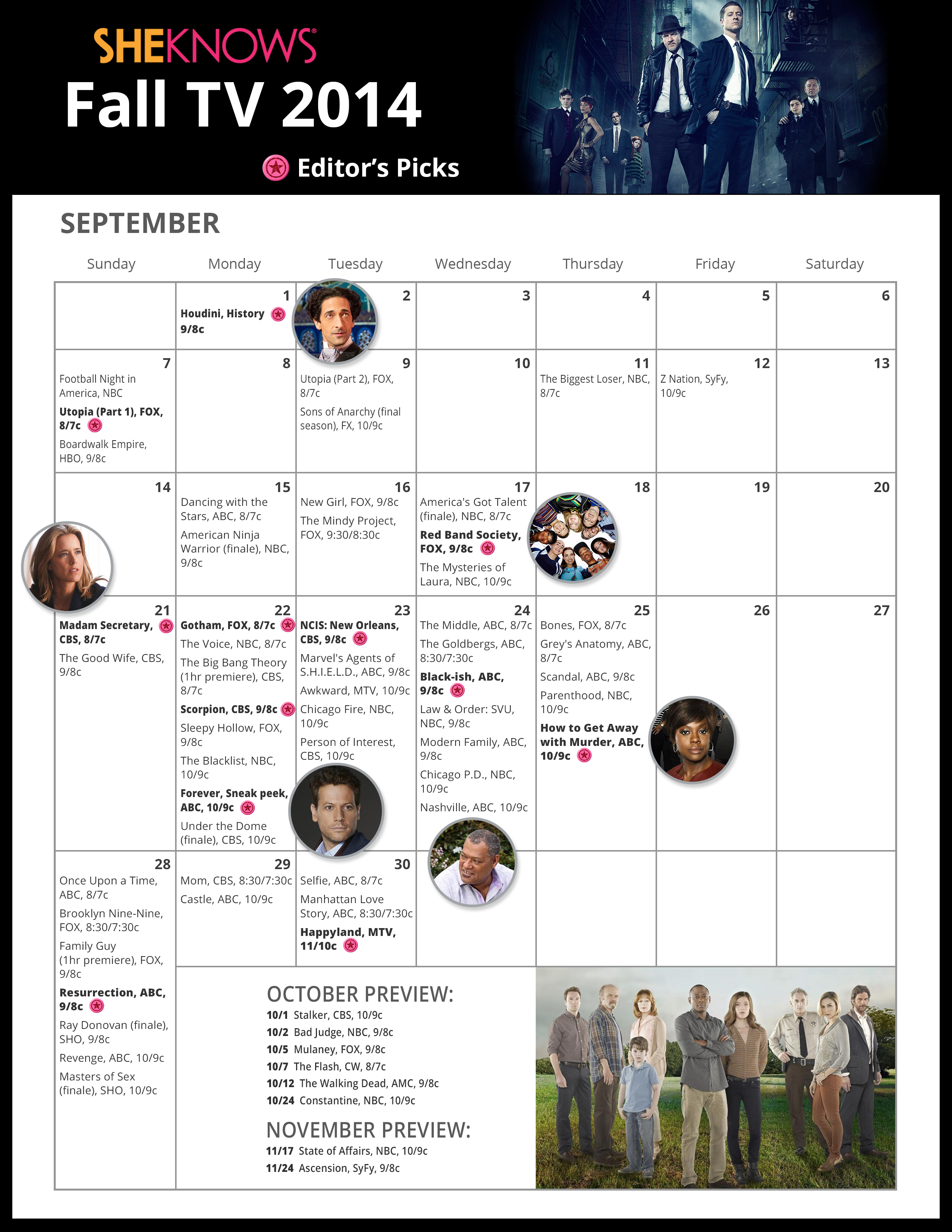 After the uproar and success of the UK’s Broadchurch, we Americans had to go and get our own. Other than a new title, Gracepoint is very much the same show as Broadchurch — same premise and, most importantly, same massive star leading the show: The Doctor David Tennant. You know we’ll tune in.

Catching up with Flash and the gang at SDCC >>

If the epic tease of The Flash we got during Arrow is any tell, The CW’s newest superhero, The Flash, is bound to rock. We can’t wait to join him on this adventure and witness his reaction as he discovers each “new” super ability he’s acquired. Should be good and slightly more upbeat than Arrow.

After six long years of near-perfect dating life, it’s time for Annie and Jake to get engaged. But when Annie’s annoyance ruins Jake’s first attempt, they decide not to try again until they can score the most perfect proposal. How long will it take them to get it right?

This big Boston family cares about one thing only: sports. When the youngest son, completely uninterested in sports, is selected to take over his father’s football coaching legacy, the rest of the McCarthys rise up in an uproar. There’s no way this ends without hurt feelings. 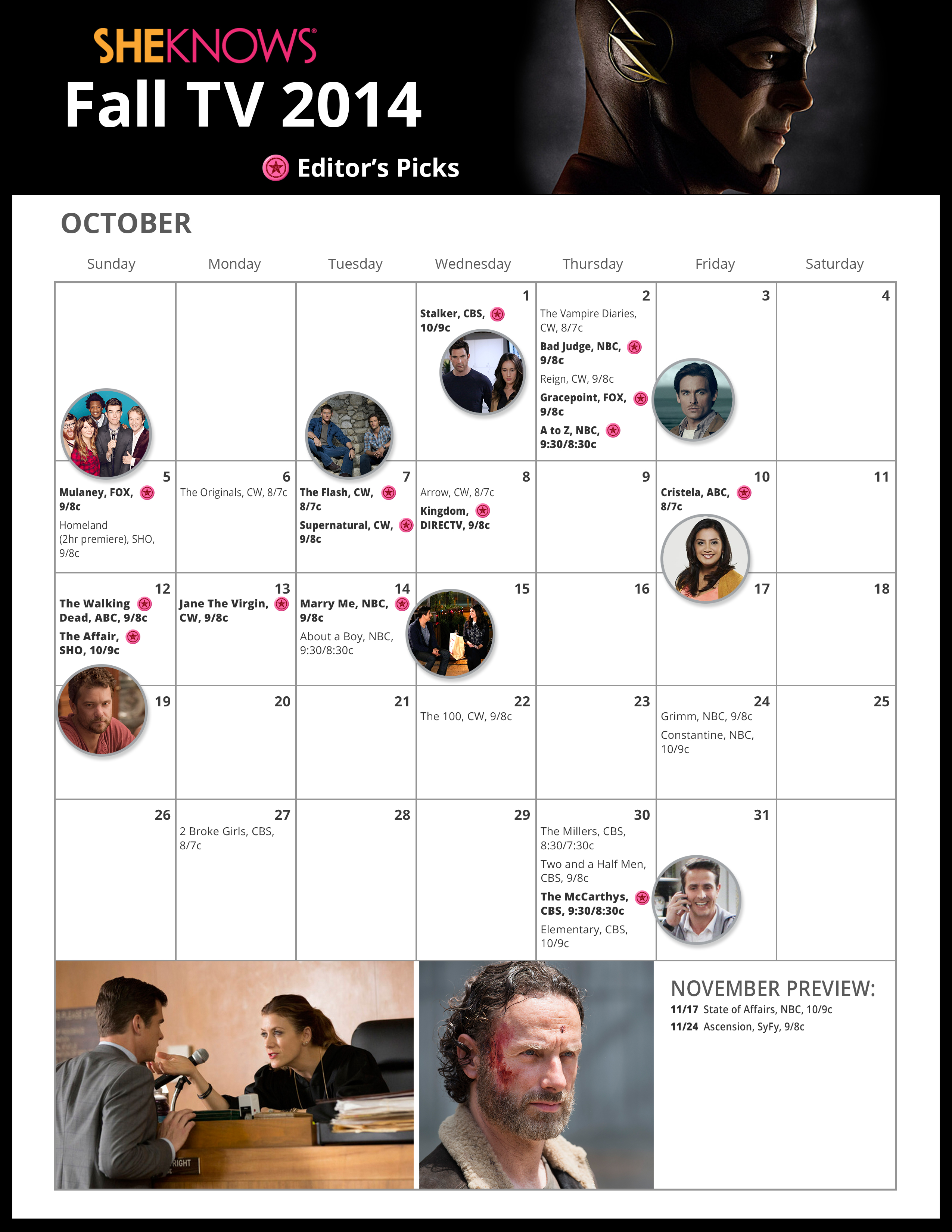