Welcome back to Sin City, the misogynistic, violent, green-screened hellhole that hasn’t changed since we first visited in 2005. OK, so this sequel is in 3D, but the CGI sets are so flat and colorless, we have no idea why they’d spend the extra lettuce. If you’re keen on broads, whores and sluts, however, put those 3D glasses over your peepers and take a gander at the most un-female-friendly picture show of the year.

To be clear, we understand that Sin City: A Dame to Kill For is a movie made for dudes. Probably dudes ages 14 to 29, to be specific. At my screening, a 20-something man was sitting next to me. I made sure to monitor his reactions to the film since I figured he was the target audience.

Every time a naked lady appeared on the screen, the young man would nervously bite his nails. By the end of the film, all 10 of his fingers had been chewed down to stumps. 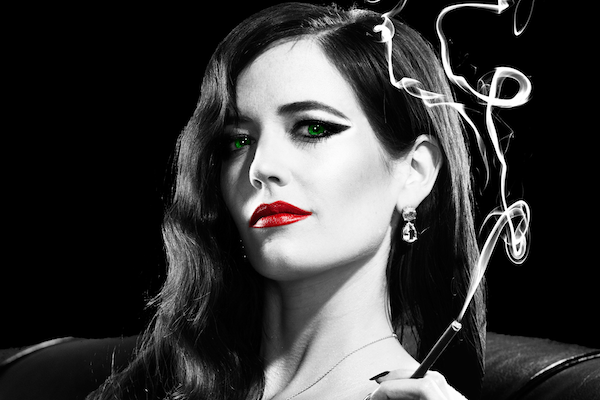 So yes, there’s a lot of nudity, particularly when it comes to Eva Green. She’s the movie’s dame to kill for, and rightfully so. She’s drop-dead gorgeous in her clothes or out of them, and she’s mostly out of them. But her character Ava never progresses beyond that sex kitten whose purr is as dangerous as her sharp claws. We never know what she wants, only that every man in Sin City, married or single, dead or alive, sober or on the sauce, wants her.

A Million Ways to Die in the West: Check your feminist viewpoints at the counter >>

What’s even stranger, and possibly more disturbing, is after they have sex, they are suddenly in the corner of the wood-paneled room, both still naked, but Dwight is kneeling, facing her. Ava cradles his head in her arms, invoking the iconic image of Madonna and Child. Her plump breasts rest near his mouth as if she’s about to feed him. So now she’s his mother figure, too? The Madonna-whore complex is sooo 20th century.

Then there’s Nancy (Jessica Alba), an exotic dancer who’s seriously pining away for her one true love, John Hartigan (Bruce Willis). She’s another beautiful woman, but why does her grief lead her to take a shard of glass and slice open her face? I can only guess she’s acting out her sadness, but it’s an awful act of self-mutilation I hope forever stays in Sin City.

Gail (Rosario Dawson) is the leader of the Old Town prostitutes and probably the most straightforward of the women in the movie. She has an arsenal of weapons to protect herself from the men who pay her for sex, yet she’s willing to risk her life for Dwight. Again, however, she’s another worn-out stereotype, this time, the hooker with a heart of gold. 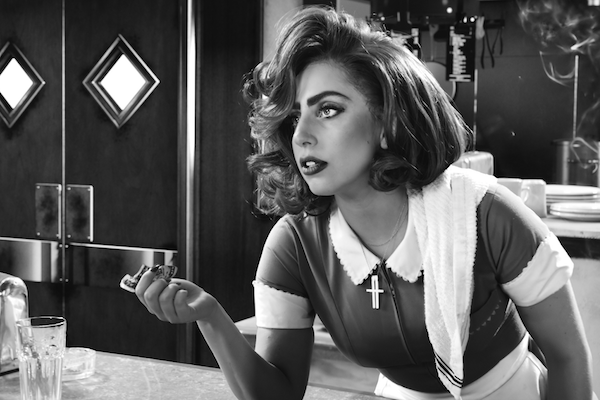 Probably the best scene in the film comes when Johnny, (Joseph Gordon-Levitt) a broke and broken gambler, addicted to lady luck, enters a diner for a glass of water. Lady Gaga actually makes a surprise cameo as Bertha, a waitress with a New York attitude who takes pity on him. It’s a short scene, but the pop star is as real and down-to-earth as I’ve ever seen her. As a simple waitress, she’s probably the most interesting character in the film.

If only Frank Miller and Robert Rodriguez could have trusted that even in film noir, real women, not one-dimensional vixens, make for really sexy, entertaining characters, we might have had a decent movie.

Sin City: A Dame to Kill For opens in theaters today.

6 hrs ago
by Tabby Kibugi