We always knew Anderson Cooper was a superhero, right? No? OK, well he’s still not. But he is set to come alive on the pages of Marvel’s newest Black Widow comic book. But what’s CNN’s silver fox up to? Oh, you know, just a little investigative reporting.

Marvel announced this week that the upcoming issue of the Black Widow comic book will be extra special because it will star Cooper as a quasi-narrator of the story. Of all the Avengers, Black Widow is the one we know the least about and in Black Widow #12, Cooper hopes to change that. Sure, she seems like an American hero, but after years of being undercover, do her allegiances still lie in the States? The newly sketched Cooper will lead an investigation into Black Widow’s past and, ultimately, uncover the truth about her present self. 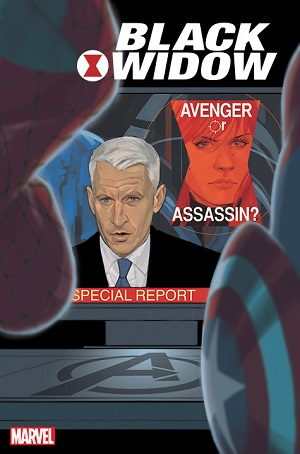 “It’s Anderson doing what he does best: looking for the truth and reporting on events,” shared Nathan Edmondson, series writer, in an interview with Marvel.com.

“We imagine that in Black Widow’s world, as would be the case with many other Avengers, things she does can’t be ignored by the media and all it takes is somebody who knows how to ask the right questions to make her world very uncomfortable for her but in a way that is perhaps not unjust.”

The results could be pretty consequential for Black Widow, too. Sure, we’ll be reading the comic and, of course, in the Marvel Universe plenty of people will be watching Cooper’s “on-air” report.

From the looks of the cover, though, it seems like Black Widow’s own team will also be tuning in and learning more about their co-Avenger. That appears to be Spider-Man’s shoulder and is most definitely Captain America’s shield. How much do the boys already know of Black Widow’s past? Will Cooper uncover something that could make Cap and the gang put down their lady friend?

This Cooper-led issue, written by Edmondson and drawn up by Phil Noto, goes on sale in November 2014. You know we’ll dive head first into it. Until then, we’ll just keep watching Anderson Cooper 360.

For more TV, music and book news, sign up for our newsletter >>

28 mins ago
by Sara Kitnick