Planning an Emmy party? Or just want to find a way to make watching them alone a lot more interesting? Use our handy-dandy scorecard to create your very own Primetime Emmys drinking game.

It’s that time of year again, TV fans. The Primetime Emmy Awards are coming up on Monday, Aug. 25 on NBC and we’ve got the perfect way to make the ceremony a lot more interesting.

As usual, the Emmy nominations didn’t have a lot of surprises. Shows like Netflix’s Orange Is the New Black and AMC’s final season of Breaking Bad ended up with a few nominations. Seth Meyers has also been chosen as this year’s host, which could spell great things for the broadcast.

Emmy parties are all the rage across the country — with some people going so far as to host black-tie affairs, others content to serve some popcorn and champagne while still others choose to enjoy the ceremony alone.

No matter how you decide to watch the ceremony, our scorecard could make your evening tons of fun. Turn it into an easy Primetime Emmys drinking game by assigning a number of sips to each show/person nominated in a category. Whoever wins, you have to drink the amount dictated on your card. 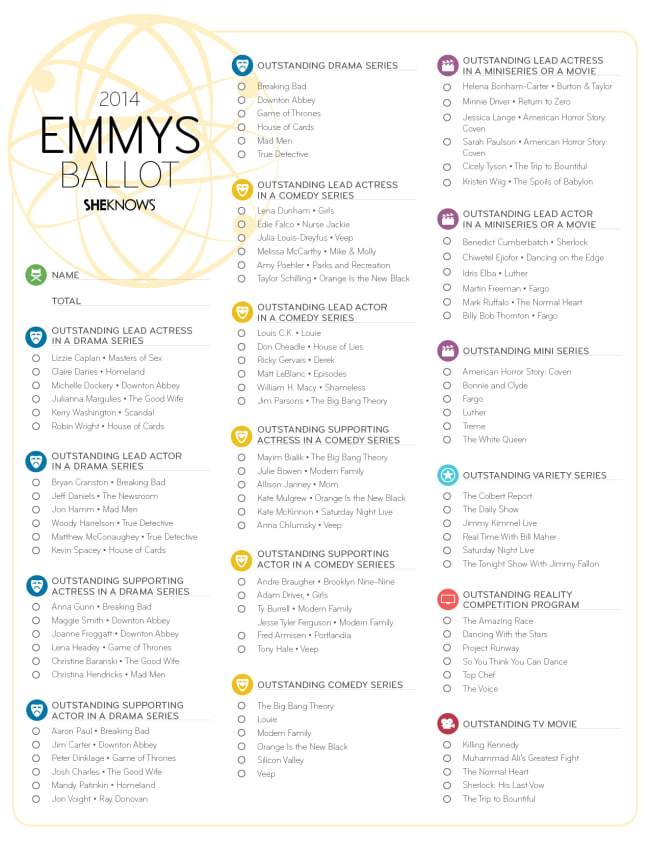 If you’re throwing a big soiree, hand out the cards before the show begins and let everyone vote together on what they think each nominated person/show is worth. Play the odds by assigning large amounts of sips to those nominees you think have very little chance of winning. It’s a surefire way to make the reading of each winner a lot more exciting.

Or you could even let each individual person assign their own sips to nominees as a way to make a bet. If you think your pick will win the category, give them the fewest sips and assign more sips to those nominees picked by everyone else. Then you’ll all get to see who has to drink the most as each award is given out.

Not interested in drinking alcohol? Not a problem. It’s just as easy to play using soda or any other beverage you prefer.