Could Ant-Man be our new favorite superhero? With a cast that includes Paul Rudd, Michael Douglas, John Slattery and rapper T.I., we’re thinking Ant-Man could just rock the box office next summer and knock Iron Man down a notch.

Ant-Man began production in San Francisco yesterday, and we get to share the first photographic still. Paul Rudd will play the lead character, a superhero inspired by the picnic invader, the ant.

Ants are descended from wasp-like ancestors and are known for their elbowed antennae. They are huge pests when they get into your kitchen, but their ability to form colonies and work together is quite astonishing.

In this photo, Rudd as Scott Lang, aka Ant-Man, stands alone, wearing a hoodie under his jean jacket. He appears to have a bandage on his right eyebrow, indicating he’s possibly been in a fight. The Ford van from the 1970s makes it seem that our insect-inspired superhero is down on his luck financially. The question we really want answered, however, is: What is in that black bag he’s holding. Could it be someone’s head? Is Ant-Man going to discard it into the ocean beneath the Golden Gate Bridge?

To us, Rudd as Lang looks more like a serial killer in this photo. If we ran into him on a San Franciscan street, we’d run in the other direction. So what does he look like when he’s all decked out in Ant-Man garb? Something like this: 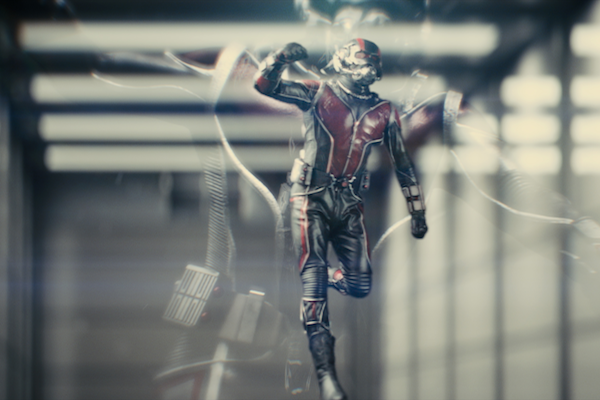 Red and black seem to be Ant-Man’s signature colors. In the film, Lang is a former criminal and thief who comes under the influence Dr. Hank Pym (Michael Douglas), a mad scientist/inventor who creates a device that can shrink a person down to the size of an ant while giving them superhuman strength.

And So It Goes‘ Michael Douglas on Diane Keaton: “I’ve always admired her from afar” >>

Not everyone envisions using this technology for good, however. Pym’s protégé Darren Cross (Corey Stoll) has his own superhero identity as Yellowjacket, and is planning to use Pym’s technology for his own benefit.

Rudd recently told USA Today, “The way technology has advanced just in the last few years, picturing this world, what they can do with this kind of story line and character, I thought this could be something that could be very strange and hasn’t been seen before.”