Best known for playing her Guidette-self in the reality show Jersey Shore, Jenni Farley steps into two new roles as mom and movie producer. We sat down with the queen of reality royalty to find out more about the new movie Jersey Shore Massacre. 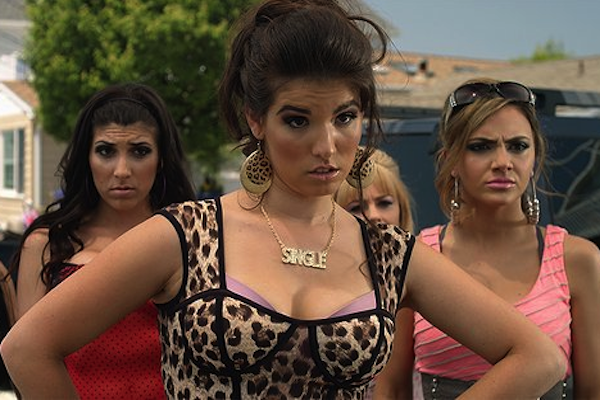 So much has changed for Jenni Farley. Seems like it was just yesterday that the buxom beauty was beating up the beat, getting drunk on Ron-Ron juice and pulling out Guidette’s weaves.

Now, the girl we know as JWoww is mother to a baby girl named Meilani, is engaged to Roger Mathews, the baby-daddy, and producing a new movie she thinks fans of Jersey Shore will adore.

“A lot of fans really want to see a Jersey Shore reunion and I can’t promise that. But what I can deliver is Jersey Shore Massacre, which is all about going down to the shore, having a good time, the stupid remarks and the lightheartedness. It just totally reminds me, from beginning to end, of my roommates. The only difference is that they all get killed,” Farley said with a hearty laugh.

We asked Farley about getting behind the camera for the first time as a producer.

“My dream is to be a successful producer and to sell TV shows,” she said. She currently has two in the works at different networks but couldn’t reveal any more than that. “I want to create really fun movies and shows and have people really love or hate my work. I don’t mind if they hate my work, because I remember Jersey Shore was hated at one time and it broke all records.”

We loved Farley in The Three Stooges and asked her if she’ll be appearing in any more movies. She said she loves acting, particularly playing comedic characters, but she’s terrified of the audition process. “I chicken out and I can’t do it. I have the worst stage fright ever!

“When I get casting calls, and I have to read lines, I freak out. I can have a camera in my face all day and be myself, but the moment you make me stand on stage and present awards, my knees shake. Nicole knows because she’s always with me. I get dry mouth, and I think I’m going to pass out on stage.” 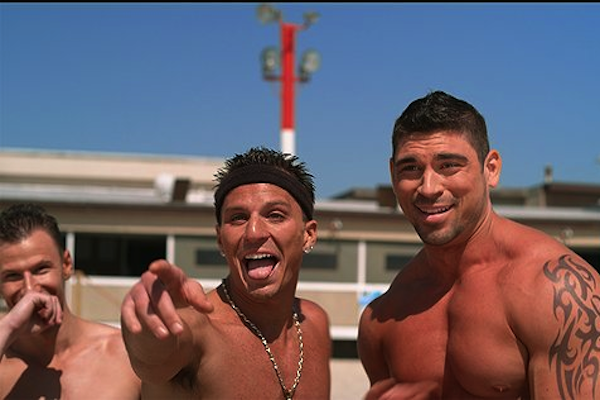 Of course, we had to ask Farley about her baby girl, Meilani. “She’s my everything. She’s 1 month old, which I can’t get over. She’s perfect,” Farley said.

We also asked the new mom about giving birth, which turned out to be quite the intense experience. “I forget the technical term for it, but it’s called rapid delivery. The only thing for me that was terrible was my epidural wore off before they could administer the second one.

“I went from 4 to 10 centimeters in less than an hour and she was out in three pushes. From the time I was 7 centimeters to the time she was out was nine minutes, so the second epidural had no time to kick in. I felt that whole thing and let me tell you, that’s something I never want to experience again.”

Yikes! That doesn’t sound fun. She admits her parts “down there” are recovering, thankfully. “Oh, my god! I had stitches, I tore like a mother, but I think my lady business is fine, but I still don’t have enough balls to look down there, yet. I’m going to wait another week.”

Mathews, Farley’s fiancé and father of Meilani, is reportedly in love with being a father. “He’s honestly, the best dad. He’s too good because now we have to fight over who gets her more.”

As for naming her daughter, Farley said she was inspired by surfer and shark attack survivor, Bethany Hamilton. “Bethany is literally one of the most positive people I’ve ever come across. Her middle name is Meilani, and it means heavenly flower in Hawaiian. I literally wrote it down in my phone, three years ago, I thought that’s going to be my daughter’s name if I ever have a daughter and here she is.”

What a sweet story!

Jersey Shore Massacre releases in theaters on Friday, Aug. 22, and on DVD, Aug. 25.