We love Ashley Rickards from MTV’s Awkward. Now, she’s starring in a paranormally awkward new horror movie called At the Devil’s Door. We sat down with the actress to hear the details of her own real-life ghostly experiences. 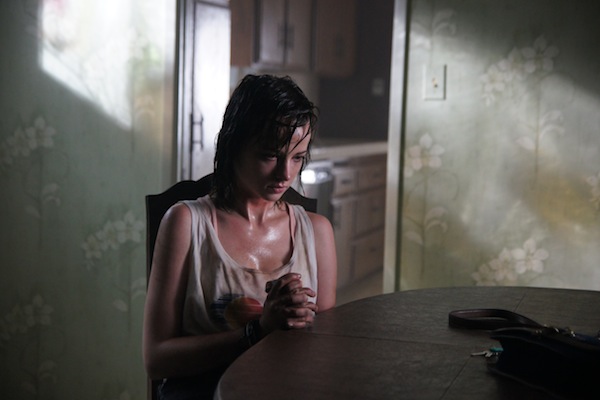 Awkward star Ashley Rickards told us she’s a huge fan of the horror genre and that she’s been watching horror movies since she was a little girl. “My first horror movie was Pet Cemetery when I was 7,” she says.

We asked the Mensa member to tell us about her character, who is simply credited as “Girl.”

“She’s just your average teenager who, unfortunately, has a not-so-average experience on vacation in California. She goes from being a non-believer in [the demonic] to coming to the realization that not only is it real, but it’s inside of her.”

More frighteningly, her character sells her soul for a mere $500. We can only let you guess how her deal with the devil works out.

We asked the 22-year-old actress if anything creepy happened while shooting this movie.

“We shot the opening scenes in a real place called Devil’s Pit in California, so that was number one creepy.”

Early in the film, her character is asked to reach inside a black bucket with a slit in it to pull out a mysterious object.

“That box was so creepy in real life. I said, ‘Nick [McCarthy, the director], I’m not putting my hand in there until you open it up and show me it has a bottom.'”

But does Rickards believe in paranormal activity in real life? “Absolutely. There’s legitimacy to the paranormal. I think going back to anything we can’t explain with science, we sort of put into that ether zone of what’s real and what’s not until we can explain it. But even with technology, there are things we can’t explain. And we aren’t meant to; some things are meant to be mysterious.”

Rickards claims she’s even had a paranormal experience of her own. “I used to summer in Maine in this house that was over 150 years old. I would come to find out later that a woman died in the bedroom where I would sleep. Really weird things happened. Electronics would plug themselves in even after I unplugged them. I would watch them plug themselves back in.”

Yikes! Rickards went on to say, “It was harmless, but nonetheless, it was super f***ing creepy. My mom ended up telling me that a woman died in the house from cancer and her husband got remarried six months after her death. Apparently, she haunted the s*** out of that new wife. I think that’s hilarious. She was definitely a nice ghost, but I think it’s great that humor goes beyond the grave.”

In addition to making this movie, she’s also written a self-help book called Get Your S*** Together, which she describes as “a no-bulls*** guide to life.”

We asked her what inspired her to write the book and she said that, ultimately, she wants to help people.

“I tend to think I have my head on straight. I want to help other people feel that way, especially young girls. It’s a funny book, borderline TMI, and I don’t shy away from the hard subjects.

“True self-acceptance only comes from a very deep place within. You can only do so many five-minute makeovers before you realize they don’t work. At the end of the day, being yourself and being OK with that and nourishing your quirks, rather than trying to cover them, is the key to being happy.”

We like that advice. Get Your S*** Together will be available in the spring of next year. At the Devil’s Door opens in theaters Sept. 12.