Avril Lavigne got an upgrade on her 14-carat engagement ring with a brand-new 17-carat rock from Chad Kroeger for their one-year wedding anniversary.

The Canadian rocker showed off her new present on Twitter with a photo of herself, Kroeger and the huge sparkler with a caption that read, “I still can’t believe my 1 year anniversary gift. 17 carat emerald cut. Wow. I love my hubby.” 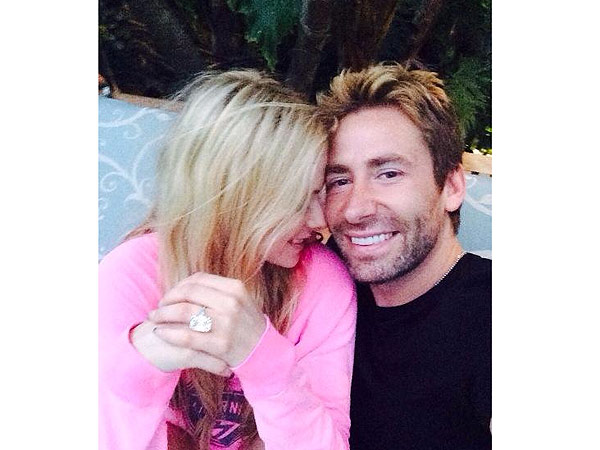 The ring, which is super-massive, is set on a platinum band and complements the pear-shaped diamond Kroeger proposed to Lavigne with. But this new 17-carat beauty is not the biggest the singer got from her husband, People magazine reported. On their wedding day, the bride was given a 20-carat emerald ring.

Lavigne and Kroeger famously tied the knot at the Château de la Napoule in the French Riviera after an 11-month engagement. The “Girlfriend” singer wore a black lace Monique Lhuillier gown with a bouquet made of black roses.

The lovebirds first got together while recording their collaborating album, not long after Lavigne divorced her first husband, Sum 41 singer Deryck Whibley, in 2010. The two have been happy ever since and often speak about their close relationship.

Is Chad Kroeger’s suckiness rubbing off on Avril Lavigne? >>

Kroeger added that they don’t go out drinking without each other to avoid any potential bad situations. “This is something we cherish and protect.”

After nearly two years together, Lavigne and Kroeger have expressed interest in having children together someday, but for now they are too busy working. Lavigne is set to kick off her Japan concert at Zepp Nagoya Aug. 13, which will be her first in that country since her controversial Japanese-themed Hello Kitty music video that was deemed racist by many fans.

Meanwhile, Kroeger and his band Nickelback are in the stages of planning their upcoming 2015 tour.