While the rest of the interwebz has been abuzz about Hilary Duff’s first music video in six years, we’re — how shall we say? — a bit nonplussed. It’s not that we don’t think Duff is cute as a button (’cause she is), but her “Chasing the Sun” gives us déjà vu. Here’s why we feel her song circa now feels a little too much like Sheryl Crow’s “Soak Up the Sun” circa 2002.

Well, duh, right? Aside from the obvious similarity of the titles “Chasing the Sun” and “Soak Up the Sun,” the lyrical similarities in Duff’s song and Sheryl Crow’s fun summer anthem run pretty deep.

First, there’s the notion that time is of the essence. Duff starts off her song singing — nay, rhyming Dr. Seuss-style, “Why am I in such a hurry/Always getting up too early/So fast everything is blurry” — about ticking clocks. It’s a theme she sticks with, later realizing, “On the pursuit of happiness/I realized more is less.”

Of course, if that line feels familiar to you, it’s probably because it mirrors one of the most memorable lines in Crow’s “Soak Up the Sun”: “It’s not having what you want/it’s wanting what you’ve got.” The idea is the same, sistah.

Then, naturally, there’s the matter of the nearly matching choruses. In “Chasing the Sun,” Duff sings, “I’m chasing the sun/Won’t miss out on the fun/Gotta get it while our hearts are young.” Crow kinda already said that over a decade ago, though, when she belted out, “I’m gonna soak up the sun/While it’s still free/I’m gonna soak up the sun/Before it goes out on me.” Carpe diem with a side of carpe diem, anyone?

Now, onto the videos. While it is true there are some major differences in the music videos of these lyrical twins, the portions that are similar are very, very similar.

Hilary Duff hooks up with Colbie Caillat for comeback single >>

In “Soak Up the Sun,” Crow strums her guitar while watching surfers in a way that feels totally organic. Because, you know, Crow is an outdoorsy, beach-loving kind of gal in real life. Duff’s video of a sun-soaked life feels decidedly less authentic. While she looks stunning, it’s as though she’s playing dress up. 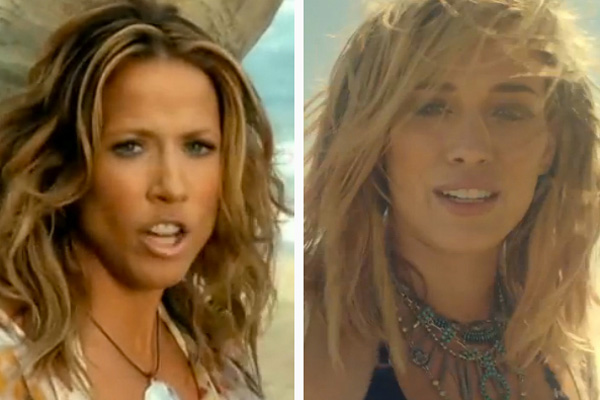 Duff, who may be having trouble letting go of her Lizzie McGuire days if her “office” acting is any indication, lets her hair down in the video when she goes from employee to beach bunny. Her “beachy” waves were likely created by a high-price hair stylist, whereas Crow is just the queen of beachy hair. 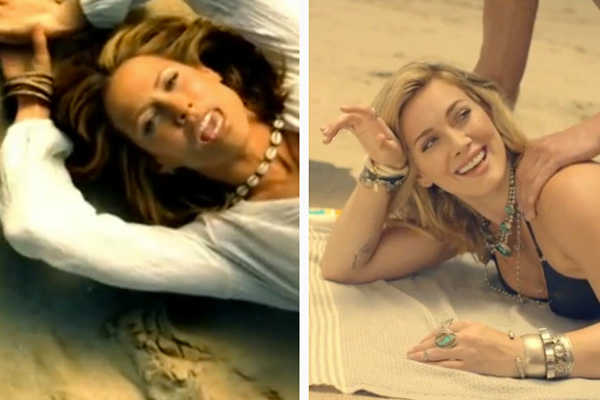 Next, Hilary does the next thing that feels appropriately free-spirited beach chick — pile on the jewelry. Loads of bangles, choker-style necklaces, natural materials and, yep, turquoise. Note the pile of bangles on Crow’s wrist, as well as her shell choker. She also sports turquoise jewelry through her own video. 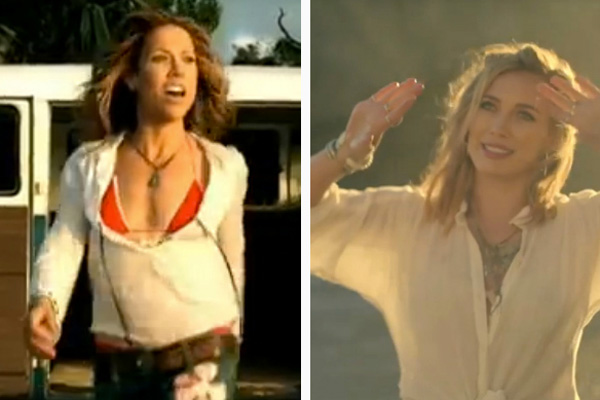 If you’re going for the beach chic look and want to wear more than a mere bikini, the fallback is apparently a gauzy, romantic white blouse. At least, that’s what Duff was thinking when she took a cue from Crow, who rocked the look with embroidered jeans in “Soak Up the Sun.”

Well, we’re just going to say it. When the music to Duff’s song isn’t playing, every time we try to sing it, we end up singing it to the tune of “Soak Up the Sun.” That should tell you something, shouldn’t it? It’s like when two people look so similar you always inadvertently call one by the other’s name. Nobody wants that situation, right?

We want to be on board with Duff’s carefree summer ditty, but it feels a teensy weensy bit like a “Soak Up the Sun” knockoff to us. But, hey, who knows… maybe it will grow on us. Until then, we’ll be jamming out to Crow, you know, with our 45 on so we can rock on.