Katy Perry revealed that she wants children, but she’s willing to do it with or without a man because we’re now living in the future and don’t need men to get babies.

The pop star told Rolling Stone magazine in an interview that she does desire kids, but if it comes down to it she will get a baby without a man if no one special enters into her life.

“I don’t need a dude,” she told the magazine. “It’s 2014! We are living in the future; we don’t need anything. I don’t think I’ll have to, but we’ll see. I’m not anti-man. I love men. But there is an option if someone doesn’t present himself.” 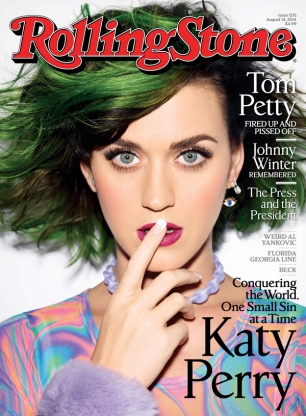 Luckily for Perry, she still has time to find a dad for her kids, as she’s in no hurry to become a mom just yet. “I don’t really want to take the child on tour. Not until, like, birth through 5 is over.”

Katy Perry’s “Roar” is about being her own biggest bully >>

The “Firework” singer added that when she does have children she wants to be able to care for them with the same focus and attention her sister gives to her own daughter.

“I see that my sister is completely devoted to [her] kid, 24 hours a day,” she said. “And so far, the little girl is so alert, so aware, so conscious, so beautiful, so happy, and I want to be doing that in the right time, and that’s not in the next two years, you know?”

Perry continued, explaining, “Maybe it’s in a five-year plan, but I need to really be able to focus 100 percent of my attention on it.”

As far as what man she’s looking for, the singer said she wants a “colorful” personality.

“I think you love who you love,” Perry added. “You learn over time. I mean, each one has been different. I tweeted the other day that I’m just looking for the prince that fits my glass Jordan’s slipper.”