With war raging around the world in real life, the new Hobbit: The Battle of the Five Armies trailer seems to be reflecting current events and it’s incredibly sad.

While it’s fitting that “Edge of Night,” the song that Pippin sings to Denethor in The Lord of the Rings: Return of the King, plays during the trailer, the music is slow and melancholy, with a Celtic feel. The lyrics speak of treading paths, unknown elements hidden in the shadows and uncertain fate. Clearly, the music is setting the tone for an epic battle we humans know all too well.

The Hobbit’s Tauriel vs. The Hunger Games’ Katniss smack down >>

The image of a statue of a leader smashed to bits on the ground reminds us of a war-torn city. It represents civil unrest and the broken dreams of citizens who want peace. Of course, no story would be entertaining or relevant without intense conflict, but we’re wondering if we’ve seen enough war on the evening news. 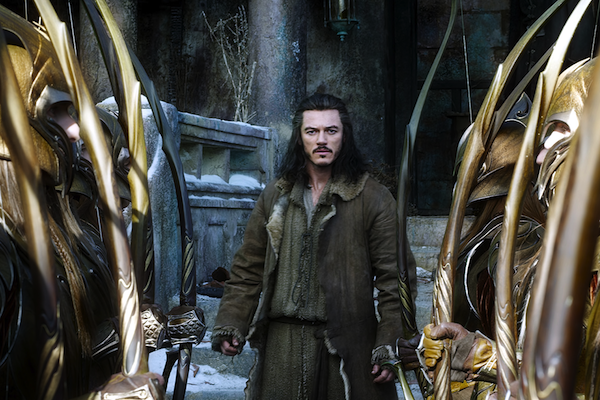 3. Dragon as a Godzilla figure

While the 2014 version of Godzilla tried to make the beast less threatening to mankind, the image of the giant lizard spewing fire on a city sends chills up our spines. It seems this trailer is trying to invoke some of Godzilla’s fire-breathing fury with Smaug the dragon as he soars over Lake-town, letting us know the world is out of control.

Why Godzilla is the new Zombie-Vampire >>

Gandolf (Ian McKellen) says, “Will you follow me, one last time?” implying this journey is coming to an end. The wizard, with his staff and white robe, is a father figure to many of the characters in the story. To us, it feels as if a family member is saying farewell. 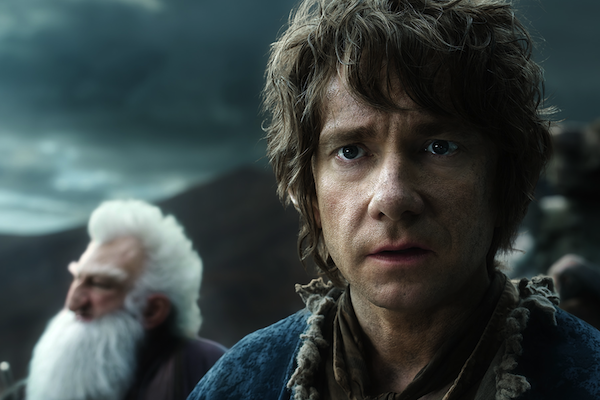 A kiss can be many things, but when Galadriel (Cate Blanchett) leans down to put her lips on the bruised and battered face of Gandolf, it reveals a deep love and respect between the two. The image is very powerful.

Thorin (Richard Armitage) is no different than many of today’s modern leaders who believe waging war proves a nation’s strength. We hope that one day, elves, wizards, dwarves, hobbits and even humans will find peaceful solutions to their conflicts.

The Hobbit: The Battle of the Five Armies opens Dec. 17.