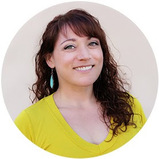 I, like many, may not be 100 percent on board with the casting of Boston-accented Ben Affleck, or Batfleck, as the next Batman. He certainly has a big cowl to fill, and I hope to be shocked and pleased by his representation. But when Gal Gadot was announced as the new Wonder Woman, I cheered a little.

Related story Gal Gadot Reveals Why She Loves Giving Birth: 'I Would Do It Once a Week If I Could'

Agree to disagree: Why some don’t like the new Wonder Woman >>

Why? Some people are just born to play a role. Can you picture anyone other than Emma Watson as Hermione Granger? I know I can’t, and I believe Gadot was born to be the Amazon Princess, daughter of Hippolyta, ambassador to the world of men, spreading the message of strength and love.

“Wonder Woman is noticeably tall and fair-skinned with straight waist-length black hair and blue eyes. She is ageless and attractive in appearance, sporting a slender yet curvaceous frame with a sizable bust and lean yet well-muscled build.”

Gadot’s got the height. She stands strong at 5 feet 9 inches and compared to her male counterparts, Affleck, 6 feet 4 inches and Cavill, 6 feet 1 inch, this girl is looking them dead in the eyes — when wearing her kick-a** heels, of course. Also, we can all agree that any woman who can run and fight in heels deserves everyone’s respect.

She has the gorgeous long hair.

Her look is timeless, and yes, she’s attractive. She sports a slender, yet curvaceous frame. She may not be a bodybuilder, but you can see a hint of her sculpted arms and legs in her strong stance. And yes, she has a sizable bust (*rolls eyes*).

So, let’s get real here for a second. Princess Diana is an Amazon from the island of Themyscira, aka Paradise Island, which has been described as being in a Mediterranean Sea-like region, or where modern-day Turkey is located. Um… last I checked, there are few ladies from that region of the world who have fair skin and blue eyes. Gadot doesn’t look overly ethnic, but she sure does look like she was plucked from an island in the Mediterranean, which is close enough since Gadot is from Israel.

Yes, they did away with the red, blue and gold color theme, but I’m willing to look past that since there are so many other cool details. The new look carries over classic staples like an eagle breastplate, tiara, bracelets, tall go-go-esque boots, sword and lasso — along with new styling, like leather-ribbed armor and the famous WW symbol that wraps her waist. All of which look like they were ripped from the pages of DC’s The New 52 Wonder Woman comics.

In my opinion, it’s about time they did away with the nylon swimwear suit. This new suit looks true to anything I can imagine when you consider that this is a skilled, Amazon warrior and not some girl who decided to become a superhero one day and put on the closest thing to her.

I do not get the impression that Snyder is making changes to the suit just to make changes. They seem like seriously thought-out decisions that adopt many elements from Wonder Woman’s 72-years-long reign and mashing that into a world where this woman really exists in the physical form.

I, for one, am happy to welcome Gal Gadot as my Wonder Woman, and I can’t wait to see the DC Trinity in action.