In Avengers: Age of Ultron, a new super heroine is heading your way and we think she may just steal Black Widow’s spotlight. Here’s why.

1. Elizabeth Olsen has something to prove

Scarlett Johansson has proved to the world that she can single-handedly carry an action film and bring the box office, like she did in the recent movie, Lucy. Those are big boots to fill, but we think Olsen is up for the challenge, knowing this role could really set her career on fire. Certainly, she’ll bring her A-game and we can’t wait to see what witchy powers she’ll display on the screen.

5 Reasons the new Godzilla is far better than the original >>

The Scarlet Witch — also known by her human name, Wanda Maximoff — is Quicksilver’s (Aaron Taylor-Johnson) twin sister. Brothers are always protective of their sisters, so we expect Pietro Maximoff to bail out his sibling should she get into too much trouble. Also, considering that Elizabeth Olsen is the younger sister of real-life twins, Mary-Kate and Ashley, she’ll have a deep understanding of the strong twin connection.

While Black Widow, also known as Natalia Romanova, was a trained Russian spy and supplied with high-tech weaponry, her ability is not the result of a genetic mutation. The Scarlet Witch, however, is the daughter of X-Men villain, Magneto, a mutant human with strong magnetic powers. Magneto’s little girl has been endowed with the ability to manipulate probability by using hexes. 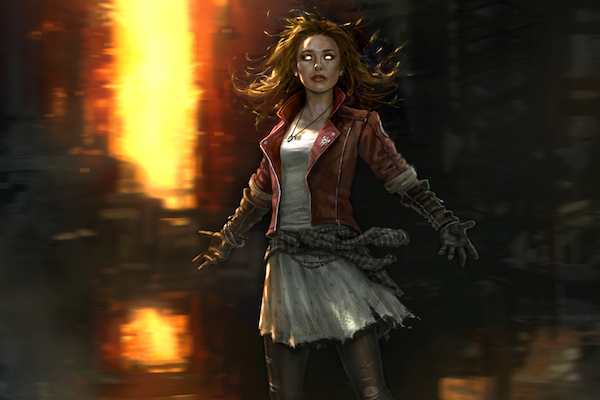 As the Scarlet Witch, Olsen wears a ruby-colored jacket, as displayed in the above concept art. The color red has its own symbolic history — given that it’s the color of blood, it’s often associated with passion, courage and revolution.

In the comic books, Wanda Maximoff and her brother, Pietro, lose their mother when they are very young. The siblings are out for revenge and this dark desire could lead them down a very sinister path. We like that the Scarlet Witch has the potential to be a villainess and use her powers for ill. She seems like she’ll be a much more dynamic, complicated character than Black Widow.