When it comes to eating healthy, the Anchorman star is trying all sorts of tricks and treats these days. From “froggy juice” to cocktails made with Tropical Pineapple Fruitwater, Applegate is putting her career on the back burner to focus on being a happy, thriving mom.

The former Married with Children star says that trying to stay healthy and to put her family first can be challenging. “Some people seem to do it with ease. It’s amazing that some women don’t finish off their kids’ mac and cheese, or in our house, vegan mac and cheese with quinoa. That’s really how I get to eat because I don’t have time to go make my salad.”

This busy mom relies on morning green drinks to get her vitamins. “My daughter Sadie and I both wake up and I make a big thing of green drink. I drink mine and she drinks hers so I know that at least we’re getting that.”

Christina Applegate is playing the role of dance mom >>

So how does Applegate convince her 3 1/2-year-old to swallow veggie juice? “You know, kids really do like it if you put some apple in there, some blueberries, maybe a little bit of banana, along with the kale, celery, carrots and cucumber. We call it ‘froggy juice’ and she loves it. She has no idea that I’m forcing greens down her throat.”

To encourage others to engage in a healthy lifestyle, Applegate is currently participating in a digital Fruitwater advertising campaign that centers on women taking time out of their busy schedules to focus on themselves. 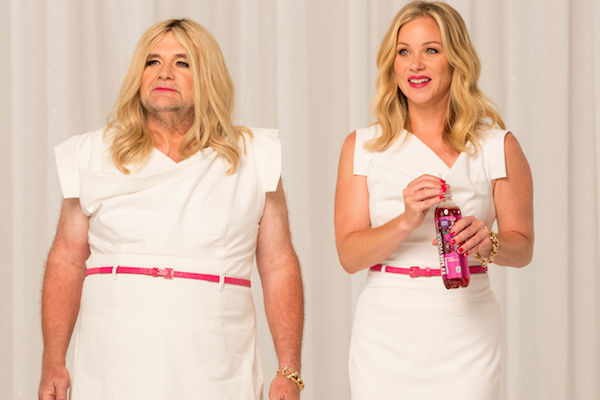 “It’s about ladies and mommies who don’t ever take the time to have treats because they’re running around like a crazy person or they just had a baby and they’re dealing with their baby weight but they want sweets — all the things that go on when a woman becomes a mom,” Applegate said.

So why Fruitwater over, say, plain black tea? “What you miss when you’re drinking some things is that sweet, refreshing factor. Fruitwater is sparkling and has zero calories. They just added two new flavors, Tropical Pineapple and Fizzy Lemonade, that also taste good with booze. They’re a good alternative to the sugary mixers you put with alcohol.”

In terms of her acting career, Applegate’s next project is the animated film Book of Life. She provides the voice of Mary Beth, the film’s narrator. “My character works in a museum and I’m telling the story to these little kids, and then you’ll see the story come to life about Día de los Muertos, or Day of the Dead. There’s a twist at the end, but I can’t tell you about it.”

The actress loved working with just her voice because she didn’t have to put on makeup, disclosing that she “really liked that aspect of it.”

In terms of coming back to television, Applegate doesn’t have any immediate plans. “I kind of wanted to take time off to be a mom, so I’m not really doing anything right now.”

But one project she’d love to do in the future is a remake of Sweet Charity. “I did the role on Broadway, and it’s a dream of mine to bring it to the screen again. She’s my favorite character I’ve ever played.”

Applegate also admits to being attracted to characters who are “dark and twisty” and to having a dark side to her own personality. “There will be a book someday. I’ll call it You Have No Idea,” she said.